We all pay when Liberal-National Coalitions at a state and federal level directly contradict each other on environment policy, writes Dr Oisín Sweeney of the National Parks Association of NSW.

The background to the current chaos

Well new at least. Contrary to its name it looks set to weaken protection of the environment across the board. It will broaden the application of the ‘Major Offsets Policy’ which was the subject of a damning independent review by a top scientist and is much weaker than the recommendations made by a Federal Senate Committee.

It looks set to increase the incidences where self-assessable clearing can take place by landholders — justified by a requirement to recreate nature in set-asides and offsets which, we know is dodgy at best, and an increase in funding for private land conservation that hasn’t yet been agreed to by Treasury. And of course it repeals the Native Vegetation Act which, although not perfect, dramatically reduced land clearing.

At the federal level, the Coalition is still trying to recover some credibility in environmental policy after the Abbott era. Environment Minister Greg Hunt is doing his best to distract everyone from his involvement in the national embarrassments that were the attempt to carve off a bit of the World Heritage Tasmanian Wilderness for logging and UNESCO’s threat to place the Great Barrier Reef on the ‘World Heritage in Danger’ list.

Other notable crusades during his tenure include the repeal of the carbon tax, the attempt to unwind the Clean Energy Finance Corporation, the reduction of the Renewable Energy Target and the inclusion of ‘wood waste’ as a source of renewable energy, which threatens a new era of native forest destruction.

Yes, trees. Who would have thought that trees could be such a source of contradiction? Yet they are. Greg Hunt, in his capacity as minister for cities, is planning to increase urban canopies as part of a strategy to reduce extreme heat in Australian cities.

But at the same time, people in Sydney’s eastern suburbs have been chaining themselves to 100-year old fig trees to prevent them being chopped down.

It gets worse: the 10/50 laws, introduced by the Baird government despite repeated warnings that the system was open to abuse, have resulted in the loss of thousands of heritage trees across Sydney and beyond. Ostensibly to reduce fire risk but in many cases to improve views and clear blocks. 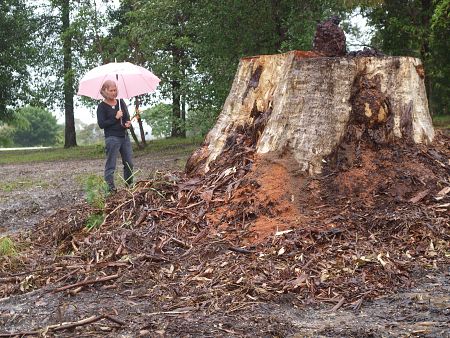 Big old trees are being lost at an alarming rate in urban areas across NSW — with implications both for wildlife and the character of our towns. (Image: Lyn Orrego)

If the contradiction over trees is bad, climate change is downright farcical. Setting aside for a moment your views on the wisdom or otherwise of the Direct Action policy, avoided emissions via retaining native vegetation have been the cornerstone of federal efforts to reduce emissions. In fact, $673 million dollars (55 per cent of the total bucket) has been spent on projects involving vegetation.

And where has most of that money gone? Yes, you guessed it: NSW. One hundred and twenty eight of the 236 contracts awarded are in NSW.

And what is NSW doing? Putting in place legislation that will almost certainly result in an increase in land clearing. Or, to put it another way, undo the emissions reductions achieved via the federal Direct Action policy. 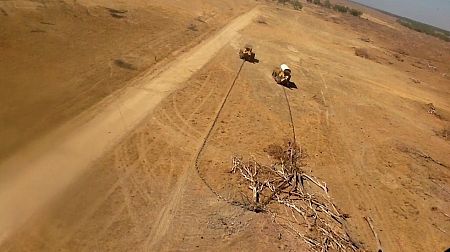 Bulldozers and chains being used to clear vegetation in Queensland. The loss of native vegetation undermines efforts to tackle climate change. (Image: The Wilderness Society)

Besides the chronic waste of valuable tax dollars – in an era where cuts to everything and anything are on the table – this is incredibly hypocritical on the part of Australia. Malcolm Turnbull’s signature on the Paris Agreement is barely dry and Australia now has an obligation to do all it can to keep the global temperature increase below 1.5oC.

Yet the new Biodiversity Conservation Act in NSW will not even consider climate change and an increase in emissions from the legislation. It is difficult to believe that in 2016, new legislation purporting to protect biodiversity will not even consider the greatest threat to biodiversity. It’s doomed to fail before it has been introduced. And because Australia is so vulnerable to climate change, it will fail the citizens of NSW as well as nature.

Environment groups in NSW were optimistic when the Baird government came to power. Hopes were especially high for then environment minister, Rob Stokes, on the back of comments such as ‘environmental protection is not an optional extra’ and ‘we want…economic development but…not at the cost of the environment’.

But the Baird government is comprehensively failing on the environment in every area bar sharks.

And those words from Rob Stokes? Well, they look like hot air. And we can expect plenty more of that thanks to the NSW native vegetation reforms.