Australia needed to close its border to Omicron, the new COVID variant.

But why would Prime Minister Scott Morrison and his Government make such a brave leadership decision in the national interest when the news media frames such action as villainously "controversial"?

The COVID pandemic sure has a warped sense of humour. The latest instalment – the ominous Omicron variant – is like a television series which appeared to be coming to its last ever episode but has thrown up a new twist to extend the series for another season.

Just as the world was starting to believe that "living with the virus" was possible in the post-vaccinated stage and the biggest problem was people who refused to take advantage of a life-saving vaccines, Omicron will likely stall "freedom" plans, eventually forcing governments to shut borders again; to put in place restrictions to stop the new variant’s rapid spread; to scramble to adapt vaccines and have people vaccinated.

Leaders will also have to convince a weary and frustrated population that the pandemic is not over, whether they’re fatigued by it or not. 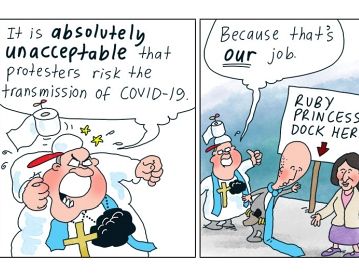 The Coalition and some media outlets have capitalised on the COVID-19 crisis for political points, says Grant Turner.

As soon as I heard about the new variant, the words of WHO’s Dr Michael Ryan came to mind:

“Be fast. Have no regrets. You must be the first mover. The virus will always get you if you don’t move quickly.... If you need to be right before you make a move, you will never win."

Dr Ryan said this on 16 March, 2020. Four days later, Australia closed its borders to international travellers. This might seem like Australia was acting swiftly, but it’s easy to forget that by this date, there were 167 cases recorded in Australia, and the seven-day moving average was 97. 80 per cent of these cases came from overseas.

Tellingly, international borders were shut six weeks after Australia banned Chinese travellers, with the cases coming into Australia instead from countries such as the UK and the U.S. Indeed, Peter Dutton tested positive for COVID-19 on 13 March, a week before borders were closed, after returning from a trip to the U.S.

Morrison was not the "first mover" when COVID-19 first emerged. And he won’t be the first mover with Omicron.

As I write, the border to South Africa is not closed, despite the scarily contagious COVID variant already spreading from South Africa to Europe, Israel and Hong Kong. There are rumours today quarantine might be reinstated for South African travellers, but the virus is already out.

To act swiftly and proportionally to the threat of Omnicron, Morrison should have moved fast by closing Australia's international border yesterday, which he’s just opened to much fanfare. But closing it would take political courage and leadership that Morrison just does not possess. The reason it would take courage is because COVID restrictions have been politicised as villainous; politicised by Morrison himself in concert with the news media.

A report by the University of Canberra News and Media Research Centre found during the first half of 2020, COVID was reported using a consensus view of the crisis: the country came together to deal with the threat through international border closures and national lockdowns. These restrictions were framed by the media as necessary – as heroic actions by the Morrison Government – to deal with the unprecedented threat of a pandemic.

The report found this changed when the second wave of the virus hit Victoria. The framing of this crisis is described as a ‘return to politics as usual’. This framing constituted a sustained ideological and political attack – led by Morrison, and reinforced by then-Premier Gladys Berejiklian, with the support of many journalists – by characterising health restrictions as an oppressive enemy.

The restrictions are not the enemy: the deadly, highly contagious virus is.

Once journalists accepted Morrison’s anti-interventionist "let’s live with the virus" posturing, this narrative led framing of all health restrictions as evidence of overreach by Labor state governments.

It wasn’t just Premier Daniel Andrews, who suffered from this framing. He had the worst time of it because Victoria had the most virus spread to deal with. It was also Labor governments in Queensland and Western Australia who were dubbed "dictators" for closing their borders quickly and keeping them shut too long.

It’s hard to believe that health policies which successfully protected the public from mass-spread of a deadly virus – lockdowns, compulsory masks, restrictions on movement, curfews – could be framed negatively, when the alternative is mass death and an overwhelmed healthcare sector. But this is what the news media served up.

And despite NSW being dragged to these same restrictions slowly, days and weeks too late in each case – eventually implementing almost identical restrictions to Victoria – this delay was never critiqued as problematic by the news media and indeed was applauded as proportionate. Even when it emerged that all this slowness went against health advice, Gladys received barely a hint of criticism.

It’s also incredible to think the states who stuck with their zero-COVID guns by keeping borders shut – Western Australia and Queensland – were framed as too restrictive. History shows the result of COVID-free living was minimal disruption to the lives of a COVID-free public, apart from travel restrictions which the public showed they were more than willing to accept if it meant avoiding death and disease.

It’s worth mentioning too that South Australia and Tasmania kept their borders shut too, but didn’t get anywhere need as much scrutiny for that. They are both Liberal-run states.

Going fast, and going hard – like Dr Ryan urged – was always framed by the news media as the actions of a dictator, as government overreach, as disproportionate to the threat of the virus. 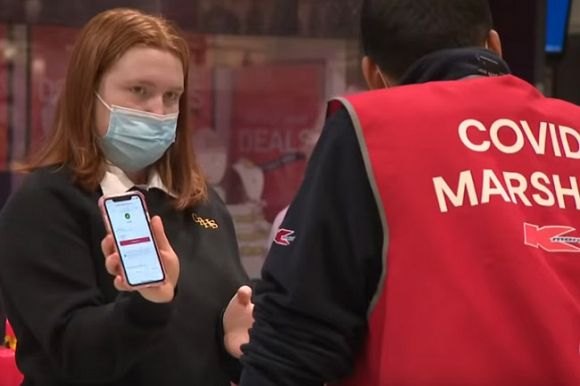 Through careful management and planning, it would be possible for the Australian Government to take control of the COVID-19 pandemic.

As I sit here in South Australia, a state who has unfathomably given away its precious COVID-zero status, I watch how this decision by a Liberal premier has been applauded by news media with scenes of relieved travellers flooding into the state. The resulting cases of COVID, which have destroyed our carefree living in South Australia are met with a shrug of "well, this is the inevitability of living with COVID".

The news media set the frame for what is considered good news, bad news, normal, controversial and outrageous.

As Australians watch Omicron sneak closer, sitting ducks with a government who don’t want to pause their election campaigning to deal with this new threat, who have no interest in building dedicated quarantine facilities and instead let the Labor states do all the heavy lifting as usual, I wonder how on earth the health restrictions which have saved tens of thousands of lives in Australia could possibly be demonised when they have saved countless lives.

And governments brave enough to implement them should be applauded, instead of attacked.

19 September 2022, 4:00pm Twitter can remain a place of rich debate if we refuse to accept simplistic solu ...