Scott Morrison claims that he speaks for "quiet Australians", but he doesn't appear to be listening on issues like domestic violence and sexual abuse, writes Dr Ray Barraclough.

GIVEN THAT spiel is a basic language in political doublespeak, one need not be surprised that a conservative marketing group, or representative, has come up with the term "the quiet Australians".

There are various layers of perception built into the term’s use as we shall see. These range from attempted testing of such quietness through to hypocritical use of the term.

One is reminded that American President Richard Nixon repeatedly made the claim that he was speaking for “the great silent majority” of his country. One can note that he was not a member of such a group since he was making a noise in speaking.

Also, in regard to the original use of the phrase, he was not speaking for any living American. First references to the phrase can be found in the late nineteenth century in the United States. Then, the phrase "the silent majority" referred to those who were dead. It was the occupants of cemeteries, not voting booths, who were in mind in the use of the phrase.

I first encountered an echo of that phrase when I was a young teacher at a state high school in Queensland — each issue of the Queensland Teachers' Union Journal announced the death of teachers under the heading: 'The Silence Has Claimed'. 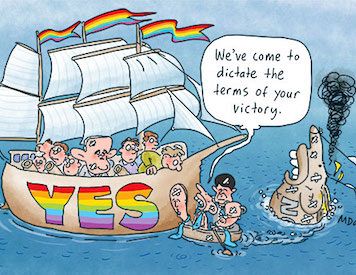 'Such is the privilege of the religious conservatives, they feel that disagreement with their beliefs is tantamount to persecution.'

We currently hear that a particular political party claims to speak for “quiet Australians”. As noted, speaking disqualifies it from being quiet itself. And we have not been told what listening devices have been used. Does it entail phone tapping? Are emails being monitored? Has there been hacking?

If such a unified (living) body exists as “the quiet Australians” or “the silent majority”, then presumably the clearest indication of such a group’s support for an issue or policy comes through it being tested in a referendum or a plebiscite.

The most recent instance of such testing was the plebiscite in regard to saying “yes" or “no” to the proposal that same-sex marriage is legalised in Australia. The results of that plebiscite were that the majority of voters in all Australian states and Territories (who by the way voted quietly) voted “yes” while a minority of voters voted “no”.

It is worth noting that Scott Morrison – who supported a “no” vote – did not have the courage of his publicly expressed conviction to attend Parliament to vote in the House of Representatives when the majority of Australians quietly voted contrary to his position. Observing his action (and inaction) there seems to be a sense of vacuity (or is it an aroma of hypocrisy) to his claim to speak for "quiet Australians".

The word “quiet”, of course, is ambiguous. Does one claim support from those who quietly accept levels of abuse of children, or of illicit drug use? And then there is the great Australian silence in our history over the practice of domestic violence against women and children. Is that the quiet Australia we wish to perpetuate? 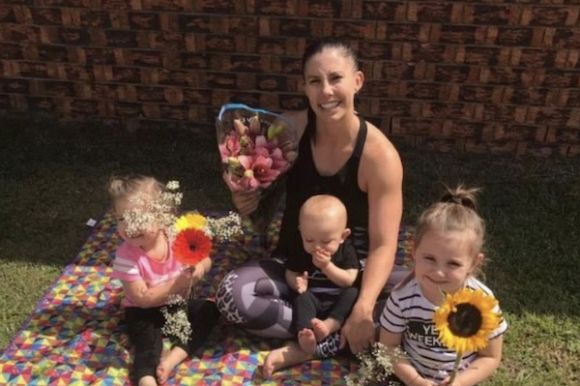 The PM spoke this week about the system failing Hannah Clarke and her children, and he promised to act.

And we are reminded that so many perpetrators of abuse threaten the victim to remain quiet — to be silent.

This year our attention has been drawn to the violence and abuse experienced by women. That came into clear focus in the person chosen to be Australian of the Year, Grace Tame.

We witnessed the Prime Minister awarding Grace for heading a movement that sought the removal of laws silencing victims of sexual abuse. Here was a movement seeking to end the quietness of Australians in the face of this particular scourge of violation in our society. With hindsight on the political spiel being voiced by the Prime Minister, what sad irony was present in his making that presentation!

As one looks at other countries, currently we are seeing particular governments strenuously committed to keeping their citizens quiet. One can think of the quietening of the protests in Myanmar and Hong Kong. Are those who have not remained quiet to be regarded as noisy troublemakers?

And who appoints these rulers or prime ministers or junta leaders as spokespersons for these quiet or quietened citizens?

With this article, I have broken silence. Should I retire to a quiet corner and leave the spielers undisturbed?

Dr Ray Barraclough is a member of the Management Committee of A Progressive Christian Voice (Australia) Inc.

31 May 2020, 4:00pm The scourge of domestic violence has intensified during the lockdown period and the ...

The disconnect between political piety and bush fire reality

18 January 2020, 11:00am Scott Morrison has faced a lot of criticism for his religious beliefs, but as Dr ...
Join the conversation
comments powered by Disqus
News updates