Should we be taking our kids to anti-Abbott protests and inculcating them in our progressive beliefs? RJ Gosling says: yes.

We were at the Sydney Anti Abbott March in March and my daughter was frowning at the flat white sipping umbrellas around us.

“Because he’s bad to refugees.”

We explained what refugees were.

“And he’s bad to the barrier reef”.

My wife is a teacher so we leaned on Gonski, but six-year-olds are not really geared to liking school.

On my shoulders, she caught the beat of Hey Hey, Ho Ho, Tony Abbott’s Got To Go. She loves singing and was soon joining in, arms waving, shouting in my ear as I sweated the walk to Victoria Park.

I’m too polite to protest, it's the residual English in me, so as people bellowed their anger at Abbott I mumbled mine and added polite footnotes to my daughters’ enthusiastic chanting:

(If you wouldn’t mind, would it be possible.)

“Tony Abbott Has to Go!”

(If that would be OK, thanks)

Come the march in June, she was keener.

She explained what was happening to her brother who’d been lost in Minecraft with an ankle injury in March.

She drilled him loudly, chanting on the bus”

He was eight so his reading was better and he asked the inevitable:

“Dad, why are they wearing ‘F*ck Tony Abbott’ t-shirts?”

“Mate, you didn’t need to say the word out loud”

My daughter came to the rescue:

He joined in unenthusiastically and we walked, her on my shoulders again chanting with gusto.

The other marchers were mostly on good form but a few pushed the boundaries of what I wanted my kids to see. Girls spattered in blood declaring their vaginas against Abbott had me turning my sons head this way and that to keep him from asking about vaginas.

For the march in August we made signs.

“I think Tony Abbott is the worst person ever. Stop ruining the country I’m growing up in.” 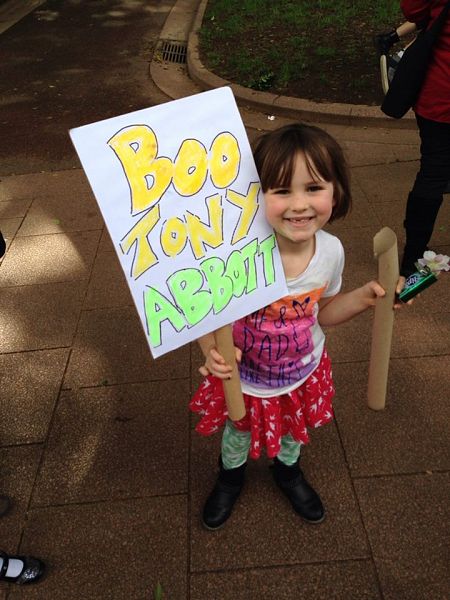 My daughter, in pastel:

I was very proud.

Carrying a six-year-old with a sign like that gets you attention and a journalist asked if he could interview me.

As he pulled out his pen and flipped over his pad, my mind went utterly blank.

“What are you marching for?”

I heard myself say:

“It's a vibe thing, I’m marching for the vibe … of Abbott being bad … you know.”

“Boo Tony Abbott, we hate Tony Abbott, he’s killing the crate carrier reef and doesn’t like my mum cause she’s a teacher.”

The photographer took her picture and my vibe quote didn’t make the paper. The journalist was from The Telegraph, so I wasn’t too upset.

My kids’ Walk to School Day fell between marches.

TV crews were there with puff piece journalists dressed in shades of yellow, orange and lipstick. My kids ran high fiving into the crowd.

Come the right time, the school population walked (marched) towards school and my daughter looked at me.

“Is this a protest?”

“It is a bit isn’t it? Less shouting though.”

Less angry vaginas and less t-shirts with the F word as well I thought.

The kids from Fame flashed to mind and I watched as my daughter took off, shouting at the top of her voice.

Kids believe whatever you tell them. Santa Clause, the Tooth Fairy, and the Easter Bunny. If you tell them so they believe racism is acceptable, that God exists, that abortion is evil, or it’s okay to drive home after a few beers.

My wife and I are leading our kids in protest against Abbott. Is that a huge leap from being in The Westboro Church picketing abortion clinics and homosexuals with their kids?

It’s the same shoes, certainly, but a a very different path — at least in my opinion. I’m deliberately raising happy little atheist socialists. I feel as comfortable with this as extremist parents likely do telling their kids Intelligent Design is fact. What is apparent to me though is my kids like people ‒ pretty much all people ‒ they just don’t think much of Tony Abbott.

On Walk to School Day, my son caught sight of his sister and started shouting with her and, like an overweight New York taxi driver surrounded by choreographed kids from the School of Performing Arts, I joined in and we did the show right there.

Protesting is a good show, even the rough edges and Anti Abbott Vaginas. Even with the ‘F*ck Tony’ t shirts.

Tony Abbott masked protestor carries a happy child through the crowd at the Sydney March in March (Image by Stephen Gilandis via abc.net.au)

Take your kids, teach them to shout a good message.

There is a ‘Rally against Abbott’ on in Melbourne this afternoon, starting at 2pm. Click here or on the image below for more details.

The X-man with IA's new 'Liar bird' bag, with @JohnGrahamArt design. We'll let you know soon how you procure one. pic.twitter.com/yHyNdnCI1D

How you *may* procure one, that is. pic.twitter.com/pPVrRVYTaC

Can I get a Hallelujah?

2 November 2014, 11:30am RJ Gosling is a faith healer. He never used to be, but he cracked it at a wedding ...
Join the conversation
comments powered by Disqus
News updates