Offensive, ain’t it. You bet!

The National Redress Scheme for victims and survivors of institutional child sex abuse not only gives the finger to the recommendations of the Royal Commission into Institutional Responses to Child Sex Abuse, but also demeans the long term impact, suffering and the life shattering consequences, mental and physical impairment endured by victims of sexual assault in the wider community.

Our reprehensible government, the Coalition, in particular the Catholic Church notorious for its industrial-strength child sex abuse, other guilty churches and institutions have joined at the hip pocket to collude in a show of cynical financial ecumenism to reduce, in some cases by tens of thousands of dollars, the redress payments to victims.

The political cowardice of federal and state governments to collectively enforce the Royal Commission’s recommendations reflect the awful obeisance to guilty institutions and heartless disregard for the lifelong horrors of survivors and families.

Moreover, these very institutions have spent millions during the decades in cover-ups and securing the silence of victims, more latterly in defending the indefensible before various enquiries, the Royal Commission and court cases.

JUST AS WELL PELL NO 'NO WIN, NO FEE' CLAUSE WITH LAWYERS

Pell's attempt to have a wink and a nod with the Commission backfired on him and his lawyers.

Just as well there isn't a "no win, no fee" clause in Pell's legal team's contract, given one QC alone is reputed to be earning $20,000 a day, three times more than what some abuse victims were paid in compensation and a 100 per cent more than hundreds of others.

If the financial redress recommended by the Royal Commission is to be regarded as a just punishment and a "sentence" to fit the crime and the consequences of that crime, then how is it that the criminals are allowed to reduce their own sentence/punishment?

The National Redress Scheme is an utter farce. It does not reflect the recommendations of the Royal Commission.

These churches and institutions are invariably weighed down with riches but for some, their pastoral and religious ardor is so shallow that they would rather sell their churches than dig into their substantial cash assets.

Independent Australia has been told that George Pell is still receiving his Cardinal’s salary from Rome, estimated in his case to be at least 8000Euros ( about Australian $12,000+) monthly with additional allowances and perks, lavish living quarters, generous travel and entertainment expenses, and rather than stay at religious institutions, the Cardinal apparently prefers to stay at five-star hotels, as once befitted his office as head of the powerful Secretariat for the Economy, now a far cry from his current habitat, the Melbourne Assessment Centre, that does not place chocolate on your pillow at night.

From there, Cardinal Pell will probably be moved to Ararat Prison. He continues to protest his innocence and his lawyers have lodged an appeal against his conviction.

This brings me to make a direct connection between the vile, repugnant remarks of Cardinal Pell’s star lawyer, the once lauded and now much diminished Robert Richter QC, and the shocking insult to the dead and survivors of sexual abuse that is the National Redress Scheme.

Richter you will recall, as quoted in Independent Australia  on March 5th in an article https://independentaustralia.net/life/life-display/cardinal-george-pell-the-ice-cream-rapist,12439 headlined:

... had the gall to describe his client’s sexual assaults of two 13 year old choir boys as “... no more than a plain vanilla sexual penetration case where the child is not volunteering or actively participating.”

Such vile diminution of the heinous crime of rape and other forms of sexual assault borders on toxic verbal assault and acquiesces to the appalling notion that if a victim is not “volunteering or actively participating ” – in Pell’s case, rape – then the perpetrator is deservingly described as engaging in “ no more than plain vanilla sexual penetration.”

The vindictive words remain both an assault and insult not only for Pell’s victims – one of whom died from a heroin overdose and was not to see his abuser convicted – but is also an assault on all victims of rape and other forms of sexual abuse, regardless of age or gender.

The words are perverse and obverse victim blaming. And so is the NRS.

The obscene conditions and compensation caps it places on survivors blatantly ignores the Royal Commission’s recommendations and have curdled the community’s high hopes for meaningful justice and it has corrupted the spirit engendered by the Commission. Survivors are being trashed.

Judy Courtin, the renowned legal warrior and advocate for victims/survivors, families and others affected by the institutional child sex abuse epidemic has been fighting for months for reform and changes to the NRS to comply with the Commission’s recommendation.

Her fight has not been confined to her own clients — but to all affected by the NRS.

She’s had a gutful of the injustice, subterfuge and obfuscation of institutions connected with the NRS, and has organized a public rally in Melbourne this Sunday, outside Parliament House, Spring Street at 11.30am.

Musician Justin Brady, has written a song specially for the rally 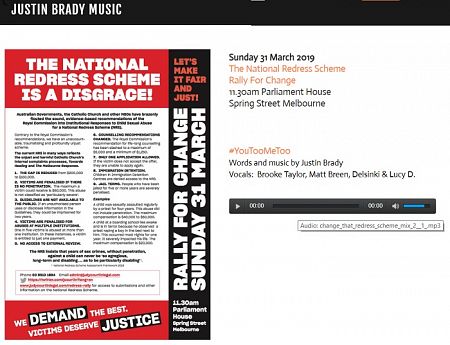 (To listen to “#MeTooYouToo – change the Redress Scheme”: Click here)

Courtin, an IA contributor has conducted forensic strength investigations and research into institutional sexual assault crimes and justice, particularly within the Catholic Church. Her submissions make for horrifying reading and heartbreak, and great shame for what children endured then — and what they now endure as adults.

On 21 September last year, Courtin who now runs her own legal firm, sent a ten page submission to the Joint Select Committee on the Oversight of the Implementation of Redress Related Recommendations of the Royal Commission into Institutional Responses to Child Sexual Abuse.

It reads in part:

We refer the Committee to the public submission of the Australian Lawyers’ Alliance (‘the Alliance’) concerning the maximum redress payment, including the Act’s provision of the $150,000 maximum payment compared to the $200,000 recommended by the Royal Commission.3 We fully support the criticisms made by the Alliance.

Our practice has already experienced what we consider to be a cynical advantage taken by one potential defendant institution of the fact that the maximum payment under the scheme is lower than that recommended by the Royal Commission.

Prior to the commencement of the Scheme, the institution was engaged in pre-litigation communication with us concerning a claim by our client, but has recently refused to continue this process towards a possible settlement and has instead referred to the Scheme.

We believe that this expression of lack of good faith would have been less likely if the maximum repayment had been the higher amount recommended by the Royal Commission. Consequently, our client has no choice but to endure further delay and trauma.

The flyers for the rally pull no punches and remove the legal gobbledegook and pettifoggery:

Australian Governments, the Catholic Church and other NGOs have brazenly flouted the sound, evidence-based recommendations of the Royal Commission into Institutional Responses to Child Sexual Abuse for a National Redress Scheme (NRS). The current scheme is unaccountable, traumatising and profoundly unjust.

2. VICTIMS ARE PENALISED IF THERE IS NO PENETRATION.

The maximum a victim could receive is $50,000. This abuse is not classified as ‘particularly  severe’.

3. GUIDELINES ARE NOT AVAILABLE TO THE PUBLIC. If an unauthorised person uses   or discloses information in the Guidelines, they could be imprisoned for two years.

4. VICTIMS ARE PENALISED FOR ABUSES AT MULTIPLE INSTITUTIONS.

One in five victims is abused at more than one institution. In these instances, a victim is entitled to just one payment.

The Royal Commission’s recommendation for life-long counselling has been slashed to a maximum of $5,000 and a minimum of $1,250.

7. ONLY ONE APPLICATION ALLOWED.

If the victim does not accept the offer, they are unable to apply again.

Children in Immigration Detention Centres are denied access to the NRS.

9. JAIL TERMS. People who have been jailed for five or more years are severely penalised.

The NRS insists that years of sex crimes, without penetration, against a child can never be ‘so egregious, long-term and disabling... as to be particularly severe.

...We demand that the current National Redress Scheme be completely overhauled. All the Royal Commission’s recommendations must be implemented.

Maybe’s Richter’s rant was also fuelled by the mention of “vanilla” sex in Fifty Shades of Grey and the ever contested ambiguity of sexual consent between adults. But as with Richter and the NRS, we are talking about redress for what happened to people when they were children – and how the sexual abuse infected their lifestream like an incurable sexually transmitted disease or virus – into adulthood and old age.

With the National Redress Scheme, we have more than 50 shades of Justice. All of them dismal and in contempt of the goodwill and trust that the community invested in the Royal Commission’s outcome.

Victims are treated as the last – and not the first – among equals.

SUBMISSIONS REGARDING THE SCHEME

SUBMISSION REGARDING DEEDS OF RELEASE

The work of this Commission, and particularly the stories of survivors, may bring up many strong feelings and questions. Be assured you are not alone, and that there are many services and support groups available to assist in dealing with these. Some options for advice and support are listed below:

24/7 telephone and online crisis support, information and immediate referral to specialist counselling for anyone in Australia who has experienced or been impacted by sexual assault, or domestic or family violence.