With the High Court today adjourning the Federal Government’s challenge to the ACT’s same sex marriage laws until December, some ACT residents may have time to benefit beforehand. 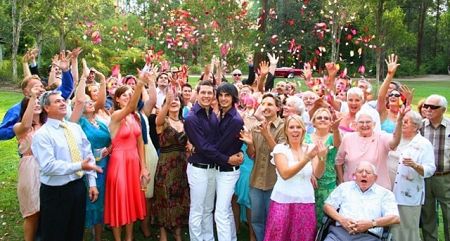 THE FULL BENCH of the Federal Court has today set aside a two day hearing for the Federal Government’s challenge to the ACT same sex marriage laws.

The ACT Marriage Equality Bill was passed by the ACT Legislative Assembly late last month by just one vote (9-8). However, within 24 hours of it being passed, Attorney-General George Brandis announced a challenge to the Bill.

The Commonwealth had sought an expedited hearing for the challenge to prevent any same sex couples being married under the new provisions.

However, with the two day hearing being set down for December 3-4, there is a good chance some same sex couples will able to benefit from the new laws irrespective of the result of the challenge.

With same sex marriage now legal ‒ however temporarily ‒ in the ACT, there is speculation that NSW may follow closely behind thanks to new legislation being debated in that State.

The ACT and NSW could be heading a national movement as Tasmania, South Australia and Western Australia also progress in redefining marriage.

Alex Greenwich, the member for Sydney – the electorate with the highest number of same sex couples nationwide and a major contributor to the Bill – said community feedback has been positive.

“I think the whole nation has been having a discussion about marriage and its thanks to same sex couples …  and what its come down to is it's about love and commitment... we are not fighting hard to be able to celebrate the benefits of marriage because we want to destroy it. State based same sex marriages are possible because of amendments made by the Howard Government.”

Constitutionally, State and Federal Parliaments share marriage as a concurrent power, meaning States are able to legislate for any area not covered by Federal Law, same sex couples being one such area, said Greenwich.

This means opponents of same sex marriage would have to prove same sex couples are covered under the Commonwealth Marriage Act (1961) and that the new law would leave someone disadvantaged, leading proponents of the Bill to think legal reform an inevitability.

Both Bills could also be overruled by a vote in Federal Parliament.

Opponents of the reform say there will be significant opposition to any change.

“I don’t think there's anything inevitable about the Federal Government trying to redefine marriage. The last Parliament … was probably the best chance that the advocates of change were ever going to see [but] I'm not taking anything for granted, I think if a Bill were to come up in Federal Parliament it would require a lot of hard work to see it defeated.”

The NSW Same-Sex Marriage Bill has an explicit exemption for churches, unless they register to marry same-sex couples.

Hutt said that provision gave his organisation no comfort:

“I wouldn't take any comfort from that whatsoever... you only have to look at other jurisdictions around the world where there has been a movement towards same sex marriage [to see] that any assurances that have been given to churches are pretty shallow. Within less than 12 months of the UK redefining marriage legally, we are seeing the beginnings of a legal challenge in the courts that would, if successful, force churches to solemnise same sex weddings.”

Florist Olivia and solicitor Danielle King-Downie from Dulwich Hill consider themselves married and have recently had their first child through in vitro fertilisation (IVF).

Though they have had their big day they still think the state of current legislation is an issue for both equality and choice.

According to Danielle, the laws should be simplified:

“With a de facto relationship, it just kind of sneaks up on you because it depends on the time you have spent together rather than if you have made any formal commitment to each other, whereas a marriage is an opt in relationship... [The law is] trying to make everybody have these complicated relationships with each other when really all we need is a unified opt in system.”