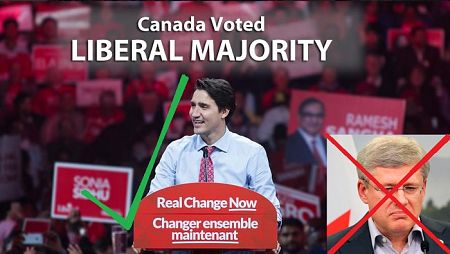 After a grinding 78-day campaign, Canadians have voted overwhelming for Justin Trudeau, 43, to be their new prime minister. Trudeau, leader of the centre right reformist Liberal Party, is son of Pierre Trudeau, who was prime minister for most of the period from 1968 to 1984.

Of the 308 seats in the House of Commons at the 2011 election, Harper’s rigid Conservatives held 166; the leftist New Democratic Party (NDP), led by Tom Mulcair, held a healthy 103; and Trudeau’s Liberals had only 34. There were five minor party members. All that has changed.

Trudeau now has an overwhelming majority and does not need a coalition partner to govern — an outcome predicted as an outside chance only for Harper. The new 338 seat chamber looks likely to have about 189 Liberals, 103 Conservatives, 35 NDPs and 11 others.

So what else have Canadians voted for? It is too early for considered analysis, but observations likely to emerge include...

There will be jubilation worldwide among delegations preparing for the world climate summit in Paris in December. The two national leaders with a tawdry history of undermining global progress have disappeared within five weeks of each other — Harper by the vote of his people today and Australia’s Tony Abbott by the vote of his caucus last month.

Harper’s principal three-word slogan was “Protect our economy”. His pitch to voters was basically: You are better off now than ten years ago. That’s due to me. Don’t risk change.

“In the past ten years I believe our Conservative party has led this country forward during a difficult time, to be more prosperous, more united, more proud, more secure than ever before.”

It is true Canada survived the GFC better than most countries. Its stimulus response in 2008 worked effectively to limit the recession to just three quarters and keep the jobless below levels in Europe and the USA.

From 2008 to 2013, Canada’s economy had risen from 13th in the world on the IAREM rankings to an impressive seventh — behind Australia, Norway, United Arab Emirates, Singapore, Switzerland and Luxembourg. By 2014, however, Canada had slipped back to 11th. Rankings for 2015 are not finalised, but it appears Canada has tumbled further.

Today, Canada is in recession — the only developed country in that situation and one of only eight in the whole world.

Canadians voted for fiscal management with a priority on jobs and growth over deficit and debt reduction. Trudeau said he would need to run budget deficits – that is, spend more than the nation earned in revenue – for the next three years. That seemed a foolish strategy to some, as his two principal rivals promised to balance the budget.

So it seems voters are not unduly scared of continuing debt and deficits. They prefer stimulus to austerity. Either that, or they just didn’t believe Harper and Mulcair.

Preying on the fear of Muslims appears to have failed. The Conservatives tried to use as a wedge the divisive matter of a law requiring Muslim women to remove the niqab during citizenship ceremonies. This and other crude attempts to play the race or religion cards all appear to have backfired.

Electoral strategists Lynton Crosby and Mark Textor, who worked for John Howard in Australia and David Cameron in the UK, were hauled in to assist Harper’s campaign.

The Guardian reported this with a story headed:

Various conflicting reports then appeared about the progress of the pair and whether or not they were still assisting the Conservatives.

Last Thursday, the National Observer reported a rift in the relationship in a piece headed

The story did not explain why Crosby abandoned Harper – no-one is speaking on the record – but did profile his successes in Australia and elsewhere, including the infamous "Children Overboard" affair.

Is it too much to hope that the Canadians were just not buying the Crosby-Textor brand of dog whistle politicking?

These were proven spectacularly wrong. Most polls over the last month suggested the Liberals would get between 35 and 39% of the votes, Conservatives 29–33%, NDP 20–26%. This was nothing like the actual outcome. The Liberals appear to have achieved more than 44%.

Voting is not compulsory and voter turnout has declined in recent years to around 62%. It appears this time around that Liberal supporters have turned out in droves, whereas supporters of the other parties were either complacent or lacked enthusiasm.

The most successful minor party in the lower house is the Bloc Québécois, which gained 10 seats. The Greens have secured just the one. Both may do better in the Senate, as may some independents.

More analysis will no doubt be forthcoming in the days and weeks ahead. After a glass or two of Sapling Sparkling Maple bubbly.

With Abbott gone, Canada must now dump Harper. This will change the world. Please read, like & tweet https://t.co/hWdtRLNhSd @IndependentAus

So who is Justin Trudeau? All you need to know about Canada's new prime minister https://t.co/izzVlYuPBW pic.twitter.com/IiDMZDSdZu