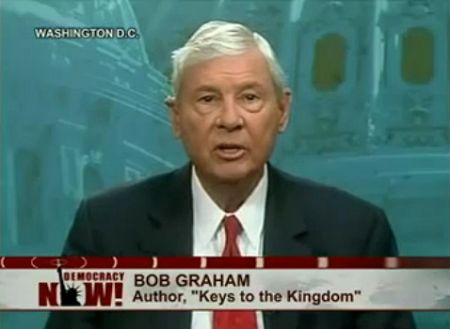 New evidence emerges of prominent Saudis aiding the 9/11 attacks and of a US bush Administration cover-up. Juan Gonzalez and Amy Goodman from Democracy Now! report.

Former Florida governor and senator Bob Graham is calling on President Obama to reopen the investigation into the Sept. 11 attacks after new information has emerged about the possible role of prominent Saudis in the 9/11 plot.

According to recent news reports, a wealthy young Saudi couple fled their home in a gated community in Sarasota, Florida, just a week or so before Sept. 11, 2001, leaving behind three cars and nearly all of their possessions.

The FBI was tipped off about the couple but never passed the information on to the 9/11 Commission investigating the attacks, even though phone records showed the couple had ties to Mohamed Atta and at least 10 other al-Qaeda suspects.

Graham joins us to discuss the news he’s called "the most important thing about 9/11 to surface in the last seven or eight years."

As the former chair of the Senate Select Committee on Intelligence, a post he held on September 11, 2001, Graham chaired the Congressional Joint Inquiry into the attacks. He’s just written a novel called "Keys to the Kingdom,” which follows a fictitious former senator and co-chair of the 9/11 congressional inquiry who is murdered near his Florida home after he uncovers an international conspiracy linking the Saudi Kingdom to Osama bin Laden and al-Qaeda.

Graham says he chose to write the novel after his 2000 non-fiction book, "Intelligence Matters," was heavily censored.


(This story was published in Truthout on Thursday September 15,2011 and has been republished under a Creative Commons licence. Visit Democracy Now! for the full interview with Bob Graham and  transcript.)