AS A POLITICAL enthusiast, I feel I have completed a timely achievement in reading ‘Ashbygate’, written by Ross Jones, published independently by Independent Australia and released recently. It is timely because many of the main players in the drama, namely Peter Slipper, James Ashby and Mal Brough are back in the headlines for the events that became known as “Ashbygate”.

We read about his flaws, his fetishes and some could say his foolishness. Despite these character traits, we see a man who people either seemed to love or hate and a man who could be a loving husband and trusting friend.

We also come to see that despite our personal responses to his actions, he was not afforded an equitable treatment by our federal parliamentary, law enforcement or justice systems when compared to many documented central political figures. The so-called Minchin Protocol has been shown to be unfairly selective in its application and not open to him for what equated to be a modest amount in comparison to others (looking at you Tony Abbott and Barnaby Joyce to name but two). 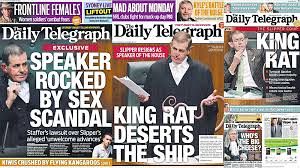 Jones does not spare the sequential detail of the events and lends authenticity to the retelling by using the direct language of the main protagonists in conversations held via SMS or emails. He helps the reader differentiate the participants in the conversations by using different font styles.

Although Jones is meticulous in breaking up the dialogue this way, it takes sustained concentration to remember which political player or staffer is speaking. In later passages, where dialogues are broken up and identified with the name or initials of whoever is speaking, it makes for more fluent and confident reading of the dense information.

Because there are numerous Liberal and/or LNP party members and their circumstances involved in the build up to the event, its unfolding and then the consequences, becoming familiar with the political manoeuvres and deal-making is complex and takes a concentrated effort which, as the reader, I strived to achieve because to me it was not just a story but a political and historical study. Gentle periodic reminders of certain participants were appreciated if and when they were offered.

I entered into the challenge of reading ‘Ashbygate’ to become better acquainted with the mindsets of those who live and breathe the Liberal ideology, or the combined cultures of the Liberal National Coalition. That was a brave or crazy act on my part because usually I take the challenge of a book assuming I will like the protagonists.

However, despite my assumptions about political cut-throats and nepotism being proven, I was somewhat surprised that I experienced some roller-coasting of emotions when it came to key players. This just goes to show that we are all complex characters. However, without spoiling it for other potential readers, I remain cynical about one very key person who today comes into the spotlight, as more people come forward to question his integrity.

What Jones does well in ‘Ashbygate’ is depict Slipper’s downfall through the cruel and malicious payback of the Liberal Party faithful only too happy to assist the rise of a ruthless, scheming and self-centred Brough. Recent history has shown us that Brough’s modus operandi of despatching Slipper out of his seat of Fisher in Queensland so that he could have it, has paid off for him.

However, reading this book reinforces the need to read history because knowing our history helps us to understand our present and that certainly is the case with current developments with the AFP revisiting James Ashby and Mal Brough for information on the events that led to ‘Ashbygate’.

Jones has done well to inform the reader and to remind us that our knowledge empowers us to judge more accurately the quality of our political leadership, the political party choices we have and what standards we expect of them and their political functionaries. When it is known there are sufficient informed voters in the community who are scrutinising the actions of the parliamentary system, it makes other branches of our democratic system more alert to community expectations of effective governance in the three arms of government: the parliament, the judiciary and the executive.

This is where the recent re-visits of the AFP on James Ashby and Mal Brough are indictments of the power of heightened community awareness and expectation of law enforcement to keep everybody accountable under the law despite their status.

This is why Ross Jones and Independent Australia are to be congratulated for beating the drum of grassroots people’s questions raised of a system that can be too easily manipulated by unconscionable political players that put their own interests above democracy and justice.

The book ASHBYGATE – published by Independent Australia, 2015 – will be officially launched at 10.30 am, 10 December 2015 at the Shearwater Resort, 79 Edmund Street, Caloundra. All are welcome. Refreshments will be served.

Read the book Steph #auspol Turnbull deflects questions on whether Brough should stand aside https://t.co/BErmeiPJVR via @ABCNews