Blacktown mayor Len Robinson is a strata manager by trade and so it is noticeable that local land is being resumed at a skyrocketing rate to build high rise apartments. Peter Wicks reports.

A few weeks ago, I wrote an article after attending a protest outside Blacktown council.

Residents were furious at council plans to kick them out of their homes, take their land and homes by compulsory acquisition and leave them out on the street. That way, the council could put up high-rise apartments and make a tidy profit.

Also questionable is Liberal Mayor Len Robinson, who has been pushing this sudden rush to up the ante on high-rise apartment development. Len Robinson’s business arrangements are quite hard to track down, as he seems to have been involved in several companies, all of which involved Strata Management. As a result, I have referred this matter to ICAC in the hope that they may be able to get the straight answers residents haven't yet received as to his business practices since being on council.

At long last, however there is some good news from the council regarding this action.

The Liberal Councillors, including Federal candidate Isabelle White and Jess Diaz – the father of Federal candidate Jaymze Diaz – have heard the cries of the residents, listened to the pleas of the community, and acted in a manner they deemed appropriate.

The bad news is they have now decided to take the local Aquatic Centre as well. Just for good measure.

The Blacktown Aquatic Centre sits on a huge area of land right alongside the houses that council wants to take from residents. That seems like a massive coincidence to me.

This is prime land, right alongside the railway, giving easy access to transport; and already, as you can see from the below photo, the high-rise apartment blocks are just around the corner.

The council is stating that there are repairs that need to be done at the centre due to land movement that requires ongoing maintenance. This is something that has not been noticed before, or needed maintenance previously, but apparently it has reared its ugly head just as council are acquiring the land and houses around it. Hmmm...

The cost of this mysteriously sudden maintenance is, apparently, $21 million.

The mayor and his motley crew of Liberal councillors insist that the best option would be to take the pool and build a new one somewhere else at a cost of $27 million.

To me that sounds like making the Council $6 million worse off, but that's just my calculator.

However, my gut tells me that the current pool may be taken but a million and one excuses will suddenly emerge for the new one not being built. Some of these excuses are emerging already.

The excuse I am about to tell you about is classic Liberal logic at it's very best, and gives an insight as to why only a desperate party would put the likes of White and Diaz forward as candidates for anything.

Just a few kilometres up the road from the pool there is a Wet'n'Wild Theme park under construction. Those who have been to one of these theme parks will know what to expect — wave pools, water slides, expensive food, and sunburnt kids.

Lord Len Robinson and his court of Coalition clowns are saying that with Wet'n'Wild opening up, the Blacktown Aquatic Centre will not be able to compete.

I'm assuming they believe families will be happier to pay $49 per head for a quick dip at Wet'n'Wild rather than $4.90 at the Aquatic Centre.

I'm also assuming they seriously think that those who go here for training purposes – as Ian Thorpe has in the past – will be content to do laps in the landing pool at the bottom of the slides ... two strokes, turn, two more strokes, turn again, all while dodging the bodies of children hurtling at them at 100 miles an hour.

Maybe they're right; it could be the best way for toddlers to learn how to swim. Throw them down a tube so they land head first in a shallow pool all dizzy and unsure which way is up or down.

Great thinking Mayor Robinson; I hope you didn't become mayor by being the smartest Liberal option.

Last year, there were 284 drowning deaths in Australia and the backyard pool remains an all too common killer for children under four — but that doesn't matter to the Blacktown Liberals, who are intent on turning the place where toddlers learn to swim into high-rise apartments.

Local schools will also be happy as they now have to find somewhere with an Olympic pool to hold swimming carnivals. Stanhope Gardens is probably the closest, however it is overcrowded already, is only half-size and is not convenient for those requiring public transport.

Schools will now, most likely, look to using the Mt Druitt pool, as it is the closest Olympic-sized pool.

Unfortunately for those schools, Len Robinson and his fellow Liberal councillors have already gotten there first. A motion was passed by the councillors to sell off the Mt Druitt pool for development recently.

The Aquatic Centre also has a unique history.

It is home to a war memorial — in fact, the pool was named the “War Memorial Pool” at one stage. Still, we know veterans are not high on the respect chart for Mayor Len, as he sent his councillor Isabelle White to the ANZAC Memorial at Rooty Hill to represent council, rather than the only Veteran on Council Charlie Lowles, who had been representing council at the service as a councillor and a veteran for close to a quarter of a century.


It is also the place where Kieran Perkins broke the 800m Freestyle World Record in 1992. It was also a training centre for our Olympic athletes during the Sydney 2000 Olympic Games. But hey, I guess the Liberals don’t think swimming is an important sport to Australians?

With Blacktown Aquatic Centre up for grabs for development and the adjoining streets having houses up for compulsory acquisition by the council, the area is turning into a strata manager’s wet dream.

Lucky for Mayor Len Robinson – even prior to his current stint as mayor – that is his field of work and how he made his living.

Unfortunately for Len Robinson, those in the area won’t let him get away with this without putting up a solid fight. Local members such as Nathan Rees, Michelle Rowland, and Opposition leader John Robertson have vowed to fight this disgraceful plan by a new Liberal council who seem to be using both residential streets and public facilities as something they can take away and use to promote their own interests and agenda’s.

It is not only the Federal and state MP’s that are taking this matter on, it is also the youth in the area.

Local Youth Member for Toongabbie Jay Clarke has started an online petition to save the pool, and also has a hard copy version that is doing the rounds and gaining the support of local schools. Please find a link to the petition below if you wish to sign it: 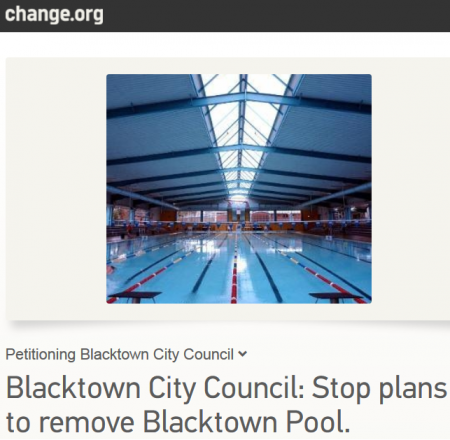 Let’s hope this decision to attempt to take away a public facility with absolutely no public consultation, and absolutely no consideration for anything other than local developers and a few people's hip pockets lands these councillors where they belong.

In the deep end.