Being consistent with God

Conservative Australian politicians who have begun citing Judeo-Christian ‘values’ are simply using this as cover to support their own prejudices, says Scott Crawford. 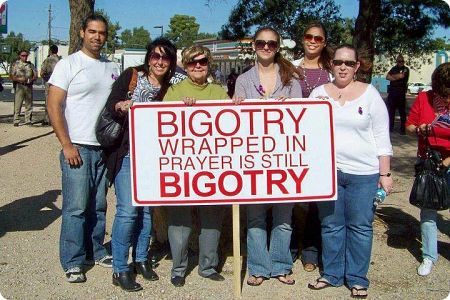 AUSTRALIA IS A DIVERSE PLACE and proudly secular to boot.

As such, religious debate in Australian politics has historically been taboo. You can’t debate religion, because faith is essentially irrational. Of late, however, some Australian politicians have begun frequently citing Judeo-Christian ‘values’ in their public discourse. In this environment, our secular political culture is seemingly under threat by undercurrents of American-styled religious dogma.

The issue of gay marriage provides a good example.

By invoking Judeo-Christian ‘values’, some politicians argue that marriage is exclusively a union between a man and a woman. The Bible says so, they say, end of the argument. But by following this logic, Judeo-Christian ‘values’ must also infer that marriage is a union under God and officiated by a person who is holy. I was married by a civil celebrant under a tree at an art gallery. According to these same Judeo-Christian values, should I be allowed to marry? If not, where are the politicians advocating for the annulment of my marriage and the millions like mine?

The Church is unfashionable, and Christianity is increasingly stigmatised amongst progressive elites and many on the left of politics. In addition, the many horrific cases of sexual misconduct by Catholic priests has meant that the focus of news reporting on Chistianity in recent times has typically been decidedly negative

In spite of this, Christian values are undoubtedly a source of much good. The born-again-atheist Ayaan Hirsi Ali even radically suggests that Christian leaders should be doing more to champion their cause, because she views their values as preferable to others.

We often forget the good that religious institutions can do. Christian homeless shelters, drug rehabilitation centres, international aid organisations and welfare services do unimaginable good in our society and around the world. Don’t get me wrong, it infuriates me when clergy demonise the use of condoms in Africa but, paradoxically, these same people also demonstrate selflessness, compassion and unbounded love by nursing and caring for people suffering with HIV/AIDS. While this is paradoxical to outsiders, it remains consistent with their beliefs.

It is often suggested that there is an uneasy alliance within the ALP between socially conservative Christians and the Party’s more progressive elements. When it comes to the religious politicians on the left, however, at least they seem coherent. My issue isn’t about religion influencing political thought, it’s about the consistency and/or hypocrisy in doing so.

For example, some politicians do not support legalised abortion because of their faith. But, then, why do many of the conservative pro-lifers also favour cutting welfare payments and social services, including those that assist single mothers and less well-off families? If one values life, why did the same conservatives drag their heels on resolving the recent impasse on refugee processing? What do Judeo-Christian ‘values’ say about letting people drown, while you sit idly and watch?

It’s been a while since I’ve been to Church, but I still remember a particular hymn: ‘Jesus held hands with the lepers’. If politicians are to decide policy on the basis of ‘what would Jesus do?’, then let’s not narrow them to a few social issues. If conservatives are to invoke Judeo-Christian ‘values’, they should do so consistently across the spectrum of policy issues. Let them debate funding for the homeless, the sick, the aged, the disabled, the poor and the dispossessed in accordance with their ‘values’.

Could the compassionate conservatives please stand up?

Alternatively, could they stop hiding behind their purported ‘values’. At least then we can get back to debating the issues, and not selective faux-religious dogmas.