Comments made in the national counter-terrorism debate last week by the author initiated a firestorm of debate. One prime question asked of the author by national media was what exactly would this counter-terrorism force would look like and how it would operate. This article is meant to answer those questions definitively in a suitable forum.

WHAT THE AUTHOR TERMED in media comments a Counter-Terrorism Group would possess a Federal mandate to command counter-terrorism operations and responses nationwide. The group would have three operational levels. The first sees ASIO agents, professional spies, covertly “orbit” individuals that make it onto the terror watchlist. They would be heavily-armed agents tasked with physical surveillance of the target primarily but with the power, training and equipment to interdict their target to prevent or stall an attack in emergency scenarios.

The next two levels of operational coverage would involve a dedicated counter-terrorism agency. Teams of 2-4 tactical members would use co-ordinated patrol patterns throughout major population centres as to maintain a sub-two minute response time to anywhere in the city margins. The third tier would be tasked to tactically respond to large-scale attacks with Hostage Rescue Teams and secure the CBD of the assigned city, wearing de-militarised uniforms like the UK Counter-Terrorism Specialist Firearms Officers. The force would position units in every capital city plus Townsville.

In terms of personnel, if done on the cheap with single-agent deployments, it would require at minimum one ASIO agent per watchlist target sharing eight-hour shifts daily. 3:1 on the current watch list equates to approximately 3,000 agents. These agents would operate in undercover civilian garb but store assault rifles, flash-bangs, tasers and body armour in their vehicles for immediate intervention or blocking manoeuvres. The single agents would coalesce into orbiting teams where cells are involved to maintain a minimum 1:1 ratio of agent to suspected terrorist. These agents would be assigned one individual only at a time and get to know them intimately — think the opposite of a bodyguard. Delving into more operational detail is dangerous in a public forum.

In the event of a large-scale hostage taking, gun battles, suicide bombings and so on by flash mob terrorism or previously unknown lone wolves or cells, Hostage Rescue Teams would deploy from helicopters, 24/7 patrolling vehicles (including motorbikes) and/or covert pre-positioned operating bases in the heart of our major cities. Some 50 members per HRT per city seems advisable, while another 50 members would patrol the city in the same manner as the CTSFO patrols London in small units already wearing full tactical gear. The teams would also enjoy access to one UAV, which it would share with ASIO, in each city. Nine small “little bird” helicopters, nine UAVs and 900 personnel would then require a force of some 1,500 members including support staff. No bigger than ASIO now.

The mud map below demonstrates the rough schema. In red is the Hostage Rescue Team stationed at the largest population concentration (with helicopter), blue circles represent the tactical patrol teams of 2-3 operators with perhaps 5km radius patrol zones. In purple are the single agent watch list trackers from ASIO. From this, it starts to become apparent the full-spectrum coverage of the plan in the most likely target cities. 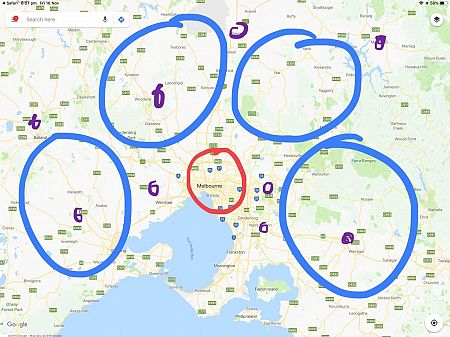 The seamless communication between orbiting agents and both small patrolling and large response teams would assure rapid coalescence in the event of attacks. Outside of hostage-taking events, orbiting agents would not typically wait for back-up to respond even if outnumbered or outgunned, doing their best to impede underway attacks no less than those valiant street cops at Bourke Street.

In terms of budget, unfortunately it’s probably going to be cut from Defence. Funding for the tactical response wing would be simply transferred from ADF Tactical Assault Groups. If more funding is needed, cutting the almost-never deployed 30,000 Army Reserves from the force for 5,000 permanently operational internal paramilitary agents is an easy and justifiable trade. Thus, if funding was redirected from Defence the only excess budget demands would be that which ASIO has claimed necessary, dubious as it is in claiming it needs 1 billion dollars (still only 2.5% of the ADF yearly budget) to surveil likely internal enemy combatants with 7,000 more agents to essentially track cell phone locations, record phone calls and run keyword search software. But let this be said — if someone makes a terrorist watch list, Australia expects that individual watched.

If, as hoped, that ASIO dollar number includes the numbers of additional agents needed for physical tracking of watch list targets, then that would only need to be allocated from either the ASIO or CTG budgets. One or the other agency would run the orbiters, but whoever did so must ensure the surveillance element was armed. CTG orbiters would, however, gather intelligence secondarily; their prime function would be rapid intervention, by maintaining a two-minute response time via a positional radius of five kilometres from the target at all times (if, for instance, the target were to break pattern and head toward the CBD of Brisbane, agents would tighten the response time to 30 seconds).

This plan is most assuredly not designed for the borderline mentally impaired terrorists we have been lucky, in a way, to have engaged thus far — it is for the “big day out”, the network with the dirty bomb, weaponised anthrax or sarin nerve gas. It’s happened before. It will happen again and it can happen here. Another 7,000 agents up from its pitiful 2,000 agents and 1 billion dollars a year would equal 2.5% of the Defence budget. Plus another 1 billion per year for a force of 1,000 tactical agents plus training facilities and resources (vehicles, boats and helicopters) – the figure to optimally secure the Government’s number one responsibility, the homefront – comes out at 5% of the cost of the external security portfolio (Defence budget).

ASIO has already warned it remains underfunded and can’t guarantee domestic security. It also detailed how its remit has extended for some reason to criminal activities inside Australia. ASIO needs to concentrate on espionage and terrorism and leave law enforcement to the Australian Federal and State Police. The CTG is also needed so law enforcement discontinues confusing soft policing with war-fighting terrorism, trying to do both mentally and operationally at the same time. The mission creep and schizophrenic overlap of security responsibilities is crippling mission efficacy. The Government also just infused almost half-a-billion dollars into ASIO and ASIS to fight terrorism, so the money is there.

The why is the easy part — because modern counter-terrorism is beyond policing forces while deploying the military at home is strategically self-defeating and a betrayal of our core values based on the civil-military divide (see the Federal Government's mission creep by assigning a Line General to head up National Drought Relief operations). Troops on the streets simply reward contemporary terrorism by literally bringing the war home. Essentially a strategic own goal for naught but tactical and budgetary expediency (military call-out powers which have already experienced a mission creep to encompass shoot-to-kill powers in civil unrest contingencies).

Dr Allan Orr is an international security specialist whose publications revolve around the topics of terrorism and insurgency.

Ways to improve our response to bush fires

26 October 2019, 11:00am The Australian Government needs to figure out its priorities in deciding on a firm ...

22 November 2018, 11:00am Dr Allan Orr explains his idea for a counter-terrorism unit, following comments ...
Join the conversation
comments powered by Disqus
Daily news
Get FREE daily updates from IA to your inbox.
Just in
SHOP AT IA