Ross Jones reports from the first day of the Ashby/Harmer leave to appeal case against Rares’ Slipper verdict, held yesterday in the Federal Court in Sydney.

Joan Evatt was there of course, as was David Marr in his first day with the Guardian. All we needed was the knitting.

As a crowd pleaser, Lee is a disappointment. Coiffed as he may be, we’re talking monotone delivery; coiffed 1, cadence nil.

I’m not a lawyer, but … (insert joke), so an awful lot of what went on completely escaped me. Add Lee’s somnambulant address, constant accessing of folders and tab numbers, cross references and general court niceties and if, like me, you are affected my mature onset ADD, then it’s pretty easy to miss the odd nuance. 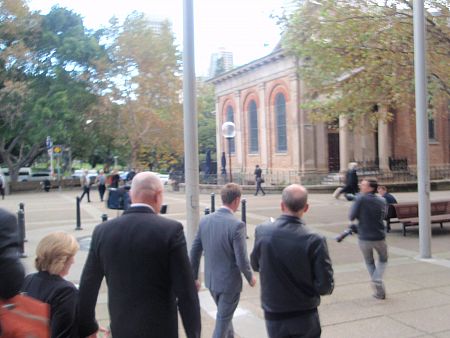 But the gist is this.

Lee took up the morning, Pritchard the afternoon. Each argued for their respective clients, but gave the gallery the impression they more than were happy to help each other out with a bit of free advice from time to time.

As much as I understood it, Lees argued the sworn Ashby affidavit should have been accorded more evidentiary weight. He also argued there was no way Mr Ashby could have had any political motivation because, at the time of the allegations, Jim had resigned from the LNP and that he had no political or financial interest.

Similarly, as I understand it, Pritchard argued Michael Harmer had included the original, and now dropped, cabcharge allegations because, at the time, he believed them to be true. He alleged Mr Harmer had never spoken to or met Mal Brough, had never had LNP affiliations and, in fact, batted for the left.

Believe it or not. 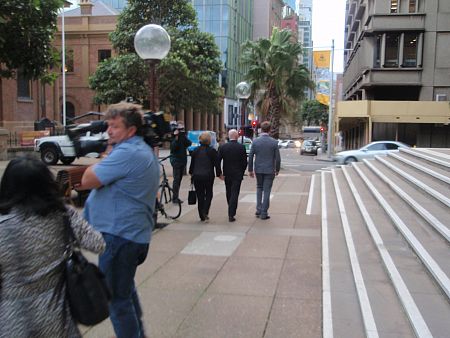 (Editor's note: Friday, 3 May 2013; noon: In an earlier version of this article, we incorrectly stated Peter Slipper's lawyer was Peter Russo. This has now been corrected in the piece. We apologise for this error.)

The trials and tribulations of James Ashby

8 February 2013, 5:36pm Ross Jones was at court for the next round of the Slipper vs Ashby case — and he ...
Join the conversation
comments powered by Disqus
News updates