The Ashbygate Trust provides an update as well as looks at the role of LNP barrister David Russell in the plot against Peter Slipper.

SPRING is in the air.

The Federal Court’s decision on Ashby and Harmer’s leave to appeal hangs over the players like the Sword of Damocles. Best of all, Clive is suing Mal.

The question, Your Honour, is: did Mal, or did Mal not, beg Clive for the funds to cover Ashby’s legal costs? Providing Clive doesn’t bottle it and withdraw his writ against Brough for calling him a liar, one man will emerge as just that.

A couple of days before this date ‒ on 29 March 2012 ‒ Mal picked up the phone and called David Russell QC, LNP heavy, CV the size of an airport novel, HR Nicholls member, heir to a pastoral enterprise, RAAF Reserve. Ultimately, sadly, a tax lawyer.

Ashbygate followers will recognise 29 March 2012 as the date James met with LNP worker Val Bradford and ‘broke’ the news of his alleged harassment; the date Mal texted ‘can that be emailed James, it is hard to read’; the day James and Karen expressed such excitement about meeting ‘Jackie’.

In this first call, Mal asked David to advise James. David apparently mulled over the pro and cons of doing so, including, on 30 March 2012, speaking with barrister Rachel Francois, who had been briefed by Harmers in the Fraser-Kirk/DJ’s matter.

Then, according to his affidavit to the Federal Court dated 23 July 2012:

‘On or about the Thursday before Easter (5 April 2012), I received a further telephone call from Mr Brough and we arranged a conference for me to see Mr Ashby at my home on the Sunshine Coast at 9.30am on Good Friday.'

On the evening of 5 April, James texted co-conspirator Doane the rendezvous address:

So, we have a meeting between a right–wing tax lawyer and three opportunists in a Sunshine Coast holiday apartment. What could possibly go wrong?

It didn’t start well for Doane:

According to Russell’s affidavit at the Ashby Slipper trial:

In fairness to Doane, it must have been tricky because there is no apartment 29 at Northwind. Title searches show only apartments 1-28 and 30&31. So the Trust took a trip to the Northwind and spoke with the concierge, who said the building had been renovated and, during this process, apartment 29 disappeared and became apartment 31. Don’t ask us how that works.

Apartment 31 is owned by Wyree Investments Pty Ltd, a company owned by David and his son. So it’s sort of a home, except David lives in a rather nice Brisbane riverfront location. David advised the Ashbygate Trust he had lived at the apartment in 2011, so it passed muster as ‘my Sunshine Coast home’. We’d call it an investment/bolthole, but fair enough.

After the meeting got going, according to Russell: 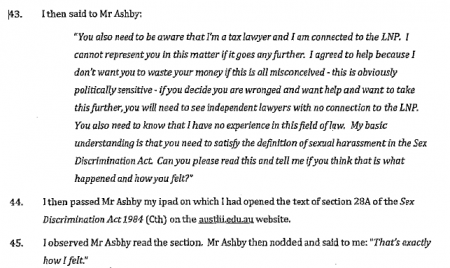 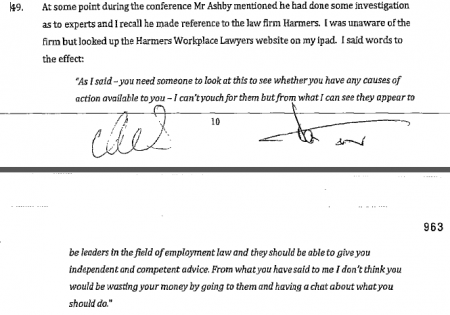 As Vince O’Grady on IA has pointed out previously, it beggers belief that Russell was unaware of Harmers. After receiving the first call from Mal, he consulted with a barrister ‒ a barrister with rooms on the same Wentworth Chambers floor; a person he saw in his daily life; a person who had been front and centre of a major Sydney sex case working for Harmers.

David is no dill. But he does sometimes display scant regard for money.

David gives Mal 100% credit for initiating the Good Friday meeting. His affidavit makes no reference to Jacki(e), to wit

If this is not you, Jackie Kelly, quintessential Howard battler, please contact our office at your earliest convenience.

‘Yet there is someone else whose role in conceiving of the new party should also be acknowledged: my colleague David Russell QC, for whom the fusion of the Liberal and National parties in Queensland, to create what we might describe as ‘Liberalism with Queensland characteristics’, has been a life-work’.
~ George BrandisSC

Catch up on IA's full Ashbygate investigation here. Find out more about the Ashbygate Trust here.