The war in Syria continues, with fragmented and extreme opposition fighting to topple the barbaric Assad Government, writes Yanis Iqbal.

THE HOUSE Foreign Affairs Subcommittee on the Middle East, North Africa and Global Counterterrorism held a hearing on 15 April 2021, on '10 Years of War: Examining the Ongoing Conflict in Syria'. As is customary of American exceptionalism, the feasibility of regime change in Damascus was not left undiscussed.

Congressman Joe Wilson of South Carolina, who is the top Republican on the Subcommittee, explicitly called for President Bashar al-Assad’s ouster.

“The Assad regime is illegitimate and should be replaced.”

Omar Alshogre, Director for Detainee Affairs at the Syrian Emergency Task Force, also remained uncompromising in his insistence on the overthrow of the Government, saying the 2011 uprising in Syria was inspired by U.S.’ “democratic” tradition.

Continued talk about regime change in Syria is unmoored from reality. Those begging the U.S. to overthrow the Assad regime with guns and bombs fail to see how the involvement of external powers has led to sheer devastation. Far from being “democratic”, the U.S. has been fuelling a viciously sectarian civil war in Syria.

While initial periods of the 2011 uprising expressed the discontent of the Syrian people against Assad’s neoliberal authoritarianism, Euro-American interventionism soon gave a sectarian character to the rebellion.

The Syrian Muslim Brotherhood, a Sunni Islamist organization, played a lead role in the revolt from the very first moment, dominating the Syrian National Council (SNC), formed in early October 2011, which the U.S. and its Western allies immediately apotheo­sised as 'the leading interlocutor of the opposition with the international community'.

The SNC, pro­claimed the West, would be:

'A legitimate representative of all Syrians.'

The Free Syrian Army (FSA) was the SNC’s military wing.

Syria’s Muslim Brotherhood was funded in part by Saudi Arabia and Qatar, this money being used, as then SNC President Burhan Ghalioun said, “to help equip the Free Syrian Army".

Molham al-Drobi, a senior council member and a representative of the Syrian Muslim Brotherhood on the Council, stated that Saudi Arabia, Qatar, Kuwait and the United Arab Emirates (UAE) were funding the council to the tune of $40 million per month.

Weren’t all of these states presided over by princes, emirs and kings, who preferred to govern by decree, eschewing any form of democratic participation?

While the Gulf Arab monarchies funded the rebels of Syria to overthrow Assad’s dictatorship, Washington muttered not a word of criticism against them.

Then-President Barack Obama and his Secretary of State, Hillary Clinton, said they want a democracy in Syria. But Qatar, Kuwait and UAE are autocracies and Saudi Arabia is among the most pernicious dictatorships in the Arab world. Rulers of these states inherit power from their families, just as Assad has done. And Saudi Arabia is an ally of the Salafist-Wahhabi rebels in Syria, just as it was the most fervent supporter of the medieval Taliban during Afghanistan’s dark ages.

The Saudis are repressing their own Shia minority just as they now wish to destroy the Alawite-Shia minority of Syria. And we were made to believe Saudi Arabia wants to set up a democracy in Syria?

The FSA, touted as “moderate rebels” by the West, was inevitably going to be sectarian insofar it was dominated by Muslim Brotherhood and funded by Sunni monarchies. It had virtually no representation among the roughly 30 per cent of Syria’s population that wasn’t Sunni.

Most FSA brigades used religious rhetoric and were named after heroic figures or events in Sunni Islamic history. Many of the par­ticipating groups had strong Islamist agendas and some groups had similar ideologies as other jihadi groups, following the strict Salafist interpretation of Islam.

Among the FSA’s Islamist members was the Muslim Brotherhood itself, which existed “on the ground” working 'under the FSA umbrella'. One of the Brotherhood-affiliated guerilla groups was the Tawheed Division, which led the fight against the Syrian Government in Aleppo.

“Those whose intentions are not for God, they had better stay home, whereas if your intention is for God, then you go for jihad and you gain an afterlife and heaven.”

This was hardly the exhortation of a secularist.

As Western powers provided arms to the supposedly moderate opposition, a striking development occurred. The opposition to Assad became a fragmented movement dominated by the Islamic State of Iraq and Syria (ISIS), the Al-Qa’ida franchise Jabhat al-Nusra and the Islamic Front, consisting of six or seven large rebel military formations numbering an estimated 50,000 fighters, whose uniting factor was Saudi money and an extreme Sunni ideology similar to Saudi Arabia’s version of Islam.

The Saudis saw the Islamic Front as capable of fighting pro-Assad forces as well as ISIS. But Riyadh’s objections to the latter appeared to be based on its independence of Saudi control rather than revulsion at its record of slaughtering Shia, Alawi, Christians, Armenians, Kurds or any dissenting Sunni.

The “moderate” rebels were completely marginalised. Their plan since 2011 had been to force a full-scale Western military intervention as in Libya in 2011 and, when this did not happen, they lacked an alternative strategy. The U.S., Britain and France did not have many options left except to try to control the jihadi Frankenstein’s monster that they helped create in Syria.

At other times, they repackaged some rebel warlords, thinking they would be considered “moderates” simply because they were backed by the West and its regional allies.

In February 2021, the U.S. government media organisation the Public Broadcasting Service (PBS) conducted an interview with Abu Mohammad al-Jolani, the head of Hayat Tahrir al-Sham (HTS), the latest among the name-changing jihadis the mainstream press still refers to as Syria’s “moderate opposition”. PBS' exchange with Jolani is a piece of a documentary on Jolani that PBS’ Frontline program plans to air in the future.

The HTS was formed in 2017 out of the remaining jihadi groups that had gathered in Idlib in 2015. The main pillar of the HTS is the al-Qaeda branch in Syria, the Jabhat Fateh al-Sham and before that the Jabhat al-Nusra.

The other groups that joined the Jabhat Fateh al-Sham to create the HTS include the four main omnibus jihadi groups: the Jabhat Ansar al-Din, the Jaysh al-Sunna, the Liwa al-Haq and the Haraka Nour al-Din al-Zenki.

These are hardened groups of fighters, many of them coming in and out of each other’s platforms and even fighting each other viciously.

For the past several years, the HTS has tried to rebrand itself as “moderate”. In 2015, after it became the dominant force in Idlib, the outfit took on its new name and withdrew its pledge of allegiance to al-Qaeda. 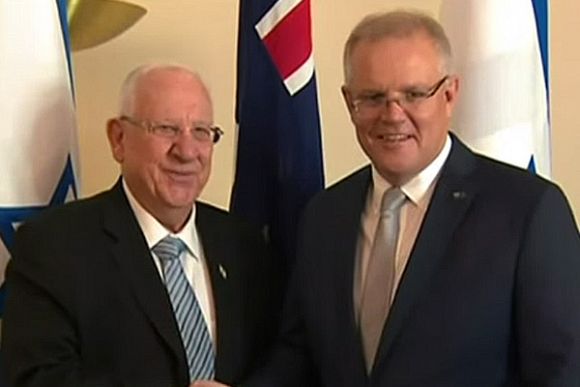 A parliamentary speech has drawn attention to the Morrison Government's willingness to turn its back on matters of international crime.

It claimed to be a Syrian nationalist force with an Islamic ideology. But this is merely a superficial change. It continues to propagate the view that the Syrian state must be based on Sharia law and the general orientation of the 100,000 to 200,000 “radical” fighters inside Idlib is towards al-Qaeda.

This is something that is accepted even by the U.S. Government, which has otherwise used these fighters in its geopolitical games against the Government in Damascus.

Jolani was once an Islamic State commander who went on to found Jabhat al-Nusra. The State Department declared Jolani a 'specially designated global terrorist' in 2013. This designation still stands. Jolani now runs what he calls a “salvation government” in Idlib, the remaining retreat of Islamist extremists in northwestern Syria.

He remains an Islamist theocrat determined to impose Sharia law on secular Syria, but he is committed to fighting Assad and so shares “common interests with the United States and the West”, as he puts it to PBS.

PBS’s attempt to legitimate Jolani was not a one-off. This was made clear on 7 April 2021, with the publication by the New York Times of an article by its Middle East correspondent Ben Hubbard based on an HTS-sponsored visit last month to Idlib.

'H.T.S. is not pushing for the immediate creation of an Islamic state and does not field morality police officers to enforce strict social codes.'

He failed to mention the numerous cases of torture, violence, sexual abuse, arbitrary arrests, disappearances and the rest of the inexcusable stuff these groups get up to.

Efforts to portray the Jolani and the HTS as the new representative of “moderate rebels” in Syria are another public relations ploy on the part of the U.S. to continue its war in Syria.

In an interview on 8 March 2021, James Jeffrey, who served as U.S. ambassador under both Republican and Democrat administrations and most recently as special representative for Syria during the Presidency of Donald Trump, has been quoted as saying that HTS has been “an asset” to America’s strategy in Idlib.

The U.S. will continue to support certain jihadi groups as long as the Assad Government remains in power.