The NSW anti-corruption body released its report into the NSW donations scandal this week and nowhere does it say Arthur Sinodinos has been exonerated, reports Ross Jones. 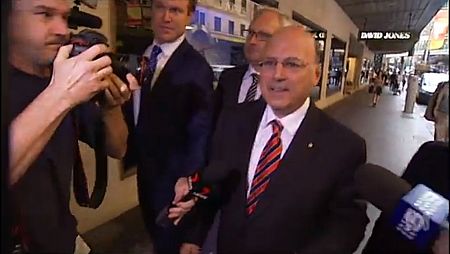 Sinodinos leaving ICAC, in which he recalled precisely nothing (Image via @johndory49)

THE ICAC REPORT into Operation Spicer has been handed down and Senator Arthur Sinodinos thinks he's in the clear.

A spokesman for Senator Sinodinos is reported as saying:

"The ICAC made no findings against Senator Sinodinos."

Which would be fine if the mud surrounding Arthur hadn’t piled up almost to his ears, so that, like an Easter Island statue, only his stony grey head remains above ground, blank eyes staring searchingly out to sea, hoping for a salvation miracle.

But unless ET comes to the rescue, Sydney Morning Herald cartoonist Moir’s brilliant little Arfur bomb is about to go off, the sparkle on its wick edging ever closer to the explosive within. Just a few mils to go.

The ICAC released its report into on Operation Spicer on 31 August. Nowhere in its conclusions does it say Artie is off the hook.

Arthur does get a few mentions in the Spicer report, however.

'Mr Sinodinos was the chair of the Finance Committee. He was actively involved in fundraising and, in this regard, had a fundraising role second only to Mr Nicolaou. Yet, both Ms Maclaren-Jones and Mr Sinodinos denied knowing that the Free Enterprise Foundation was a major donor.'

There is no hard evidence in the Spicer report that Arthur should go down; his tactic of zero memory in the ICAC hearings seems to have paid off. For now at least.

Still to come is the report of Operation Credo, where,

'The ICAC is investigating allegations that persons with an interest in Australian Water Holdings Pty Ltd (AWH) obtained a financial benefit through adversely affecting the official functions of Sydney Water Corporation (SWC) by: including expenses incurred in other business pursuits in claims made on SWC for work on the North West Growth Centre; drawing from funds allocated for other purposes; and preventing SWC from ascertaining the true financial position, including the level of the executives’ remuneration.'

Here is where Arthur’s problems really lie; his looming Guy Fawkes moment, if you will:

'The Commission is also investigating whether public officials and others were involved in the falsification of a cabinet minute relating to a public private partnership proposal made by AWH intended to mislead the NSW Government Budget Cabinet Committee and obtain a benefit for AWH, and other related matters.'

As we know, Artie was in AWH up to his now barely-visible neck.

Ironically, that neck has been spared to date by the Obeid Boys (AKA Dickheads With Attitude):

So it won't be until the DWA matter is resolved in the courts that we will read ICAC’s determinations regarding the legality of what Senator Arthur Sinodinos OA, was up to when he was on the brink of pulling a lazy $20 million from NSW taxpayers.

If his evidence given to ICAC is any guide, it’s not going to be good.

But if the Credo report is released before the next election and casts the Senator in a less than legal light, then the Government is in deep shit. Or out of office.

Amidst this turmoil, Arthur’s only choice is to stay stony and to maintain a sightless gaze into the unknown.

Ross Jones is the author of 'Ashbygate: The Plot to Destroy Australia's Speaker'. You may purchase his investigative exposé by clicking on the image below.