Community resistance from a small town has left the future of a large scale pipeline project in question, writes Johanna Evans.

THE AUSTRALIAN PIPELINE ASSOCIATION (APA) has appeared to shelve their proposal for the high-pressure Western Slopes CSG Pipeline ahead of their upcoming AGM to be held in Sydney on 25 October 2018. The 460km coal seam gas pipeline (also known as “the head of the snake”) will link the Santos Narrabri Gas Project (NGP) to the Moomba/Sydney bi-directional pipeline that takes gas to the Curtis Island LNG plant for export.

In a recent release on their website, APA states:

‘The NSW Department of Planning & Environment has recently requested further information from Santos to inform their assessment of the Environmental Impact Statement (EIS) for the NGP. APA has been informed by Santos that this request will result in some delays to the overall project schedule.’

It’s common knowledge that the proposed Santos gasfield in the Pilliga forest has no social licence and a recent survey shows that more than 50 per cent of residents surveyed in Narrabri are opposed. An analysis of local government areas surrounding the project shows the opposition is widespread. Could APA have been unaware that the NGP EIS had holes the size of the Guatemala City Sinkhole and the approvals process was not going to be a walk in the park for Santos?

Bullishly, APA chose to push their proposal ahead, not waiting to see if Santos got through their regulatory hurdles first. Poor judgement was seemingly apparent and this placed unwarranted stress on the community.

A GIPA lodged in early 2018 has revealed APA placed significant pressure on the NSW Department of Planning to provide the Authority to Survey document that would be used so that APA could conduct winter surveying regardless of landholder opposition to land access. What other pressures have been placed on the department? 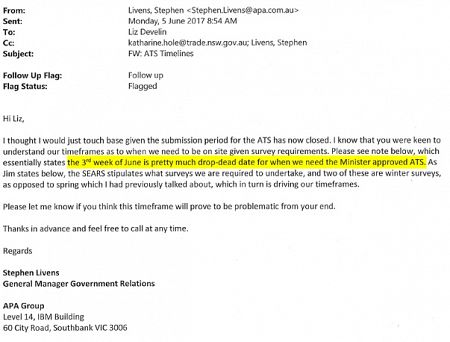 In November 2017, with a department approved ATS in hand, APA made their way on to land to conduct surveys for their Environmental Impact Assessment. They came into the Coonamble area with a team of ecologists, security guards and land access leads determined to get onto property any way they could, landing in helicopters and using unidentified contractors. 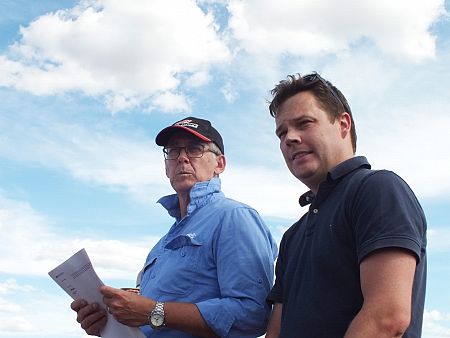 APA Land Access Tom Smith (left) and Jim Fjeldsoe present their Authority to Survey after accessing a Coonamble property without permission — this is a document comprehensively rejected by the community. (Image Johanna Evans)

Coonamble did not benefit from the APA presence during the survey period, missing out on much-needed dollars that would have benefited the local economy. Instead, they chose to stay in Warren and Dubbo, flying in and flying out, travelling in a convoy of white utes. The local constabulary was placed in a very difficult position with APA spending hours in the local cop shop trying to obtain entry to properties with a police escort and presenting the ATS as some kind of “court order”. APA has since denied any mention of a court order.

This placed enormous stress on the Coonamble and wider community who were forced to respond and stand up for their rights or face having a high-pressure coal seam gas pipeline go over their farming country, through sensitive ecological and culturally significant areas.

The company acted predictably when they were faced with staunch landholder opposition that refused to allow them easy access. They claimed that they were being bullied and harassed when, in fact, the opposite was true. APA proceeded to leave meetings through back doors and ask for police escorts. 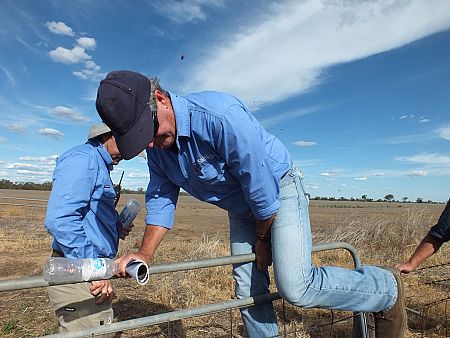 Here is APA’s heavily redacted account of what occurred on 20 November 2017. There are pages of redaction. What did APA tell NSW Planning? Was it the truth? Why did APA not want the public to see the feedback they gave to the department? 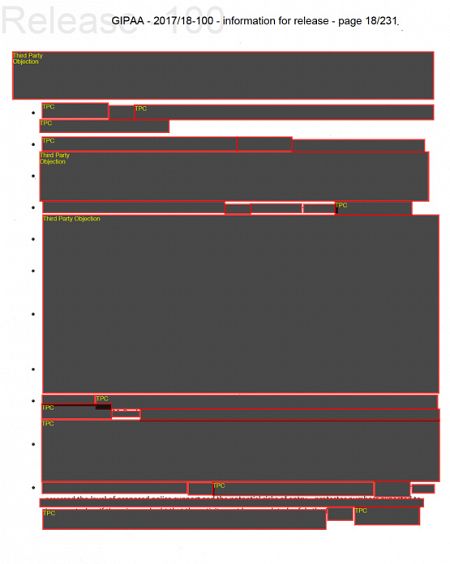 When the community challenged the validity of the ATS, APA asked the Department of Planning to publish a clarification of the ATS terms. The Department did as APA asked but the link to this clarification has since been removed, further muddying any certainty that the ATS was actually a legal document. The resources website has been migrated but the above document cannot be found on the new site.

The steamrolling of communities is wrong and places community members under enormous pressure, forcing them into roles they are unfamiliar with. Dr Methuen Morgan from the University of New England has studied in depth the stress faced by farming communities and you can listen to his talk at the CSG & Public Health Conference that took place in Narrabri, NSW, in August 2018.

“We examined the contribution of coal seam gas extraction to the global stress burden and the mental health of 378 Australian farmers, the farmers are currently being exposed to a unique range of vocational stressors and while mental health morbidity is similar to their non-rural counterparts suicide rates are, in fact, high.”

Resource companies would do well to review how they operate in regards to these findings. The impact of drought is significant on mental health, the added stress of dealing with resource and utility companies is not needed. They need to understand that no means no.

Don Mackenzie represents his community at the CCC and says:

“I, as a 67 year old farmer, had to learn a whole new skill set. Being a CCC member, I spent hundreds of hours trying to find different State legislation covering AS2554 pipeline as APA personal refused to give any explanation on the weight carrying capacity of the pipeline among other things.” 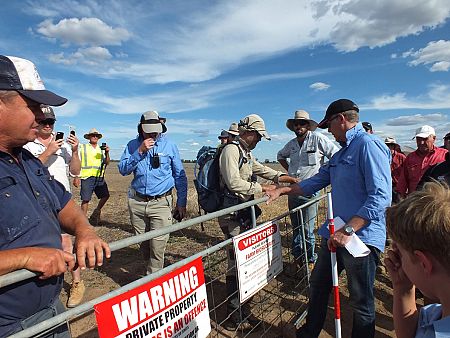 APA and contractors are photographed exiting private property over the top of No Trespassing and Farm Biosecurity signs. (Image Johanna Evans)

The financial cost to communities facing unwanted resource extraction is uncalculated. There are no figures, but we can safely say that hundreds of thousands of dollars that would have otherwise been spent within communities has been spent elsewhere on lawyers, donations to NGOs, travel, event attendance, signage and so forth in an attempt to stop the madness of fossil fuel extraction and its impact on our land, water and air. The sense of urgency communities feel is backed up by the latest IPCC report. The costs grow when considering land degradation, impact on water resources, air pollution, health and a myriad of other problems associated with extraction activities.

Galvanised by their experience with APA on the ground, on Wednesday 6 December 2017 at Coonamble Bowling Club, the “Coonamble Declaration” was voted on at a meeting that unanimously passed the following three powerful motions (see declaration image below). The declaration makes it clear to APA, Santos and the NSW Government that the NGP and the Western Slopes CSG Pipeline were just not going to happen. 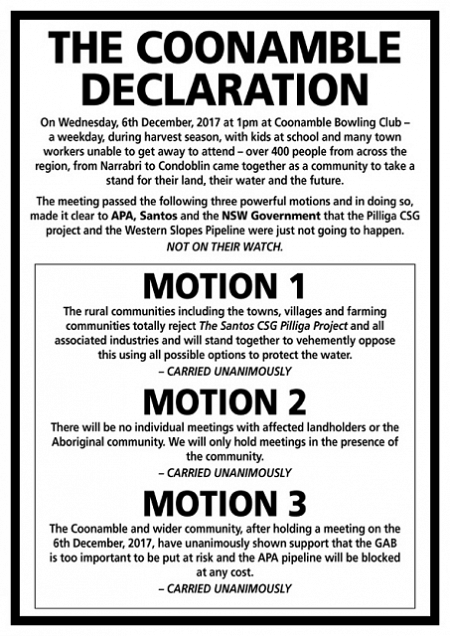 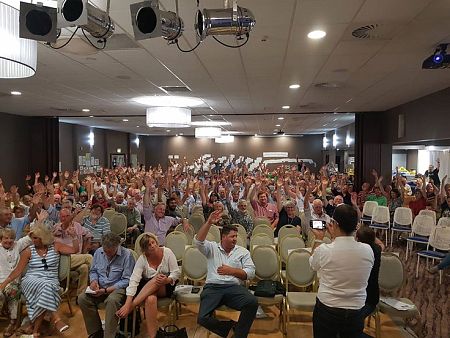 Image: Voting on “The Coonamble Declaration”.

At the same time, the GIPA reveals APA misrepresented the level of local opposition to the Government as coming from people outside of the area. This is deceptive? Any Coonamble local will tell you that the majority of people in the room were impacted/concerned people from the immediate area. 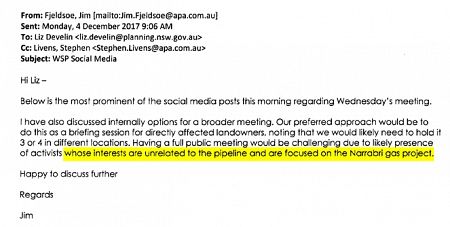 ‘APA has now completed the vast majority of field work required to inform the EIS for the project.’

However, this appears to be just fiction, as this APA document shows that 95km out of the 460km length were yet to be surveyed. APA was not able to access the Castlereagh or Macquarie River crossings and a resounding 79 per cent of landowners said no to voluntary access agreements. Locals say well over half the pipeline route has refused access. 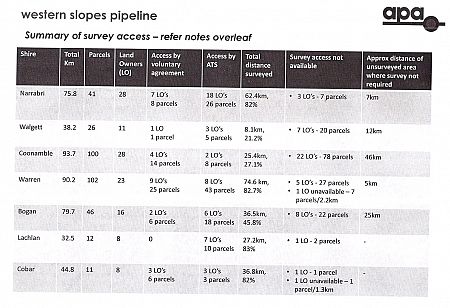 February 2018 saw APA attempt to host public meetings after refusing to attend ones that were community-led. The final meeting was held in Coonamble and, after a lengthy period of back-and-forth, with landholders firing questions that APA could not answer satisfactorily, the community arose en masse after a strong statement from David Chadwick, referring APA back the Coonamble Declaration, turned their backs and walked out.

The APA Coonamble meeting has finished with the community turning its back on CSG / pipeline proposal .
This Saturday the community is having its own meeting , 2.00 Bowlo ....Liverpool Plains people need to support this community
IF YOU CARE BE THERE
IF YOU DONT THEY WONT

In March 2018, farmers from the Coonamble area toured the Queensland gas fields to ground truth what APA was offering them.

“We visited someone who is currently receiving an APA gas pipeline at Reedy Creek to Wallumbilla. The price per kilometre offered for easement settlement is considerably more up there; $65,000 per kilometre. In Tottenham, APA is offering only $15,000 per kilometre, a huge discrepancy in compensation.”

In their October 2018 Update, the massive pipeline company cite:

‘APA’s view is that affected stakeholders are entitled to increased certainty regarding the progress of the NGP before the EIS for the WSP is submitted.’

So all the fuss and bother has been for nothing. Why were the affected stakeholders not entitled to the same level of consideration at the start of 2017? This begs the question: Did APA believe that a fast approval was a foregone conclusion and that they could roll the community of the north-west so easily?

APA is currently under-offer for a takeover bid from Hong Kong Company CKI. The offer was cleared by Australia's competition watchdog in early September, although CKI is rejecting that the company has Chinese influence but this is unclear and misleading. ASPI’s Executive Director, Peter Jennings, comments here. 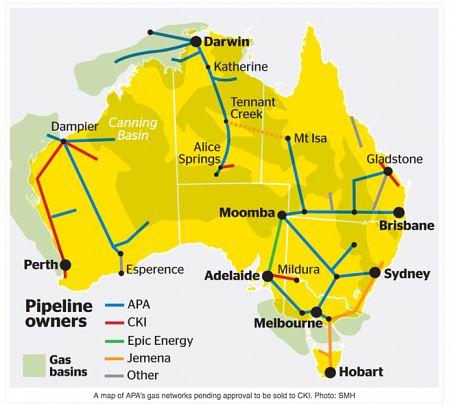 Despite these setbacks for APA and the seeming hibernation of the snake, the community will remain vigilant. Many community members will be in attendance at the AGM. They are familiar with how the snake will hibernate in winter, and wake up hungry and aggressive and they know that the snake is not dead until the sun sets.

This is where Santos and APA Group want to to put a 40" gas pipeline to transport coal seam gas from Pilliga.A magical place on Castlereagh River,Coonamble, filled with significant Aboriginal heritage, scar trees, burial trees.Absolutely a no-go zone for #CSG #nswpol #pipelines pic.twitter.com/pRVxXSYye2