Anti-vaxxers and the paedophile ring delusion

Many in the anti-vax brigade are caught up in the idea that they are crusading against a circle of elite paedophiles operating within the Government, writes Tom Tanuki.

Kelly was there to confer a scrap of theatrical political “power” to lead convoy influencers by offering “Hoody” and a select group the chance to go into Parliament and hand a list of their demands to Prime Minister Scott Morrison. (Obviously, they never got to do that. They just gave their paper to some secco or receptionist.)

Beforehand, Hood was quizzing his fans on what they actually wanted. They listened to their leader in his Qantas captain’s costume, hanging on his every word.

(“Hoody” is a show pony. Anti-lockdown crowd interactions with him have the vibe of a Wiggles concert for cooked adults. He often asks them if he should just go home and not be their spokesperson anymore, practically pouting on stage. “NO, HOODY! WE LOVE YOU!” they screech. Loves it. It’s like ‘Wake Up Jeff!’ for boomers concerned about the NWO.) 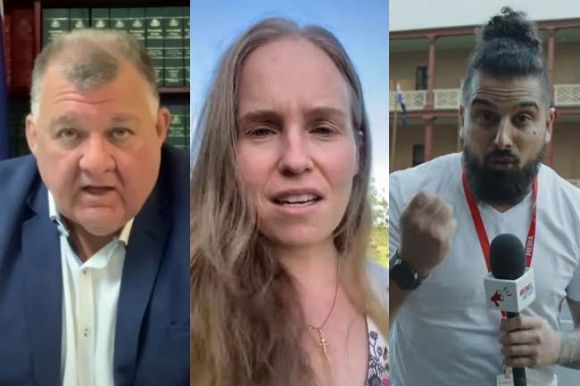 The anti-vax movement features a list of usual suspects ranging from politicians to social media attention-seekers.

“If we came out of Parliament House, and Scott Morrison made an announcement that mandates were over and borders were open, what would be your reaction?”

The crowd cheered, exuberant. “Yay!” cried a man in his 40s.

“Is that the main reason we’re here?”

(It’s good when you have to ask your movement why it is there.)

The crowd cheers again. Except for some.

“Yes, and the paedophiles!”

Graham sort of half-tries to ignore that. Another says: “No, just mandates.”

Some nod. Many look awkward, a few snatching a look around for cameras filming.

It’s brilliant footage that perfectly encapsulates a messaging dilemma the anti-lockdown movement has. They want Australia to know they’re all about vaccine mandates. And sure, many influencers would love it if they were. It would play better in the press. And that’s what most of them mean by their ‘Save our children!’ placards and chants — ending mandates for our kids and all that.

The inconvenient truth is that many of them actually mean saving our kids from an elite group of paedophiles. A sizeable chunk of them is mainly there for that reason.

I call them “paedophile fantasists”.

These stories aren’t peripheral in the anti-lockdown movement — they have become central to it, with a big bloc of their followers holding a core belief around elite paedophiles who need exposing in Canberra. I call them “fantasists” because we’re not talking about real paedophiles; we’re talking about a list that they manage. They actually invent paedos.

All their influencers pander to this narrative, although some try to minimise it. “Hoody” and Australia One Party candidate Riccardo Bosi spent the past week alluding to paedophile-protecting politicians in their speeches, to raucous applause. 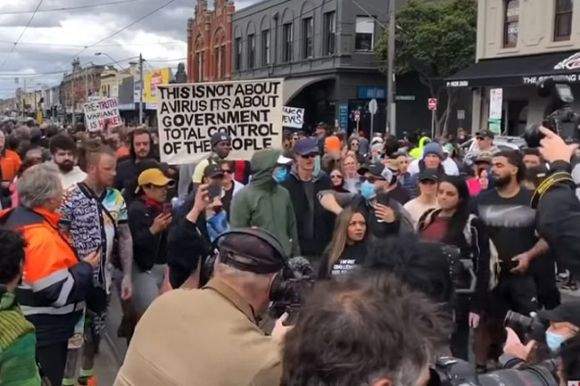 As the anti-lockdown crowds gathered outside the National Press Club waiting for Scott Morrison to arrive, one woman on a livestream was screaming at police:

“They’re all paedophiles. Scott Morrison is a convicted paedophile. Convicted! In this country, convicted!”

Paedophile fantasists are the product of a lineage of conspiracist fervour that stretches back many years. Australia more than pulls its own weight in contributing to this global problem.

There was a now-notorious speech that ex-Liberal Senator Bill Heffernan made in 2015 to a Senates Estimates hearing. Bill said that secret police documents name a list of 28 high-profile paedophiles, purportedly suppressed from public view by the Government. His speech was a clarion call for conspiracists across Australia that continues to ring; today, you hear talk of exposing “the 28” all around anti-lockdown protests.

Now, to be fair, Bill also used faked evidence in 2015 to accuse a Justice of the High Court of being a paedo. He also once pretended to be an ASIO agent. So Bill is not, in my view, to be relied upon for a fair accounting of institutional paedophilia. But whether Bill lied or embellished is now irrelevant. “The 28” has long since become an item of conspiracist folklore.

Sovereign citizen group Velvet Revolution spent a lot of January visiting police stations to notify them they were about to arrest lots of big names. For, what else, paedophilia. (Velvet Revolution is mostly made up of boomers who threaten to hang politicians for their mid-life crisis. Can’t afford a sports car.)

Their paedo accusations hinge on Heffernan’s 2015 speech, but they’ve been creative about it. They have a big placard they take out in public, with many famous names on it which they say is “the list”.

I won’t show it here. “The list” has three out of our last nine prime ministers on it, along with premiers, judges, media figures, you name it. Except they’ve actually listed 30 people. They were so paedophile-mad they had to go past 28. This isn’t Bill’s feted list, whatever that is — they’re literally writing paedophile fan fiction.

Heffernan’s claims were signal-boosted at the time by Fiona Barnett, who has been saying for years that she was a child victim of an elite paedophile ring. Fiona enjoyed a favourable media reception back in 2015, around the time of the Royal Commission into Institutional Responses to Child Sexual Abuse. But that’s changed over the years as her ever-mounting claims raised questions.

Fiona has talked about being abused by the late former Prime Minister Bob Hawke. And Paul Keating. And Richard Nixon (at Bohemian Grove, no less). And the founder of CNN, Ted Turner. And she said she was once at a Satanic Halloween ritual with Ivan Milat. And she suffered a near-death experience in a crypt buried underneath mountains of dead bodies of children. And she saw Queen Elizabeth preside over a Satanic ritual.

She may well have experienced a terrible childhood riddled with abuse. Child abuse is so common in Australia and I am not here to reduce or doubt that fact. But it is the depiction of abuse as an all-star celebrity horror narrative and not its tragic everyday reality that has made Fiona Barnett famous among conspiracists.

Fiona is an old warhorse in those circles, similar in this respect to Karen Brewer, who for years has been doing for Freemasons what Fiona does for Satanic ritual abuse — that is, gradually amassing a loyal audience by turning out content on the subject. (Karen’s evil Freemason bogeymen are all paedophiles too, as it happens.) These veteran figures weigh into new conspiracist circles with their sizeable, experienced follower bases, so their established narratives spread with ease.

Many commentators call all paedophile fantasists “QAnon”. That’s become media shorthand for “That American Spy Fantasy Where Hillary is a Satanic Paedophile, and 6 January”.

Sure, QAnon adherents are around in Canberra, but it’s more complex than that and the label is sloppy. Bill’s speech and its rapturous reception happened long before the Q rubbish. Fiona was around for even longer than that. In fact, Fiona Barnett is named in Fall of the Cabal, a ten-part early QAnon “documentary” which helped to red-pill many budding conspiracists in the early Q era.

Early Q content was inspired by Fiona — not the other way around. What I’m saying is: we don’t get to palm off Australian responsibility on to QAnon when we have ourselves been fostering these narratives for far longer.

Rabble-rousing paedophile-hunting schtick is a populist alarm bell of choice with a long lineage, which even QAnon is only a late heir to, stemming back to old antisemitic conspiracies about Jewish “blood libel”. (The old conspiracy about Jews murdering Christian children for their blood.) Fiona and Bill’s brainworms are localised heirs to the U.S.-born Satanic Panic of the 1980s, where Satanic child abuse rumours used paranoia to weaponise an ultra-Christian audience.

This is what we are watching happening in the anti-lockdown movement in a microcosmic way. (“Hoody” is a born-again and a preacher himself, riding the rising wave of performative Christian schtick in the anti-lockdown space. He yammered on to thousands in Canberra about how Satan was in Parliament House.)

Grim paedo fairy tales help confect a sense of solidarity against a common enemy. It’s better when you can make that enemy up and change it as suits your political purpose.

The only tangible update about Bill’s list I’ve heard lately came last week from One Nation’s Malcolm Roberts. He spoke to the crowd in Canberra and I was impressed to see his futile attempt at clarity. He explained that when he entered his second term in office he reached out to “an ex-senator” to investigate “a list” of paedophiles. (He doesn’t name Heffernan but it’s pretty obvious who he means, unless there’s another reserve of ex-senators hanging around with infamous paedo lists.)

Roberts said he had a barrister review a “suitcase” of evidence. The conclusion was that there was either no evidence or not enough to prosecute anyone with.

The crowd began jeering him.

And anybody playing that game doesn’t really give a shit about vaccine mandates.