Another year of mud and smear

2013 will be another year of smear, says Rodney E. Lever, based on the long history of the bloody, muddy, battles between Australia's major political parties.

AS WE PUT the holiday season behind us, what's left is a kind of grim foreboding that in 2013 we will undergo another year of political bastardy, just like the year we have put behind us.

If Tony Abbott and his field of artful dodgers happen to win the forthcoming Australian election, nobody can anticipate the changes that will affect the future of this country.

The Coalition partners have a long historical record of springing unexpected changes based on false claims of Labor’s “poor economic management,” as if they have nothing else to sell.

We have seen this happen in the recent elections in Queensland, New South Wales and Victoria.

Their moves have shaken the roots of those states and angered its citizens. Actions that are yet to show their full destructiveness and will have repercussions that will take a long time – and a great deal of extra money – to correct.

The Australian Labor Party is far from perfect.

However, after voting in more elections than I could be bothered to count, I see today’s Labor Government as being further ahead of the Coalition, in terms of political achievement, than any Labor government I can remember.

My first opportunity to vote in a federal election came in 1951. I voted for Sir Robert Menzies. His was the calm and persuasive voice that announced on the radio in 1939 it was his "melancholy duty" to inform us that Great Britain was now at war with Germany. He then said “therefore Australia is at war with Germany” — as if we had no other choice.

This was a time when we kids went to the Saturday afternoon picture shows. When the screen lit up, the first thing we saw was the face of King George VI and we all sang “God Save the King.”

I was seven years old when I heard that broadcast on the ABC, which was also seven years old at the time. Patriotism was in the air. The thought of war was exciting to an imaginative small boy. 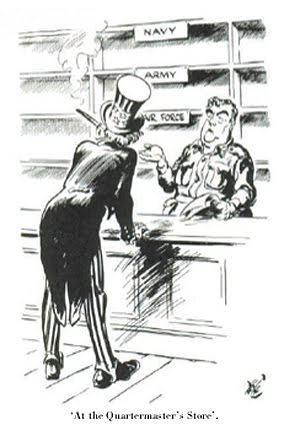 That was the first and only time I ever voted for Menzies, for I was growing up and learning and reading voraciously. I became aware, as did the rest of Australia, that Menzies was lazy, unimaginative, boring and heavily indebted to the newspaper barons of Australia and England.

Later in life, I was to read some of his grovelling letters to Keith Murdoch (Rupert Murdoch’s father) and to the British newspaper Lords — Astor and Beaverbrook.

In the late 1930s, Menzies was foreign minister in the United Australia Party headed by Joe Lyons. He went to Britain to see Neville Chamberlain, and then went on to Germany to meet some Nazi leaders. He was wined and dined by Ribbentrop, Goering and Goebbels. He did not get to meet Adolf Hitler.

Menzies wrote to Lyons describing the Nazis as “a bunch of jolly good fellows”. That letter is still among the Menzies papers in the National Library of Australia.

Menzies recognised that his UAP was on shaky ground politically, with a hung parliament. He worked out a deal with Earle Page, head of the Country Party.

The result was a coalition in name only; a coalition which remained unsettled and for more than thirty years seemed likely to fall apart at any time. 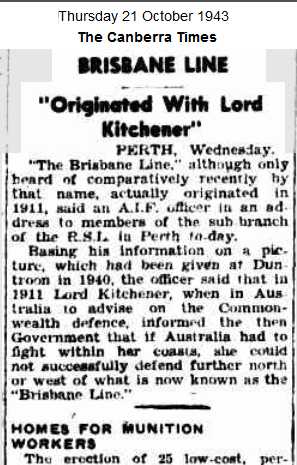 When the war started, Menzies fell out of favour with the electorate as well as the Country Party. To deal with the rising militarism of  Japan, he decided to pick up the pre-World War I plan of an ageing British General, Lord Kitchener, who had visited Australia in 1910-11 to advise on defence.

A threat from Japan had hung over Australia for years, along with a belief that if Britain fell to the Germans the Japanese would invade our country.

Kitchener’s advice was, on the threat of invasion, to slice Australia in two. The scheme became known as the Brisbane Line. It would create a border stretching across the country from the Pacific to the Indian oceans. An over populated Japan would be invited to take over all the area to the north of the line.

Attempts have been made over the years to pretend that such a scheme never existed. It certainly got no further than the Country Party when they got wind of it. The huge powerful landholders of northern Australia would never stand for it.

There would have been a war civil war in Australia – an internal revolution – if such a thing had been even considered.

Of course, William Manchester’s magnificent biography of Winston Churchill, The Last Lion, reveals the architect of Menzies' plan, Lord Kitchener, as being a master of military incompetence. He unquestionably bore the blame for the Gallipoli fiasco.

The Second World War had no sooner started than the Page-Menzies coalition collapsed. Earle Page resigned followed by Menzies. Arthur Fadden, a Queenslander, took charge of the UAP, but lasted only four weeks, massively defeated in a vote on the floor of the House.

The Labor Party, under John Curtin, took office and Australia began, seriously, to go to war.

Thus began a trend that has existed in Australia from the beginning of Federation — when Australia is in trouble, get Labor to fix it.

John Curtin led Labor for nearly four years of the war. He literally worked himself to death.

At the heart of his success was the engine driver from Bathurst, Ben Chifley — the man who saw the light on the hill for Australia’s future.

Chifley's cautious reluctance to end some of the necessary wartime restrictions too soon after the war was the cause of some unpopularity.

After five years of rationing – petrol, clothes, sugar, butter, beer and smokes – the country wanted a return to “the good old days”.

Menzies campaigned against this, as well as a plan by Chifley to nationalise all the Australian private banks into one Commonwealth banking system.

This suggestion sparked a flood of panicky banking industry donations into the Menzies campaign. Not only that, but it created a grand opportunity to dramatise the situation using the postwar horror word: “Communism”.

Chifley’s aim had been simply to force a national banking system into financing a new era of post-war industrial development.

Australian banks were notoriously tight when it came to lending for new ventures and housing. Getting a home loan in those days was like picking the winner of the Melbourne Cup. If you knew somebody who knew somebody and if you were lucky, you might get a loan. Only then to have to spend the rest of your life paying it off.

Tens of thousands of young soldiers were coming back from the war wanting to build a home and start a family. Postwar immigration would start a new era of population growth. Dispossessed European refugees began arriving in daily shiploads. At the beginning of the war Australia’s population was a mere seven million. Soon it would double and treble.

All these new citizens would need to borrow money to restart their lives.

These were the things the far-seeing Chifley wanted. However the private banks, still reeling from the losses in the depression of the 1930s were unwilling to take risks.

All this meant Menzies was back. He ran this country for 22 somnolent years.

Labor’s troubles were mounting, with splits in the party as members tried to sort out divided loyalties. The Menzies coalition kicked the enemy when it was down and, somehow, Labor seemed to go to pieces.

Whitlam then came along, raising Labor’s hopes and expectations of the party and the country. Rupert Murdoch tore them down, not once, not twice, but three times. He will try to do it again in his own personal interest.

There is one more thing that needs to be said at the start of this election year.

There is no question that this year is vital in terms of who will lead this country for the next four years.

It would be much better if angry arguments and insults could be turned into logical discussion. It is easy to argue and shout. It is less easy to converse rationally and persuasively.

Great politicians (and there have been many over the centuries) work hard on their speeches, sometimes for days or weeks before they utter them. Fiery argument is not always truthful or accurate. More often it is as irrational and meaningless as slinging handfuls of mud.