Angus Taylor and the Coalition press the nuclear button

Energy Minister Angus Taylor and the nuclear boosters in the Coalition are prone to accept garbage as gospel, writes Giles Parkinson.

AUSTRALIA'S Energy Minister Angus Taylor has campaigned against renewables since before he entered Parliament in 2013, appearing at anti-wind events organised by an anonymous and unpleasant website, and vowing on many occasions to scrap the renewable energy target.

He has been powerless to stop the build-out of wind and solar, although he has complained about it often enough. But now Taylor and the Coalition Government have taken their war against wind and solar to its next inevitable phase: they’ve pressed the nuclear button.

Taylor revealed late Friday that he had asked the Environment and Energy Standing Committee to launch a new inquiry into nuclear energy, including its costs and issues of waste and so on. They’ve got four months to produce a report.

Taylor insists that there is no intention to repeal the laws that outlaw nuclear energy in Australia. But that beggars the question, why have the inquiry in the first place?

The answer is simple. As Taylor revealed in an interview on ABC’s AM program, he simply doesn’t accept that renewables can power the electricity grid. A view that is loudly shared by many of his Coalition colleagues, the Murdoch media and of course the coal industry.

The timing of the announcement is interesting. It comes just a couple of days after the end of the Parliamentary sitting week (they won’t be back again until September) and just as the country’s far-right conservatives got ready to gather at the Australian Conservative Political Action Conference.

Tellingly, this is the first policy or initiative that Taylor has announced since the shock re-election of the Coalition Government in May, and comes after a major push by the far-right ideologues of this conservative Government to reconsider the ban on nuclear.

This is no coincidence. This is not about carbon emissions and it is certainly not about cheap energy. The common enemy of these people is wind and solar, and the shift from a centralised system based around “baseload” fossil fuel generators to a renewable system that is largely decentralised (and democratised), and based around renewables, storage and demand management.

Australia is one of those regions – like Germany and California – that is at the forefront of this transition, and the fossil fuel industry view is that it cannot be allowed to succeed.

So it is no coincidence that the biggest industry supporter of nuclear is the coal lobby itself, in the guise of the Minerals Council of Australia (MCA), which is also pushing for new coal generators and urging the Government to do as little as possible on climate.

The MCA is cosy with the Coalition – its former CEO and deputy CEOs are now key advisors in Prime Minister Scott Morrison’s office, and its chair is the former Coalition Senator Helen Coonan. Its current CEO, Tania Constable, was appointed by the Coalition Government to the board of the ABC, over-riding independent recommendations.

A new dimension is also added.

One of the noisiest opponents of renewable energy technologies is Trevor St Baker, pushing for new coal generators. His Vales Point coal generator in NSW – currently in the queue to get Federal Government funding to remain open beyond its schedule closure date – is also the founder of the company, SMR Nuclear, that's looking at new “modular” nuclear technologies, that Taylor suggests could be a focus of this inquiry.

Like St Baker, the likes of Constable argue that only nuclear is able to deliver 24/7 emissions-free power. They insist it is “cheap”, but that is nonsense.

The International Energy Agency desperately wants nuclear to succeed, but it concedes that costs have surged, as this graph (above) from a recent report illustrates. While the cost of solar has fallen 95% over the past decade and the cost of battery storage by some 70%, the cost of nuclear has more than trebled upwards.

Even re-fitting existing stations was considered more expensive than wind and solar, although as BloombergNEF founder and now commentator Michael Liebreich has pointed out, the costs might be close enough to convince some countries to extend their life.

But there is no economic case for new nuclear,  Liebreich says. Cost blowouts are occurring in the UK with Hinckley, and in France and in Finland with their versions of the latest technology, as it is in China (which has begun no new projects in the last three years) and in the U.S., as Leibreich noted. 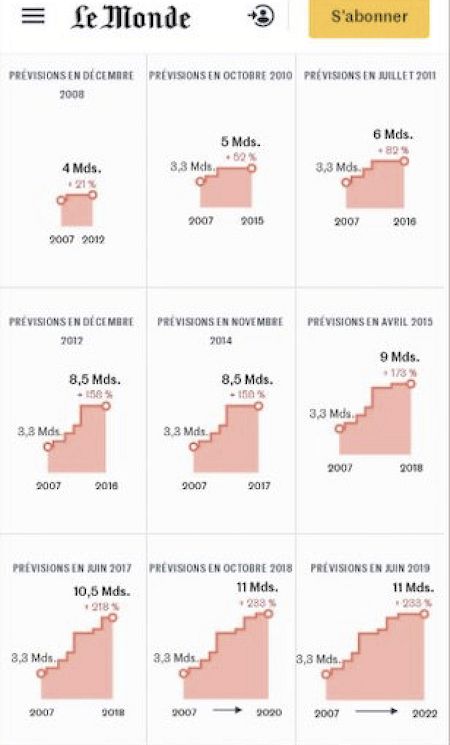 As Leibreich noted, this graph from Le Monde in France illustrates how costs have surged in its next generation technology at its flagship project in Flamanville. It was begun in 2017 with promises it would be finished in 2012 at a cost of €3.5 billion (AU$5.83 billion). The latest delay and cost blowout have pushed the assumed finish date to 2022 and the new estimate of costs to €11.5 billion (AU$19.17 billion).

Into this debate recently landed Industry Super Australia (ISA), the union fund research body with a report that is quite possibly one of the most inept analyses of the energy industry that has been produced in Australia. And that says something because it has had strong competition. The ISA and the ISF, that oversee it, should be embarrassed that it is published in its name.

To address the issue of costs, the ISA report produces a completely nonsensical “capital cost” assumption that confuses output with capacity factors and multiplies it by the cost of solar plants built more than five years ago. 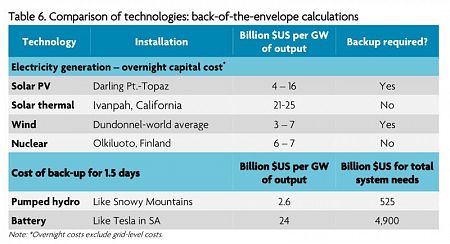 It delivers a figure of $16 billion per gigawatt for the cost of solar. It is not a rough “back of the envelope” calculation as the authors try to claim, it is complete and utter garbage.

Among its other laughable claims are that Australia would need “100” Snowy 2.0 pumped hydro schemes, or 72,000 Tesla big batteries, were it to go 100 per cent renewables.

It’s a preposterous number that completely misunderstands the workings of the energy system and the role of storage technologies, and fails to appreciate that if we do electrify everything, then we will be using less energy, not more.

Apart from now being expensive and polluting, burning fossil fuels is hugely inefficient – most of it disappears as heat, be it in a coal fired power station or in the internal combustion engine of a car – and it is two or three times more wasteful than electric motors and batteries.

But the authors of this report seek to mislead, either deliberately or through their ignorance. They make the patently false claim that fossil fuel plants 'do not need back up'. Try running that past anyone who actually operates an electricity grid and has to deal with large plants that need regular maintenance, or, which may trip for any number of reasons.

The study is so poorly researched it even claims that the Invanpah Solar Power Facility in California does not need back-up.

If the authors bothered to spend two minutes researching that project, rather than relying on the blogs of nuclear fantasists, they would have discovered that it has no storage and needs gas plants to help fire it up in the morning. Yes, it was costly, but it turned out to be such a bad idea that no plant like it has, or will, be built again. All new solar towers do and will have storage.

But the authors’ minds were set. They even dismiss the reaction to the disasters at Chernobyl, Fukushima and Three Mile Island to “behavioural bias” and compare the lot of the nuclear industry with that of a baseball pitcher in the 1930s — Chad Bradford, who had an unusual throwing action.

'They just judged him on the way he looked. So they demoted him to the minor leagues for a time,'  they plead.

For heaven's sake, nuclear is not judged by the way it looks, or its throwing action, but for its costs. And the CSIRO and the Australian Energy Market Operator, like the IEA, have made it clear that nuclear – like new coal – costs a multiple more than the cheapest alternatives, wind and solar backed by dispatchable capacity — be that pumped hydro, batteries, or demand management.

You won’t see baseload mentioned in AEMO’s 'Integrated System Plan', the 20-year blueprint for the future. Neither will you see it championed by the grid operators in the UK, or China. The world has moved on.

AEMO says Australia has the technology and know-how to move to 100 per cent renewables, although they would differ about the timeframe from the most enthusiastic renewables supporters.

The problem is that like the ISA report, the nuclear boosters in the Coalition are prone to accept garbage as gospel.

The energy industry has largely dismissed nuclear as an option in Australia, knowing that it is absurdly expensive, and that if it were built in Australia it would take so long – possibly two decades at the very least – that the country would be powered almost exclusively by much cheaper wind and solar and dispatchable storage by that time (if allowed to).

But Ted O’Brien, the chair of the committee reviewing the nuclear issue (it is stacked with four out of seven members from the Coalition) has already made up his mind.

Like his Coalition colleague, Craig Kelly, lampooned in the cartoon above, he’s long been a big fan of nuclear and given his analysis of Labor’s energy policy – he said it would be a tax on Tim Tams – he might have been about as thorough in his assessment of nuclear as Homer Simpson.

Don’t laugh. These people really are that stupid. They are not interested in the advice of experts — be it on climate science, energy technologies, or electric vehicles. But one thing they can’t admit is that the Greens – and now the rest of the energy industry – are right about wind and solar, and the focus on “dispatchable” power rather than “base-load”.

If Australia can demonstrate that a modern economy can be run on a predominantly renewables grid, it’s all over for the fossil fuel industry across the world. So expect this push to have some powerful friends — and not just in the media industry, and not just in Australia.

Note: The Australian Financial Review has repeatedly cited the ISA report, saying at one point in an editorial:

'These are not the ravings of some pro-coal lobby but of the organisation partly run by trade union representatives and charged with investing workers’ retirement savings.'

Er, bollocks. It should also be noted that the ISA report attempts to give itself the veneer of some credibility by prominently citing some notable renewable energy supporters in its acknowledgements. But those cited don’t want a bar of it.

Tony Wood, from the Grattan Institute, said he had given the authors some feedback and told them he disputed many of their contentions. Dan Cass, from The Australia Institute, said he did not endorse the report. "We had a chat but they didn’t even mention nuclear,”  he told us.

Another cited person, Professor Ross Garnaut has already made his thoughts clear: 'Australia could reach 100% renewables by the early 2030s'. It’s the economics, you see.

You can follow Giles Parkinson on Twitter @GilesParkinson. This article was originally published in RenewEconomy under the title 'Taylor presses nuclear button, as energy wars enter dangerous new phase' and has been republished with permission.

did you know that we're about to have *two* parliamentary inquiries into nuclear? 🤯

"australia has energy experts coming out the wazoo that are so much better placed to keep a watching brief on [nuclear] than a rabble of energy illiterate MPs", says me.https://t.co/NOVzsRDqI3