One of these was the ABC’s Andrew Probyn, who smirkingly stood to awkwardly stammer the following:

“Mr Dreyfus, when you were in opposition, unfairly or fairly you gained the reputation as the dobber-in-chief. You referred quite a few ministers to the AFP [Australian Federal Police], indeed, predecessors of yours as Attorney General, both George Brandis and Christian Porter.”

“So, when it comes to the National Anti-Corruption Commission, when will referrals be made and, conversely what punishment would there be for public disclosure of false allegations, given that the reputational damage is evident, to coin a phrase, that perhaps reputations would be knackered?”

Maybe if Probyn stuck to his notes, and eased up on sledges & terrible puns, he might not fluff the question (that's not the question you asked, champ!!).#auspol pic.twitter.com/Obswb9ogpM

Probyn’s clear, albeit ineloquent, imputation was that Dreyfus was a dirty dibber-dobber of Coalition politicians to the Feds and had spoiled everything, “knackering” his mates’ peerless reputations.

With a due sense of rising despair, we urge you to stay with us, as we now consider Probyn’s words.

A more international name for Probyn’s “dobber” is “tattle-tale”. And “no one likes a tattle-tale”, so the saying goes.

In a more official context, dobbers and tattle-tales are called “whistleblowers”.

Former NSW Police Commissioner Tony Lauer has this to say about Australian whistleblowers:

"Nobody in Australia much likes whistleblowers, particularly in an organisation like the police or the Government."

By calling Dreyfus “dobber-in-chief” Probyn was simply harking back to the sort of playground bullying almost all of us endured as children.

A mocking “snitches get stitches!” called out after a tearful little Andy as he raced tearfully away to tell his Mum about the big bully, which might explain Probyn’s barely restrained glee at calling Dreyfus a “dobber”. Look who’s the bully now, Dreyfus!

Of course, the child Probyn would not have been alone —  it is an unwritten national law, told from the Top-end to the Tasman, that you must never, ever, EVER dob.

As we have seen time after time, over many years, in our work investigating corruption at Independent Australia, whistleblowers invariably become unemployed, alienated, ostracised, humiliated, defunded, psychologically scarred and frequently end up in gaol themselves – or worse – rather than the crooks they had sought to expose. 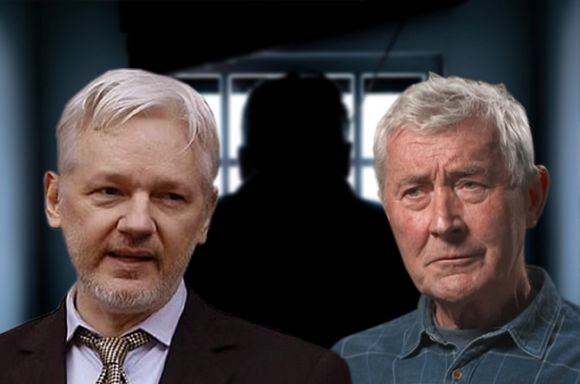 Yet Probyn’s main concern was protecting the reputations of his Coalition colleagues. Oddly enough, or maybe not so much, his concerns matched, almost word-for-word, those MPs on that Committee who happened to come from the conservative side of politics. Remarkable, that!

Then last Sunday, Probyn’s fellow “insiders” wasted much of their allotted hour fruitlessly discussing whether exposing corruption is really in the nation’s best interests. “Would cleaning up federal politics really save the nation much money” was a surprisingly strongly contested topic of debate.

The perversity of our media is so extreme, It might be funny ─ if it didn’t just make you speechless with justified rage. The closeted Press Gang’s opposition to eliminating corruption is so firmly resolute, one might almost think they feel somehow complicit. Surely not!

REFERRING TO THE AFP

What Andy didn’t say is that Dreyfus might as well have complained to the bloke behind the counter at the local servo. Because, when it comes to hunting down corruption, let’s be quite clear here, the AFP is as effective as Elmer Fudd.

The AFP might loosely be described as an organisation that gives the impression of earnest and serious intent, but everybody knows its shotgun barrel is badly bent. Well, it looks bent, at any rate. 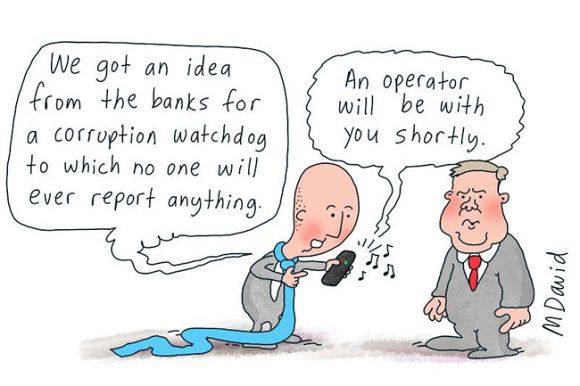 Labor's new anti-corruption legislation may prove to be a signal moment but the devil is in the detail.

Here’s a quick quiz: Which politicians have the AFP ever charged? Ever?

Apart from the accident-prone Peter Slipper, not a one that we can find. And even with Slipper, the AFP buggered that up in a desperate attempt to find something, anything, to suck up to its Coalition overlords. In the final wash-up, Slipper was never convicted of anything.

Unless you have had your head in a soup jar for the last decade or so, you’ll know that the last Coalition Government(s) had more crime and peculation than the Boggo Road post-Fitzgerald Inquiry, but the AFP didn’t bag a single crooked pollie. Almost like it didn’t want to.

Hey, didn’t Tony Abbott live for a while at the AFP barracks?

Neither Brandis nor Porter ever had anything to worry about. The fix, as they say, was always in.

Probyn’s dreadful fear, expressed as only a terrified Coalition stooge can, is that a corruption commission has the potential to destroy some Coalition careers.

Just remind yourself, stamping out public corruption and crooks rorting our system is, to Probyn and those of his ilk, far less a priority than ensuring a few politicians are able to enjoy their lavish retirement benefits without any sense of embarrassment.

That just wouldn’t do!

The poster chick for this attempt at argument is none other than former NSW Premier Gladys Berejiklian. 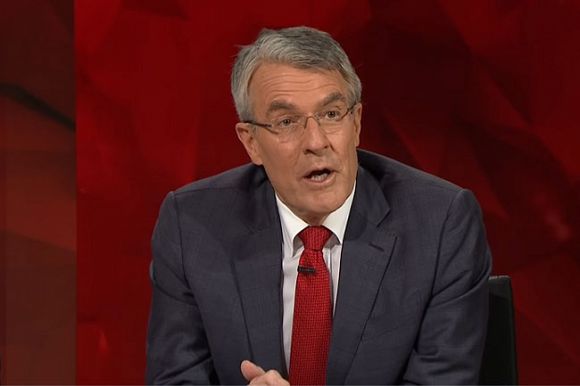 Hounded from office by a NSW ICAC witch-hunt, so the argument went, with absolutely no evidence of wrongdoing, Glad’s only problem was she fell for the wrong guy. Not her fault, the Coalition narrative rinsed and repeated endlessly, ever amplified by faithful cronies like Andy.

Lots of women fall for rotten men. Been happening since Eve was in short skirts. No evidence of malfeasance on her part. Heavens, no!

Except, inconveniently, there was. Gladys covered up the fact that, as Premier of NSW, she conducted a clandestine affair with a person she knew, or ought to have well and truly been aware of the allegations that he was engaged in repeated, flagrant, alleged criminal conduct.

That alone should see her banished from the kingdom, rather than enjoying the largesse of a foreign-owned telco where customer privacy is a mere afterthought, a boil to be lanced only after it inconveniently suppurates.

Maybe this is the sort of privacy and reputation protection Probyn pines for.

The NSW ICAC is yet to release its report into the recklessly amorous Premier — who knows what gleaming nuggets it may unearth?

Andy’s snooty accusation to Dreyfus that he is a dobber, the lowest of the low, was a sad attempt by one of the ABC’s most annoying and out-of-touch hacks to disguise his curated anti-Labor bias behind a shield of infantile playground tough-guy. 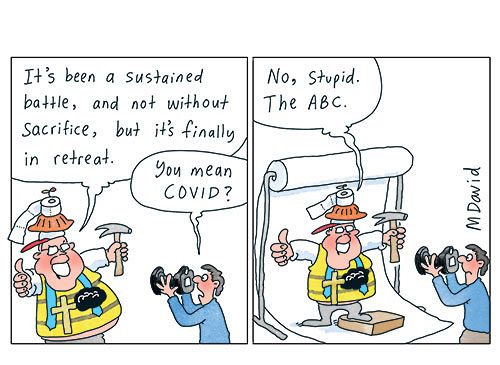 Supposing the Morrison Government wanted to turn successive failures to destroy the ABC's credibility into a success story, it could not do better than make significant Murdoch appointments to the ABC board.