And then there were none: Inside Tony Abbott’s new menistry

The problem isn’t so much that there is only one woman in Tony Abbott's cabinet, says Sarah Brasch — it’s that there are really none. 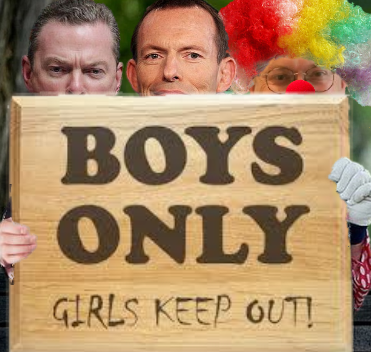 So far, the preparation for government plan does not appear to be as methodical as the four-year election campaign.

It’s not about there being just one lonely female in Abbott's cabinet — but that there really aren’t any.

The new PM forgot to mention that important foreign affairs will keep Julie Bishop out of the country for most of the next three years.

Her business items in Cabinet will often be handled by one of the 18 other males. No substitutes here, thank you. Cabinet seats are jealously guarded and no one else gets to go unless they’ve got good reason to be there.

Alas, our new Foreign Minister will also miss out on corridor chats, late night “working sessions”, tough negotiations with the blokes, a spot on the all-important Expenditure Review Committee, where all the important money decisions are made, but it’s all OK — she’ll be testing out international tourism hands-on, one of her department’s new tasks.

The other one is international aid, but I guess that won’t be too popular on the cocktail circuit. Doesn’t really fit well with the sequins we saw on Rage.

Worst of all, there are no feminists in Cabinet.

Not a single one. Anthony John 'Bronwyn' Abbott, Chrissy Pyne and George 'Clown Counsel' Brandis don’t get anywhere near the cut — not that one anyway.

However, Her Majesty the Queen of Australia will be there in spirit presiding over deliberations. After all, she is the head of our national government.

HM, who made a big comeback at the swearing-in, has the experience – and certainly has done the time – to make a stellar contribution representing all the women of Australia. On current form, her guidance will be sorely needed by the team.

In an attempt to stave off raging feminists, the PM has declared himself Minister for Women and moved the Office of Women back into his own department from where it was banished by Howard.

Yes, dear women readers, you have your own Office in the national capital. There is no Office for Men, of course. But then, they don’t need one.

However, a health warning is in order: cool your kitten heels (spring fashion tip) before getting too excited and starting to cry.

Yes, your Office will now be at 1 National Circuit – knew our regional and rural mates would be in the mix somewhere – the best public service address in Canberra.

But Abbott will be sure to appoint another well-coiffed Liberal gender equality denier ‒ think Pru Goward ‒ to head it up. The clothes will be stylish, the heels high, the make-up conservative perfect. They must use the same woman Kevin had.

After that, all the good staff ‒ that is, those not already sacked ‒ will leave, frustrated to death.

Just because your Office, dear women, must now get to see every submission going to Cabinet, it doesn’t mean that the advice will be right — or even taken.

Besides, it’s really now the Office for Women’s Family Responsibilities, Other Domestic Obligations and Unequal Amount of Housework including Ironing – as personally decreed by the PM and senior Minister for Women – so we can’t expect much to come out of it.

So being done with the fem-free Cabinet zone, is there anything to see in the Outer Ministry?

Of the lower-order females, the Nationals Fiona Nash (she of the RU486 gang, hooray!) would have got a ministerial gig anyway as Nationals Deputy Leader in the Senate, while Sussan Ley (Member for Farrer, NSW) and Marise Payne (Liberal Senator for NSW) were also allocated junior jobs.

The assistant ministers only help out with less important portfolio tasks, like making tea and baking scones, so they are good jobs for women.

Michaelia Cash, also a Senator, is to assist the PM with “women”. That doesn’t inspire confidence on either account. She will also be “assisting” on Immigration and Border Protection, which is sure to take up most ‒ if not all ‒ of her time. Only Senator Payne has a portfolio in her own right (Human Services) although she’s still a junior in Kevin 'Master of Disaster' Andrews' mega Social Services empire.

Beats me why the experienced Ley – whose formidable talents were fully displayed on Kitchen Cabinet, is not in the real Cabinet – even if she is from the Nationals. Perhaps she has not done “her time”?

It ‘s also hard to fathom why there is only one female parliamentary secretary in Abbott’s beauty parade. These mini-minister jobs are a training ground and provide the talent pool for promotions. That’s how you get “experience” — unless you do something really important for the party. For those on the way up anyway.

And it is not just the Coalition women who missed out in Abbott’s first Ministry.

What of Ken Wyatt (Hasluck, WA), the first Indigenous member in the House of Representatives? After three years learning the ropes, why wasn’t he appointed to at least a parliamentary secretary position? Peter Garrett did the Environment Minister’s job in a new Government after his first three years on the Labor backbench.

There also isn’t anyone under 30, openly gay or with non-European heritage in the new Ministry — in any capacity.