Bob Ellis highlights a tragic week or mishaps, mistakes, pratfalls and disasters from the Abbott Government.

WHAT A WEEK in Australian politics. A week of woe for the Abbott Government.

Abbott, who will spend more on his sea-search for scrap metal than it would have cost to save five thousand Qantas jobs or keep Holden in Australia.

No price is too high for Australia to pay to find this watery grave, he’s said:

“We aren't counting the cost; we're just doing what needs to be done to try to get to the bottom of this mystery and that will go on.”

But, as we reported, it’s very likely, no matter how much money is thrown at the search, MH370 may never be found.

Attorney-General George Brandis green-lighted school bullying when he affirmed, last week, our right to be bigots.

Abbott with his knighthoods made second class citizens of every Australian of the Year, while Brandis made Adam Goodes a second class citizen by licensing the bigotry he hates and fights and suffered in childhood — saying his bullies had a right to bully him.

Adam Goodes is Australian of the Year.

Howard rejecting his knighthood means no others can be offered, by Abbott, to anyone.

Meanwhile, if Malaysian Opposition leader Anwar Ibrahim jumped bail and came to Australia by boat, he’d be locked up in Manus for the rest of his life — in PNG, homosexuals are gaoled.

Scott Morrison has three murderers still on his payroll and is unfazed by this, thus proving he is insane. Covering up a murder, as he apparently wants to do, is a crime.

Hockey thought it smart to say: “The age of entitlement is over” just as the age of titles returned.

He also thought it was smart also to promise a million new jobs while cutting tens of billions in government money from programs that created new jobs or maintained old ones.

Abbott thought he’d make friends by announcing two knighthoods, but he repelled five hundred party donors who now for sure won’t get one.

You can read more by Bob Ellis on his website Table Talk. 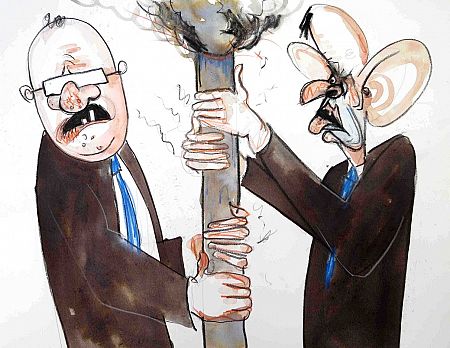