SUBSCRIBE   DONATE LOGIN SHOP
SUBSCRIBE   DONATE
How we prevented a Morrison dictatorship
How Howard screwed the Libs
U.S. site tries to ruin what makes fairy bread great
Bloody Idiot of the Week — Episode 28: Get used to it
Morrison's 'politics of retribution'
Economics

AUSTRALIA was well-managed from 2007 to 2013. Now, in contrast, many economic and social indicators are deteriorating badly.

Those two claims are not from the Abbott Government’s hostile opponents. They are derived from the Government's own publications.

Virtually all recent periodical reports have revealed the abject failure of this Government to match the performance of its predecessor — despite much more benign global conditions. They confirm breaches of many pre-election commitments.

Latest Bureau of Statistics (ABS) figures show the jobless rate over the last six months fluctuated between 6.1 and 6.4%.

That is significantly higher than for the equivalent period under Labor two years ago with fluctuation between 5.2 and 5.5%. [6202.0, table 2, seasonally adjusted] 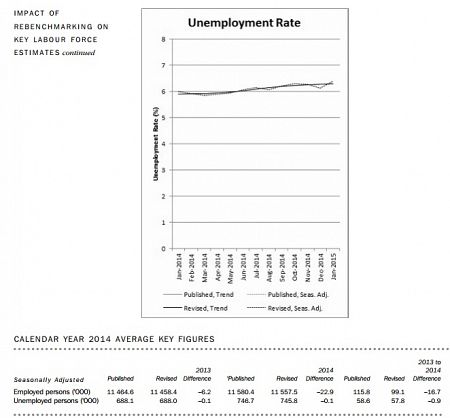 According to the ABS’ William Milne:

“Just over 27 per cent of persons remanded in full-time custody were of Aboriginal and/or Torres Strait Islander origin in the December quarter 2014.”

In the first full year of the Abbott Government, however, the increase was 9.9%.

According to Indigenous authorities this is the result of cut-backs to vital services.

Finance Department monthly reports in 2013 show net debt left by Labor was $178.1 billion. This, according to Abbott, Treasurer Joe Hockey and others in the Coalition was “a debt disaster”.

They assured the nation that the Coalition had

So is the debt now falling towards the $148 billion mark?

Afraid not. This week’s Finance report shows net debt in February was $255 billion. 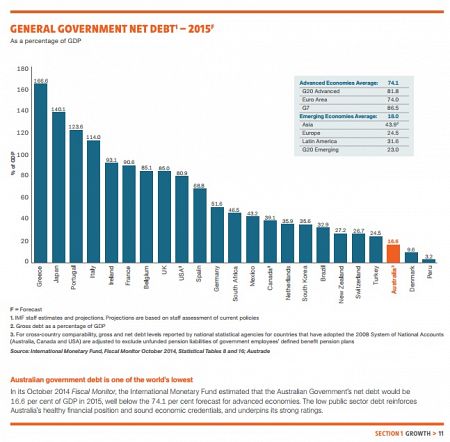 The Finance reports which show net debt also reveal other failures. Total net worth – all assets minus all liabilities in the federal government general sector – is a critical one.

During the GFC which the Rudd and Gillard Governments managed, Australia’s net worth shifted from positive to negative in January 2010. In other words, total liabilities began to exceed total assets.

Net liabilities peaked under Labor at -$259.1 billion in December 2012. Thereafter, the position gradually improved as assets increased and debts were paid off. By October 2013, the net worth reached -$210.5 billion. That’s a gain over that ten month period of almost $50 billion.

Since then, under the hapless Abbott regime, net worth has plummeted. This week’s figures show liabilities have blown out to $712.8 billion, leaving the net worth at an all-time low of -$301.5 billion. That is a deterioration of $91 billion. In 15 months.

Perhaps the most devastating recent document for the Abbott Government is the Trade Department’s, Why Australia: Benchmark Report 2015.

This lays bare many of the outright lies Abbott and Hockey have been repeating for years.

“The best way to reduce cost of living pressures, while maintaining and improving the services that Australians want, is to return as swiftly as possible to strong economic growth. Under the current [then Labor] government, GDP growth has been due to higher population, not higher productivity.”

'The Australian economy remains resilient; sustained by sound macroeconomic policies ... Australia is the only developed economy to have recorded no annual recessions during the past 23 years, placing it alongside high-growth economies such as China and India.' 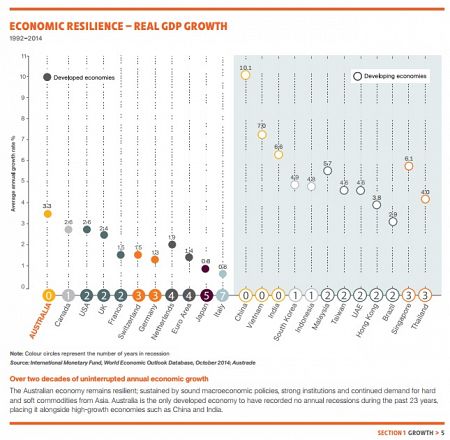 On page 8, the report states:

'The productivity levels of 16 out of 20 Australian industries rate above the average productivity of global competitors in the same sector. Australia is more than 20 per cent above this global average in five key growth sectors including gas, education, health and tourism, and over 40 per cent in agribusiness, oil and mining.'

Both those quotes are based on data published in October 2013.

The Trade report affirms the opposite (Page 33):

'Australia has enjoyed a sustained period of labour productivity growth exceeding growth in real wages. Over Australia’s 23 years of consecutive economic growth, labour productivity has recorded a compound annual growth rate of 1.8 per cent per annum, while real unit labour costs have fallen by 0.5 per cent each year.' 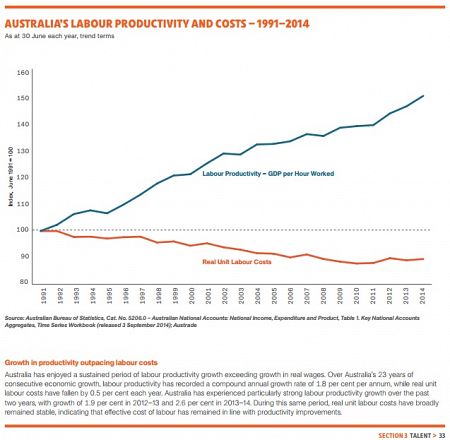 'Under the Rudd/Gillard Government the economy has gone backwards in key areas, with more taxes, a much heavier regulatory burden on business, less flexible labour markets and less competition in key sectors such as banking.'

The Trade report exposes this as completely false (Page 52):

'Doing business in Australia is easy. The country’s efficient and transparent regulatory system provides a safe environment. Its political stability and sound legal and governance frameworks offer a stable and secure setting for business. For six years in a row, Australia has ranked third on the Index of Economic Freedom.'

Only Singapore and Hong Kong have less red tape than Australia.

So four glaring messages leap from the pages of official reports from Australia’s government departments, confirming the messages from international agencies: