SORRY, but I have just got to stop bothering about the all-consuming household budget — but only for a few minutes, mind you, because that is all I can spare from the search for $550 in carbon tax savings.

Tony Abbott’s third ministry deserves closer examination. There has been far too much store placed on the so-called “winners and losers” so far framed around the celebrity personalities, such as they are.

There are other ways to skin this cat. Rather, it is horses for courses so the best runners in wet conditions get to be in the right jobs. That is the theory anyway.

There is not a lot to see in the new Abbott line-up and certainly no breathtaking moves in portfolio rankings. It is more some fiddling down the back-end of the list, where the bottom-feeders scrap.

The top seven portfolios were untouched other than a new face or two in the junior jobs while the next two down, Pyne and Macfarlane, got changes of title to add words like “Training” and “Science, thereby dealing with two of the smallest barnacles.

All this means is that there will be some public servants reporting to new big bosses and some different ministers, or the same ministers talking about new topics, popping up by the end of January — other than Scott Morrison fast out of the blocks on the case of his new enemies from Day One.

Machinery of government changes, as they are called, get bedded down very quickly in Canberra, even if they occur four days before Christmas and more than a few people are not going to get much of a holiday. The public workforce is flexible and very good at this sort of thing, contrary to the myths pedalled about it.

Shame on Abbott for spruiking Senator David Johnston in Defence as capable, trusted, on Team Australia and so on, and then moving him out. Loyalty and that first rule of being a minister: “cause no trouble, ruffle no feathers and do as you are told” obviously counts for much with the PM and, no doubt, Peta Credlin.

We know this because Arthur Sinodinos was retained on the books for nearly a year when he should have been dropped immediately. Abbott also held open a place in Cabinet for his special chum going back to republic referendum days, Sophie Mirabella, in the hope she could scrape into her seat, long after it was prudent to do so.

Four things about the portfolio rankings in Abbott’s new ministry stand out. 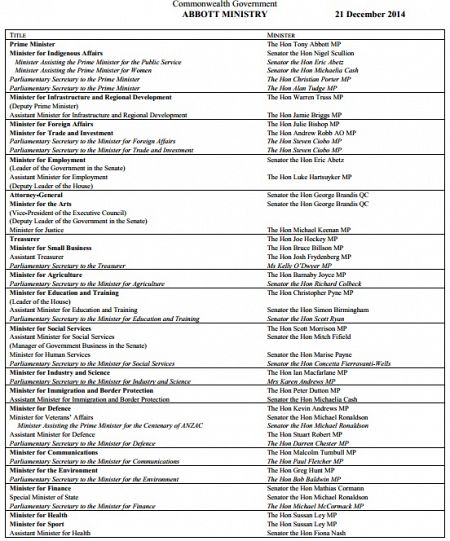 Firstly, the important health portfolio is in last place at number 16, with a brand new female minister — Sussan Ley*. Both she and Fiona Nash, however capable, are languishing at the end of the table.

What do they say: “Put women in jobs where there are unpopular decisions to be made”? Thought so. Ley, of course, has copped the unforgiving assault on Medicare and co-payment debacle.

We won’t see much of her on TV as the frontbench seating is also dictated by Cabinet ranking. Only the first among equals get to sit behind the Prime Minister in Question Time.

When the chips are down, there is not much money to throw around and the finance minister is hovering, you want to be as high up on the ministry list as possible. That is when your ranking in the Cabinet pecking order really counts. Good luck to health and sport.

Secondly, environment remains stuck at 14. This job is much too important to be left cellar-dwelling but, yes, we’ve got the drill and it is Direct Action. If there was ever an economically important portfolio, it is this one. Greg Hunt should be on Expenditure Review Committee (ERC).

But Scott Morrison now in social services at number nine got the nod for ERC and will have a finger in the pie of every decision about the budget. Looks like he’s being groomed for the top job if you asked me, but no one will because I am fittingly consumed by the homefront finances.

If Julie Bishop is going to be able to seriously challenge Abbott for the PM’s job, she would have wanted a move like the one Morrison got. It is hard to be taken as a serious player in Cabinet and have a high domestic profile if you are hardly ever around.

What is new is to have the social services minister as a permanent member of ERC. To have a junior minister in Assistant Treasurer Josh Frydenberg also a member is unheard of. That move is clearly a warning shot across Joe Hockey’s bows.

Frydenberg may have the gift of the glib and is said to be on Team Morrison but is mostly an ideology-driven motormouth.

They have a smart answer for everything, don’t listen and talk too fast. Kelly O’Dwyer also needs to watch this habit.

Lastly, the important communications job headed two places south from Number 11 to 13, taking Malcolm Turnbull with it. This tells us something is on the slide ... Malcolm, probably.

For all the talk about Scott Morrison’s “promotion”, the social services portfolio has only moved from up one place from 10 to 9, swopping spots with industry and science.

Peter Dutton must be an Abbott favourite. He moved from health at number 12 to immigration and border protection at 11 — work that one out. Dutton’s elevation to the National Security Committee should be setting off alarm bells. We need smart brains and cool heads on there.

Finance creeps off last spot from 16 to 15, also moving Matthias Cormann up one place. As finance minister, Labor’s Lindsay Tanner was number four in the Rudd ministry. How things change.

While it was notable that the Cabinet representation of women doubled from one to two and we now have a permanent female presence at the table to cover Julie Bishop’s absences, it is equally notable that no women but two men were made assistant ministers, the stepping stones to Cabinet.

The two new women, Kelly O’Dwyer and Karen Andrews, only got to Parliamentary Secretary so will be stuck answering correspondence and doing little, low profile tasks that the real Ministers cannot be bothered with. There is not much chance to shine in one of these jobs that have little input to policy direction and decisions.

Simon Birmingham, a senator from South Australia, moved to assistant minister in education and training. He is a republican, being one of only two ministerial appointees not to pledge allegiance to the Queen of Australia in Abbott’s first ministry, preferring the oath of allegiance to Australia, as did Human Services Minister Marise Payne.

Two out of 42 thus far was not much of a show for the country to put it mildly. At time of writing, it is not clear which option the two newbies chose at the 23 December swearing-in but, whichever way they went, it is not going to make much difference to advancing our government.

That brings me to the subject of the representatives for women, still the Prime Minister himself and sidekick, Minister Assisting Senator Michaelia Cash — not in Cabinet and who has had little impact in this role. Publicly, she’s well-tethered.

Abbott could have followed his “bro” Stephen Harper in Canada and appointed women to nearly one third of an impressive cross-section of a ministry. But no, not enough merit can be found. Antennae should start jangling as soon as any (conservative) man starts talking about women and merit in the same breath.

In fact, the best thing that the PM could have done for women this year, given no sweeping gestures Harper-style could ever have been contemplated, would have been to command all his male Ministers to wear ties of any colour other than blue, follow his own diktat and then get rid of the speedos. Peta Credlin really needs to do a good throw-out of all the polyester horrors Abbott routinely turns out in.

Still defying Gillard, in her face and ours, after all this time. It is a pathetic badge of honour.

* In a previous version of this article we incorrectly identified Sussan Ley as a Nationals member.

Sarah Brasch is the National Convenor of Women for an Australian Republic.