The Abbott Government has busted the half ton. That is, 50 broken commitments in ten months. Five per month. That makes it almost certainly the worst regime for policy delivery in modern history — anywhere.

If Abbott’s strategists had hoped Australia’s mainstream media would all pretend not to notice, they are now bitterly disappointed. Public broadcaster the ABC has just joined the campaign to document the broken promises which Independent Australia began last November.

More about the ABC shortly.

First, let’s update the tally with the latest batch:

Minister for Indigenous Affairs Nigel Scullion promised in May that front line services for Aboriginal people would not be reduced, despite savage cuts to overall Indigenous funding in the budget.

In July, the strategic $500,000 a year Prisoner ThroughCare program run by the NSW and ACT Aboriginal Legal Service was terminated.

Before the election, Abbott affirmed support for the bipartisan greenhouse emissions reduction target of between 5% and 25% of 2000 levels by 2020.

In November, Abbott softened that commitment:

“Australia will meet our 5% emissions reduction target, but this government has made no commitments to go further than that.”

‘If the Coalition is elected, no-one who arrives illegally by boat will receive permanent residency.’

This was the clear – and frequent – written and spoken commitment by Abbott’s frontbenchers.

That was broken in July with the decision to apply ministerial discretion to residency and with at least one Ethiopian refugee now settled permanently in Australia.

In his campaign launch speech, Abbott promised to

As the ABC’s promise checkers show, this commitment was broken in July.

Before the 2013 election, Joe Hockey specified a dramatic reduction of $4.5 billion in Australia’s overseas aid allocations over the forward estimates.

The May budget actually cut aid by a brutal and inexcusable $7.9 billion.

“There are no plans to increase the fuel excise.”

Five weeks later, on 8 May, the excise went up.

Tony Abbott -"There Are No Broken Promises" We shall not forget RIP ~> Here lies Tony Abbott’s political career http://t.co/9dWtJqeaSw

“We’re going to do no more and no less than we promised people at the election. The only privatisation that we’ve got slated is Medibank Private.”

Since then the government has commenced scoping studies to sell off the Royal Australian Mint and the Australian Securities and Investments Commission's business registry arm.

The Coalition promised before the election:

That was abandoned in December.

“... give Landcare significantly greater access to the Caring for Country pool of funds, as well as the current Landcare funding.”

Abbott and Joe Hockey were adamant before the election that

“... the only party that will raise taxes after the election is the Labor Party.”

Taxes to have increased since then, besides the fuel tax, include the budget repair levy and the GP visit co-payment. With no offsetting rate cuts, bracket creep will increase taxes further.

They are the latest ten, bringing our total to 50. The first 13 were documented here in November, the next 12 here in February and the following 15 here in May.

While the ABC’s late endeavours in tracking promises are most welcome, early signs that they will be thorough rather than superficial are not... er... promising. 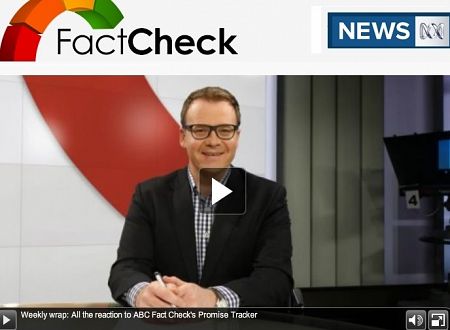 The ABC reported on Thursday that

‘ABC Fact Check has launched a Promise Tracker, which follows more than 60 promises made by the Coalition in the lead up to the 2013 federal election.’

Hmmm. Only just over 60? So how were they chosen from the hundreds made?

‘Ten months into the Government's term, it reveals 12 promises are delivered, six are broken, four are stalled and the majority remain in progress.’

Six broken? Really? Why have only six broken promises been explored when fifty have been fully documented by several online publications? These include Independent Australia [refer above], The Monthly, Crikey, The AIM Network and The Guardian.

Is this because the ABC is hog-tied by its charter which demands even-handedness, and therefore must report equal numbers of infractions for each side in politics, regardless of the ratio of actual offences?

Will the ABC continue to show more promises kept than broken and thus bolster claims by the Institute of Public Affairs in The Drum that broken promises don’t really matter much?

We shall onpass this series of articles – with embedded links to verification of our claims – and see what eventuates.

Regarding the prime offender, Tony Abbott, will he reach a century before the next election?

Or will he be replaced as PM before then so the counter can be reset?

'I do not break promises' says Abbott. Hmmm. http://t.co/dnIrDV4PAV #insiders 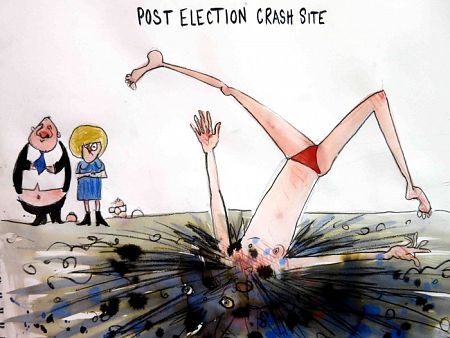 @davrosz I felt sick listening to that part of his speech