SUBSCRIBE   DONATE LOGIN SHOP
SUBSCRIBE   DONATE
How we prevented a Morrison dictatorship
How Howard screwed the Libs
U.S. site tries to ruin what makes fairy bread great
Bloody Idiot of the Week — Episode 28: Get used to it
Morrison's 'politics of retribution'
Investigations

A strange journey to Jacksonville

By Peter Wicks | 6 June 2012, 11:20am | comments |
Investigative blogger Peter Wicks responds to Kathy Jackson’s latest attempts, yesterday in The Australian, to smear his reputation and smokescreen the facts. 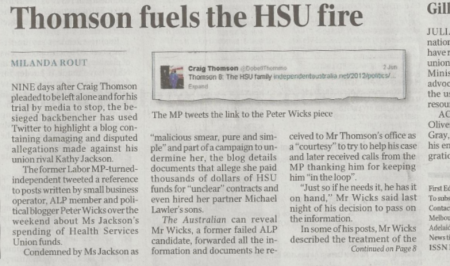 On the front page of yesterday's The Australian

Well, yesterday was a first…

It’s not an average day you are mentioned in The Australian, let alone on the front page.

But, then again, it’s not every day that facts presented by a part-time blogger, published on an online news source, upset the strategy of a so-called union “whistleblower’ and her partner — who is the second highest ranking industrial judge in the land.

One might wonder what this apparent powerhouse couple would have to worry about. After all, I am just a lowly blogger, and they are a power couple with all the might of seemingly every Liberal party connected law firm behind them working for them for free.

Of course, after hearing about Jackson’s chaotic, controversial and perhaps even criminal, day in court yesterday, I think we can all establish quite easily that she has plenty to worry about.

So, let’s have a look at the article in yesterday’s Australian, under the headline “Thomson Fuels The Fire”, by Milanda Rout.

The story appeared after Craig Thomson tweeted a link to an article I wrote for Independent Australia — which is, until now, the only news source I am aware of to mention any of these documents or ask any tough questions of Ms Jackson.

Jackson’s comment, about Craig Thomson tweeting a link and then comparing it to Thomson’s plea for calm from the media, is so out of touch it borders on being offensive.

“I find it particularly ironic that Mr Craig ‘Just Leave Me Alone’ Thomson is tweeting that malicious material. Clearly, one of the many qualities he lacks is a sense of hypocrisy.”


I find it delusional in the extreme to compare the clicking of a mouse button twice by Thomson to the more than two years of media harassment of Thomson, his family and staff.

I hope someone has informed Jackson, for example, that the sending of a tweet does not at all compare to a television reporter lurking outside your bathroom window while your pregnant wife showers. 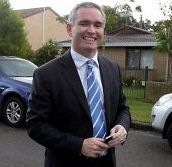 
It would be a strange place where those two events would compare; I will refer to this place from now on as “Jacksonville”.

Jackson refers to me as a “failed ALP candidate” often — it’s a neat throwaway line that would make a nice sound-bite, if required.

Some would say this is true; I wouldn’t, but some would — and they would be correct. You see, it all depends on your perspective — and your definition of "failed".

I ran for the State seat of Hawkesbury in the 2011 NSW election. I was defeated by the Liberal candidate in a convincing fashion — that much is certain.

However, the seat of Hawkesbury is the safest Liberal seat in NSW, and the backlash against the ALP that year was huge. If I was to say I didn’t expect to win, it would be understating the situation — I knew it was an unwinnable seat.

The branch that I am a member of asked me to stand for the seat and I accepted. In my view, there are thousands of Labor voters in the electorate who deserve a voice. In my area, we call it “taking one for the team” and we do it proudly. In contrast, in “Jacksonville” speaking out for others is clearly a sign of failure. A strange attitude for a union official, I would have thought.

Only in a place like “Jacksonville” would someone like Kathy call me a failed ALP candidate. After all, this is the woman who tried to win pre-selection to become an ALP candidate in Victoria, and lost. Then, just for another shot at humiliation, Jackson took the ALP to court to try to overturn the election result, but alas she lost once again.

Does that make Jackson a failed ALP “would be” candidate?

I believe I have mentioned the pot and kettle before…

Jackson, once again, alleges I am part of a Williamson “conspiracy” — and now throws in Peter Mylan as well for good measure. Once again, I will state for the record that neither I, nor the editor of Independent Australia, David Donovan, have ever met, spoken to, or had any form of correspondence or contact with either of these two men.

Next week I am half expecting Elvis to make an appearance in Jackson’s theories, as they are getting wilder all the time. Maybe Elvis is currently touring Jacksonville?

As for the evidence that Independent Australia has posted, over the eight articles on this matter, Jackson tries to explain how these documents were uncovered.

“As I will show in court, both have gone to a lot of trouble to secure them all and then have them scoured to find anything at all that can be spun or misrepresented as evidence of wrongdoing.”

As I explained from the start, I have a source inside the HSU who came to me with the initial material. I did not seek it out at all. The rest of the documents have been sent to me from other reliable sources, who have approached me after the first articles were published.

In fact, it is safe to say that posting these articles has opened up a floodgate of information for people whose sole aim, it appears, it to take back control of the Union from Jackson.

The most trouble I have gone to in order to receive these documents is to meet a friend for coffee. As for the rest of the documentation, all I have done is check my inbox.

In “Jacksonville” that may be regarded as “a lot of trouble”, where I’m from, it’s often referred to as a breeze…

Facts have no bias, and we have gone to considerable trouble checking each document’s authenticity and then looking into the background of each. As I have said before, there is much information we have received, but can’t verify, that has not been published.

It is very noticeable that we have received a lot of information about wrongdoing by Jackson, but none at all about any by Craig Thomson. It makes you think.

Jackson also describes the documents uncovered as “malicious”. She then goes on to try to explain some of them, particularly those regarding her employment of two of Michael Lawler’s children, thus admitting their authenticity.

Interestingly, many of our “malicious” documents appear to include Jackson’s signature.


The payment to Numbat Consulting of $134,524, mentioned in the article, still remains unexplained as far as I am concerned. Both myself, and Independent Australia received an email from Kerren Clark saying that the post was inaccurate.

Kerren, who it seems attended Monash University with Jackson, told us a couple of interesting things, one of which is mentioned in Rout’s article.

“Although I have written many articles for HSU newsletters, these do not appear over my name. I just get on with the job and let somebody else have the credit.”

I thought this statement odd, as it kind of backs up the theory that nobody knew what roles they performed — it even seems much of the alleged work was done under other people’s names? Very strange.

“I am willing and able to produce my records to police or administrators but I refuse to be embroiled in internecine warfare."

The article was regarding Numbat’s refusal to co-operate with the acting General Secretary, Peter Mylan’s request for information as to the services provided by Numbat. The email sent to us seems to confirm that, saying she will only produce records for police or administrators. Also strange that she would mention administrators…

Yes, we were asked to take that down on the basis that it was wrong, however we refused as all the information is clearly correct.

In further emails to us, Kerren Clark agrees that this is the case.

Only in “Jacksonville” would someone ask something to be taken down as incorrect via email and then confirm its accuracy in the same email.

I spoke to The Australian’s Milanda Rout briefly on Monday afternoon regarding her piece, before it was published, and she seemed to be interested in doing a fair and balanced article.

Whilst I am not thrilled about some of the article seeming to portray Jackson’s version of events in a more favourable light than my own — after talking to Rout, I remain confident that, as a professional, Milanda will look into some of the documentation provided in the interests of seeking the truth for her readers. I also sincerely thank her for being one of the first in the mainstream media to look into this story.

Some of you may be surprised that I have not done a Murdoch / News Ltd bashing post. On the contrary, I thank Milanda for taking the trouble to contact me for my comments.

I will leave the cheap shots to those at Crikey, who do not first contact those they write about.

I would also, once again, like to thank Kathy Jackson. By continuing down her arrogant and predictable path of shooting the messenger, and smearing the source rather than explaining the facts and answering the questions, you highlight our credibility, and continue to fuel our fire. 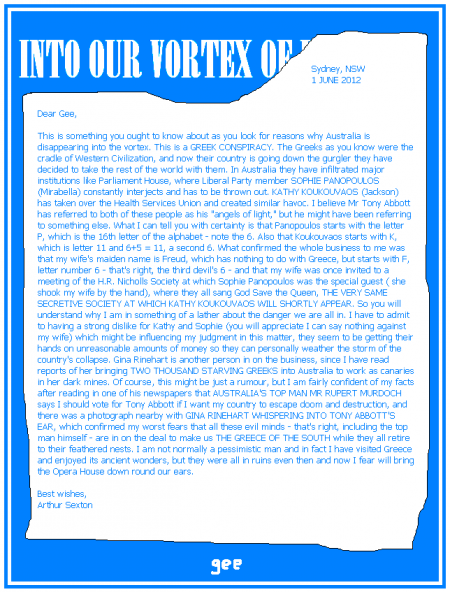