Yesterday's Trade Union Royal Commission (TURC) experience was not vastly more exciting than Monday's — though it produced some revealing evidence that may become very relevant when the Kathy Jackson appears. Peter Wicks from Wixxyleaks reports.

Monday’s TURC hearings were apparently supposed to be the free kick given to the Kathy Jackson/ Marco Bolano faction against Bolano's factional rival Diana Asmar. Yesterday was supposed to be the Royal Commission going for the jugular on Team Bolano’s behalf.

One almost felt a touch of sympathy for Counsel Assisting Jeremy Stoljar, as it was quite clear that he was struggling against a canny witness who was not going to be tricked into saying anything stupid. Kitching denied all of the allegations made against her on Monday regarding right of entry exams and claims of bullying. Kitching went further to say that the claims against her were politically motivated, despite witnesses testifying the previous day that they had no political or factional interests. Despite his best efforts Stoljar could not make anything stick and it was clear that he was frustrated at having nothing to work with in terms of evidence.

The Commissioner stepped in at one point and asked Kitching not to speak over Stoljar, although Stoljar had often interrupted Kitching when her answers weren’t what he was hoping for.

Next up came Diana Asmar who was not as fiery as Kitching, but then again she didn’t need to be. Once again nothing seemed to stick as the allegations against her were backed up by nothing, just the testimony of those who had openly admitted to lying about the same subject previously and had even signed documents that they now claim to have done falsely.

Stoljar launched a fishing expedition on campaign funding and campaign material, although that fishing trip didn’t produce a nibble, let alone a bite. Then there was the talk of staff turnover, and it is fair to say that there was a distinct lack of surprise when Asmar confirmed the staff turnover, as that is what happens when a new management team take over — they want their own people, just as the members voted the old team out.

Lastly, there was a desperate bid to make out that wages were dramatically increased under the Union's leadership, however it emerged that the wages for these positions were set by the Federal Court appointed administrator and had nothing to do with the new management.

But it was when Kitching and Asmar’s lawyer Remy Van de Wiel QC had his chance to ask questions that things really fell apart for Team Bolano.

Monday had been about making allegations against Kitching and Asmar, supported by conversations nobody else had heard and emails of which nobody had a copy. Yesterday, Kitching and Asmar were in a position to refute those claims backed by volumes of documentation including meeting minutes, emails, and correspondence. The documents that those who appeared on Monday had denied existed were produced and entered into evidence.

This documentation included a pile of written complaints from a large volume of people whom Jayne Govan had dealt with and which had led to her dismissal, rather than it being – as alleged – for no reason at all. It was also highlighted that all these complaints had been sent to Robert McCubbin, who had neglected to mention this when claiming Govan was bullied.

Pi ki 'Peggy' Lee’s testimony that she was not politically or factionally motivated came unstuck with evidence of emails emerged that she was still supporting Bolano’s factional members, sending them information whilst Asmar was secretary.

Claims Monday of bullying were refuted by minutes of Branch Committee of Management (BCOM) meetings, as were claims that Flynn had not been allowed access to union bank accounts.

Asmar was also able to point to the mess that they inherited when they entered the branch office that was previously home to Marco Bolano and Kathy Jackson of the number 3 Branch.

Asmar told of bags of shredded documentation that had to be handed over to police. 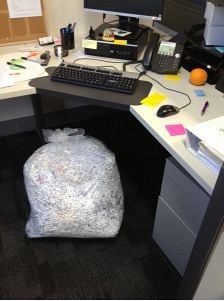 There were also large numbers of documents that had been torn up in an attempt to destroy them, some of these were able to be pieced together like a jigsaw puzzle, as picture in the document linked below show. These documents have apparently been handed over to Victorian Police.

Some of the documents were only partially retrieved, as shown in the pictures below. 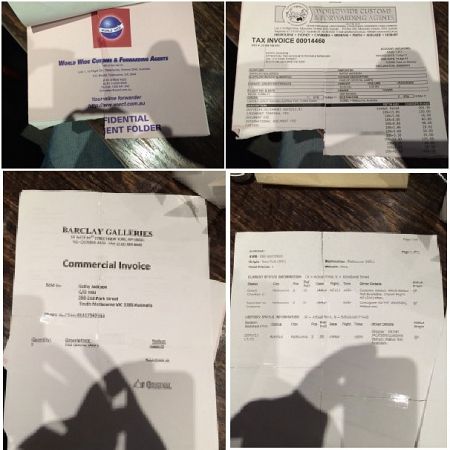 Remember, this is the type of documentation that Kathy Jackson had tried to say was washed away or destroyed by the flood of great convenience. If these are meant to have been some of the flood damaged documents then this clever flood seems to have torn these documents and not given them any water damage.

The documents show the purchase of two lamps from New York for US$1800: 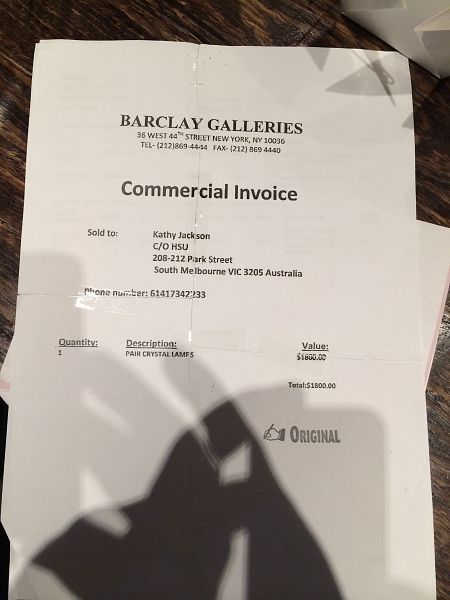 And another for substantial shipping costs back to Melbourne: 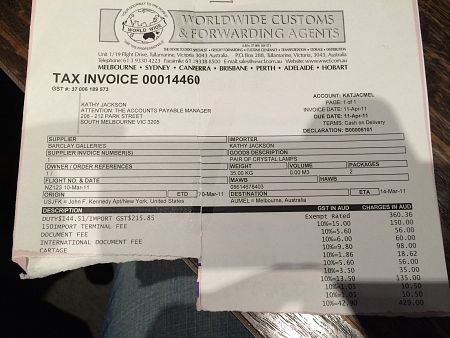 I’m sure members felt a glow from this pricey lighting that had to be freighted over from America — so why the need to tear up the receipt and freight documentation?

After lunch, the current NSW HSU secretary Gerard Hayes took to the stand.

Hayes is the man who Kathy Jackson disciple Katrina Hart has been slinging mud at for years, and yesterday none of that mud stuck. Hayes was relaxed and calm on the stand — and it is no wonder, there seemed no substance to any of the claims against him.

The interesting part came when recordings from Strikeforce Carnarvon phone taps were played.

The recordings are here, here and here and I should add a language warning.

At the end of the last one, you can hear Hayes on the witness stand say:

At time of publication Jeff Jackson is appearing before the Commission. With Kathy Jackson also appearing this week, the next few days promise to be interesting.

See transcripts of yesterday's TURC hearing here. You can watch TURC live online here. Follow Peter Wicks on Twitter @madwixxy. Watch Peter speak to Scott Clarke about TURC and Kathy Jackson below on Youtube , or download the podcast of this interview here.