What was the deal Kathy Jackson’s lawyer alleges the Trade Union Royal Commission made with her before she gave evidence — and why did they? Pete Wicks from Wixxyleaks wonders who's pulling the strings.

A ROYAL COMMISSION into anything is an expensive exercise for the taxpayer and, with the government cutting back on spending, increasing taxes on things like petrol and seeking to create a GP co-payment for doctor visits, any Royal Commission has to demonstrate it is manifestly in the public’s interest.

It is absolutely critical a Royal Commission process be seen to be above politics and to have the highest level of integrity.

The current Trade Union Royal Commission is no different. At an estimated cost of $61 million to the taxpayer, the public need to be assured that this is not just a political witch-hunt they are footing the bill for and that the integrity of the Royal Commission is upheld.

Unfortunately the Trade Union Royal Commission has failed in this regard.

However, what was revealed on Friday in the ‘Written Submissions On Behalf Of Katherine Jackson’ has, in my mind, sent the Commission’s integrity levels plunging to depths a deep-sea diver could only marvel at.

During the Royal Commission hearings into the HSU, many in the public commented on the soft treatment on the witness stand of the Kathy Jackson allies. They also commented on the stark difference in the tone of questioning from Counsel Assisting Jeremy Stoljar when the current HSU Branch 3 Secretary Craig McGregor took the stand with allegations against Kathy Jackson.

Some may remember in an earlier article I recalled hopping in the lift with members of the mainstream press after McGregor left the witness stand, where one member of the press uttered:

On Friday, in the Submission to the Royal Commission from Jackson’s Solicitor Philip Beazley, we learnt more about this apparent “fix”.

https://t.co/OCjyqQy2uj. "Why would a deal be done to go soft on Jackson and, if so, under whose authority?George Brandis, perhaps?"

As I earlier reported, the submission states:

‘Counsel Assisting initially foreshadowed a thematic approach to the hearings involving Ms Jackson. That initial plan, however, was not adhered to.’ 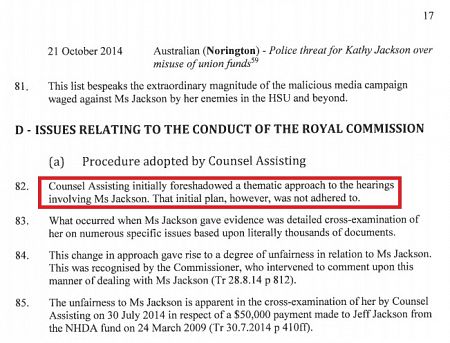 It would also appear that there is a suggestion Commissioner Dyson Heydon was aware of a deal being done with Jackson, as the submission also states:

‘This change in approach gave rise to a degree of unfairness in relation to Ms Jackson. This was recognised by the Commissioner, who intervened to comment upon this manner of dealing with Ms Jackson.’

There were many who strongly suspected that a deal had been done with Jackson prior to the Commission hearings commencing and a “fix” organised, that meant a “go soft” approach towards Jackson and a harsh approach to those with allegations against her. However, to actually see this alleged deal being referred to in a matter of fact way in a signed submission by a solicitor is another thing altogether. It should also be remembered that the solicitor in question, Philip Beazley, was organised for Jackson by the Commission itself after her claims of being “ambushed”.

The Commission had allocated time to hear witnesses and to look into the numerous allegations against Kathy Jackson. This was to be the interrogation of Jackson that the public and HSU members had been waiting for.

However, based on Beazley’s submission, if it is accurate in this respect, it seems the outcome of the Commission’s hearings into Jackson may have already been determined before they began. That the hearings into the Jackson allegations were nothing more than an expensive show scripted beforehand to give an illusion of justice from a Royal Commission seeking only to vindicate Jackson. In other words, taxpayers were inadvertently funding an attempt to fool them to achieve a goal that appears to be inherently political and personal.

Why was such a deal made? Was there someone ‒ perhaps a senior politician ‒ pulling some strings in the background to “sort things out” for the “heroic whistleblower”?

Based on the submission signed by Philip Beazley, it would appear that despite the deal being agreed before the hearings, the ‘plan … was not adhered to’. Adhered is quite a strong word to use in this instance and it certainly gives the impression that this was a firm commitment agreed to by both parties.

The problem was that although Kathy was given a soft ride on the witness chair, she unwittingly made reference whilst under oath to accessing HSU funds whilst not being an employee of the union. This put Counsel Assisting in an awkward position and saw the Commissioner Interrupt proceedings.

After that, once the news of the NHDA account and Peter Mac hit the mainstream media, the Commission seemed to slip into self-preservation mode and its attitude appeared to change towards Jackson.

This left Jackson, after being called back, left on the witness stand like a deer caught in the headlights, wondering why her prior deal to vindicate her and destroy her accusers had suddenly gone pear-shaped. One can hardly forget the shocked body language of Michael Lawler and Marco Bolano that day: 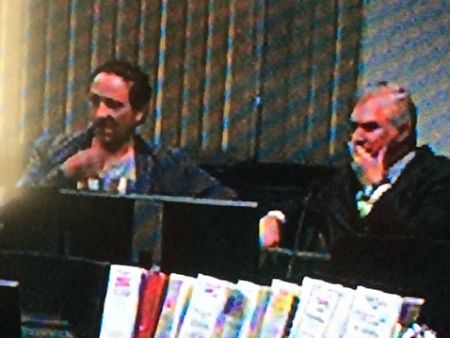 Whether the Submission was written by Philip Beazley, who would not have been present for the discussions before the hearings, Michael Lawler or Ronald McDonald, I’m sure that an allegation like this has shaken the Commission who may have been hoping nobody noticed it.

One thing is for sure — whoever wrote this submission is not in the nation’s brightest 1%, as alleging what would may be seen by many as improper conduct by a Royal Commission probably won’t win Jackson any favours.

Let’s not also forget the matter of the HSU and Kathy Jackson also heavily involves Michael Lawler, whose position as Vice President of the Fair Work Commission seems to become even more compromised every day.

The other important thing to remember is that this is just one witness from one union from one hearing.

If the allegations are true, then it begs the question: how many deals were done with other witnesses? Were deals done, for instance, with the witnesses in the Gillard witch-hunt?

Of all of the things to come out of this Royal Commission, this allegation is by far the most shocking as it could be perceived as a corruption of the legal and justice system at the highest level.

It puts a question mark over everything that has come out of the Royal Commission and also has the potential to further damage a Government already dragged down by the polls.

This matter needs to be looked into as a matter of urgency, as the taxpayer is still spending millions of dollars on this Royal Commission, which was recently extended.

I have contacted the Royal Commission and Counsel Assisting Jeremy Stoljar regarding the allegation but, at the time of publication, have yet to receive a response.

If there is any truth to this allegation, the Commission should be immediately halted and, after Attorney General George Brandis has resigned or been sacked, there should be a full and truly independent inquiry into the entire matter.

After all, allegations of union corruption cannot be resolved by a corrupt legal process.

UPDATE: Peter Wicks received a response from TURC just after the publication of this piece; note below: 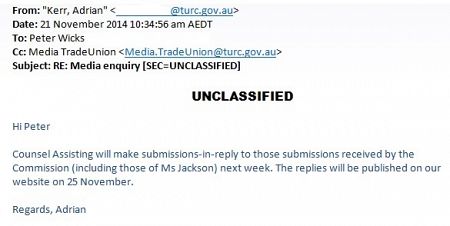