Hoddle Street mass murderer Julian Knight wants a PlayStation in his prison cell; Tess Lawrence says it’s just yet another play for media attention around the anniversary of his brutal crimes.


JULIAN KNIGHT ALREADY HAS A PLAYSTATION ― THE 1987 HODDLE ST MASSACRE

SO, MASS MURDERER Julian Knight wants access to a PlayStation in prison.

This gutless manipulative gamer has already starred in and produced his own real life video game impaled with high impact violence, carnage and cruelty.

It was/is aimed at innocents. Babies, women and men alike; old and young; whoever came/comes into the line of fire.

The storyline is dead simple. It's not a game of skill. More a game of kill. Thrill kill. The victims are always vulnerable civilians.

Not so much PlayStation as PreyStation. 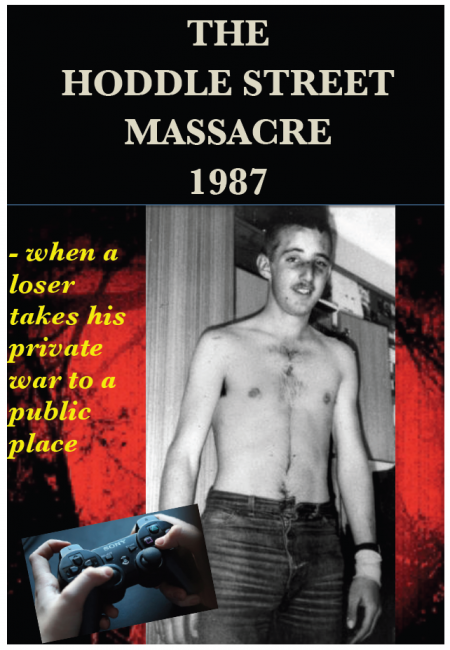 There's this ex-Duntroon cadet loser, who's loaded up with alcohol, hate and a battery of lethal weapons ‒ including two semi-automatic rifles and a pump-action shotgun ‒ who takes his private wars to a public place.

The virtual reality zone is the Melbourne inner suburb village of Clifton Hill, on streets and railways lines just metres from where the loser lives ― so our home-grown terrorist can literally piss on the blood of victims dead and alive in his own backyard.

Greater hate hath no man than he who hates himself.

As the human prey unwittingly drive into view one by one, the gamer guns them down ― just like that, easy peasy. It's always a Sunday night.

And when they jump out of cars to help one another, or flee from the line of fire, the gamer gets a second chance for a kill to ramp up the death count score by going up close to those wounded, but not quite dead, and pumping more bullets into them until they are without life.

All the while, to help gamers get into blood lust mode, virtual sound surround emits screams, sirens, and the hissing noise of compressed air exploding like hot steam from burst bodies, gurgling through the warm blood spurting from mouths, necks, and bullet holes, along with the urine and faeces we humans expel under such duress and when our bodies are shot into and blown open.

Are you getting the gory sickening picture?

Because these are just feeble words that can never accurately portray the unspeakable reality and horror of that massacre and its continuing aftermath upon victims, families and friends, police and ambulance, and all others who attended that long night into day on 9 August 1987.

For some, that long night has never ended. For them, the sun never fully rises. And I'm talking of the living as well.

If one accurately portrayed in a video game what took place during The Hoddle St Massacre 1987, it would probably be on the banned video list in Australia.

Last week in the Victorian Supreme Court, Knight sought leave to bring an action against the State because he has been denied access to a PlayStation. He also wants access to a computer in his cell.

Despite being declared a vexatious litigant, Knight's insatiable narcissism and knowledge of how to manipulate the legal system coincidentally seems to come to the fore in the months close to the massacre's anniversary. This would be deemed a stupid move, in terms of insensitive legal strategy since it invites public wrath. Knight is not stupid.

It appears obvious he craves media attention and notoriety more than he craves a PlayStation or a computer.

So often in our courts, it seems that victims are locked out of public debate and the judicial system.

At times, they are not even considered or mentioned. Little wonder the community angers at   perpetrators exchanging prison garb for the shrouds of victims.

Last year, in the first of a two-part series in Independent Australia, entitled ‘The Dark Knight Rises on the Viagra of Violence’, I wrote:

Consider the implications of Julian Knight in possession of pornographic material in his cell.

He also had racist and neo-Nazi material ― both are staples of video games.

How did Knight get access to all of this?

In the same way that Carl Williams was murdered in prison and his bleeding corpse dragged around the prison floors before being shoved into his cell, after which his murderer and his mate went for a genteel stroll around the scenic prison yard for a spot of country air, a smoke and no doubt a fine and rigorous intellectual discourse on Darwin's Theory of Evolution and the Survival of the Fittest.

Draw your own conclusions.

We can argue as a community that there should be humane levels of both punitive and redemptive aspects in prison.

And there is an arguable case for allowing prisoners access to pornography. But what type of pornography and should every prisoner have access to it?

We know that those who are addicted to pornography and who cannot function sexually without it, become inured after a time and require more extreme pornography to get arousal; and that inevitably means viewing more violence and violation ― often using non-consenters.

Peer to Peer traffic invariably evades detection and is too voluminous to monitor, even if the collective will was there by our national and international agencies.

Good people within these agencies are often eclipsed by those who are corrupt.

This stuff generates mega bucks that exceed anything our mining industries generate.

And there's no carbon tax to pay.

They do the same (some) with drugs.

He's not the only prison warden that has told me of these activities. Everyone knows it happens.

Only you, the public, aren't told.

We have every right to know what's going on.

As I wrote in Part Two of the series on Knight:

I am no psychologist, and have not seen Knight in person for decades, but some of those who have attest that he continues to relish the notoriety his cowardly murders have brought to his prison door.

To say he is self-obsessed is an understatement.

When being interviewed about Knight by Fran Kelly’s on ABC Breakfast (Radio National) in 2007, on the anniversary of the massacre, I remained mindful of the continued hurting of our community.

This is how Fran Kelly introduced the segment [IA  emphasis]:


Nineteen-year-old Julian Knight was jailed for life in 1988 for his part in Melbourne's Hoddle Street massacre, with a minimum of 27 years to be served.

The former Duntroon cadet was reportedly fascinated with guns and all things military at school.

He has since used a number of legal and other ploys to draw attention to his story, including attempts to write letters of apology to his victims. In 2004, he was declared a vexatious litigant by the Victorian justice system.

One person who has kept a close eye on Julian Knight is Tess Lawrence, a journalist and now a specialist in crisis management.

She was one of very few journalists who have interviewed Julian Knight. She did so face-to-face in a series of personal visits in Pentridge Prison in 1987.

She published a very controversial article in the Good Weekend in 1988 and she's kept a watching brief on Knight since.

And Knight watches the watchers. More intently than we watch him.

Many of those affected by Knight's massacre continue to endure a life sentence of mental and physical anguish in a prison without walls from which there is no escape.