Vivian Bullwinkel, the Bangka Island massacre and the guilt of the survivor 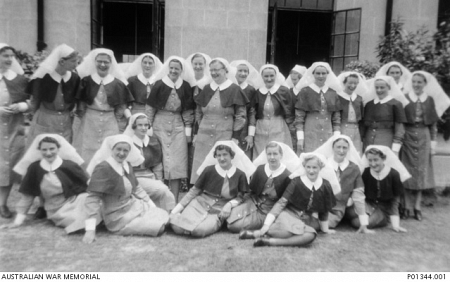 Raped and murdered, all bar one — and she wasn't permitted to tell the full horrific tale (Image via awm.gov.au)

NURSE VIVIAN BULLWINKEL'S survivor guilt gnawed at her brain and heart even more than the Japanese bullet that shot right through her body.

How does one dress such an invisible wound? Where is the bandage that can bind a broken heart?

Where is the key that will lock away memories and tame the unwelcome and haunting flashbacks of the horrors she witnessed and experienced?

How can one unsee such inhumanity. How can the brain unthink it?

The post-traumatic stress of the survivor is still not fully understood. It remains difficult to treat.

Different things may work for different people. Or not work at all.

Whilst for some speaking about the actual trauma may be beneficial and therapeutic, for others, recalling and retelling the "incident", whether in public or private, even to oneself, causes such cruel vivid reliving of the horror that further and serious mental injury is sustained.

This week's commemorations of the 75th anniversary of the Malayan Campaign and the Fall of Singapore, and today's 74th anniversary of the first Japanese bombings of Darwin have brought back memories of meeting this sole survivor of the cowardly and notorious massacre by Japanese soldiers of a group of 21 nurses from the Australian Army Nursing Service, and a civilian woman, in the waters just off Radji Beach on Bangka Island, near Indonesia's Sumatra.

The Japanese occupied the island and operated several prisoner of war camps, including at Muntok.

Despite being in their nurses' uniforms, all with the Red Cross emblem on their sleeves, no mercy was shown to the women.

BULLWINKEL COULD TASTE THE BLOOD OF HER SISTER NURSES

They were directed to walk forward into the sea only to be mercilessly gunned down from behind by their captors, who paddled into the Bangka Strait to bayonet to death any women still alive.

Bullwinkel told me the surrounding sea was inked with blood leaking from her own body and that of her companions. She felt she could taste the blood in the water; was swallowing it.

Astonished to find she was still alive despite being shot, Bullwinkel feigned death, trying to float, trying to stay still, trying not to drown. She tried desperately not to cough or vomit. She so wanted to do both. She wanted to live, not die.

A close up of the bullet hole just above the waistband in the front of Vivian Bullwinkel's grey uniform (Image via awm.gov.au)

The nurses had already endured tragedy, as had all the other 181 passengers and 47 crew onboard the Scottish built SS Vyner Brooke (named for the third and last White Rajah of Sarawak) who were evacuated from Singapore on February 12.

The next day, not long after it had crossed into the Bangka Strait and on a flat sea, the steamer was bombed by Japanese aircraft, taking just under half an hour to sink.

Later, whilst at the Muntok prison camp, Bullwinkel and the other nurses kept quiet about her sole survival of that particular massacre (there were several) otherwise it would have meant certain death for her.

But all agreed that those who survived this hell to make it back home, would cherish and keep alive the memories of those who had been murdered.

Bullwinkel herself felt an onerous responsibility on several levels as a sole survivor. Firstly, to give their families and friends every snippet of information she could to honour her dead sisters.

She was unstinting in this.

Secondly, to give an official account to the authorities — and to the world, so that these war crimes would not go unnoticed even if not punished.

She went on to testify to the International Military Tribunal for the Far East, convened in Tokyo in 1946. The tribunal was a less than honest affair and was ' adjourned ' in 1948.

The Americans did not want to overly antagonise Japan and jeopardise political, strategic and economic opportunities. The Wikipedia account gives a more accurate picture than some official histories.

The bullying and belligerent influence of the infamous General Douglas MacArthur, who would have been a dead cert for a job in President Trump's administration had be lived in less interesting times, saw that at least he – if not the United States – got its way.

Each time Bullwinkel exhumed her memories about the massacre, she willingly tore out another piece of her heart – exacerbating her own recovery.  She never begrudged a second of it.  She felt it was her vocation. That she was allowed to live so that she could be a messenger.

She told the truth, but not the whole truth about events leading up to the massacre. She didn't lie.

I met Vivian Bullwinkel in Melbourne on several occasions, at least twice at the now defunct Naval and Military Club in Little Collins St, that once entertained Earl Mountbatten and whose presidents boasted General John Monash and Field Marshall Thomas Blamey.

We mused about the different course her life may have taken, if she didn't have flat feet and hadn't been rejected by the Royal Australian Air Force.

I can't recall if it was there or at the nearby Windsor Hotel when she told me in confidence about two things she was keeping secret for the time being – but said there would be a time when she would speak publicly about both.

She was tortured by these secrets and her sense of justice was offended by keeping them locked in.

Vivian and her Mum, Eva, enjoying a drink, safe at home at last (Image via awm.gov.au)

BEFORE THE MASSACRE ON BANGKA ISLAND, JAPANESE RAPED NURSES

The first matter was that she confirmed the ill-kept secret that most “of us” – meaning she and the women who had been gunned down – had been "violated" by the Japanese soldiers beforehand.

The second matter related to this violation and it more than irked her. It caused her great mental and emotional anguish and distress.

BULLWINKEL ORDERED BY GOVERNMENT NOT TO SAY ANYTHING ABOUT RAPES

She wanted to put this in her statement before the war crimes tribunal but was ordered not to by the Australian Government.

This is yet another outrageous example of the merging of political and military expediency concerning rape as a weapon of war and rape as the recreational right of militia, sanctioned by nation states and warmongers.

Japan's longstanding denials and relunctance to concede the wholesale rape of prisoners of war and even the existence of so-called "comfort women" has, in fact, been further nurtured through the decades by the reluctance of countries, including Australia, to back up calls for justice and to hold Japan's Government to account.

Remember the anger, propaganda and denials when the Reverend Bill Crews featured the memorial dedicated to comfort women, at his Ashfield Uniting Church?

Where were our dissenting politicians of all hues when Japan's Prime Minsiter Shinzo Abe was here the other day?  Where is our political courage and sense of justice?

WHY THE DISCOMFORT ABOUT OUR OWN ABUSED COMFORT WOMEN?

Here we surely must salute the courage of Australian Jan Ruff-O'Herne, imprisoned as a "comfort woman" by the Japanese.

At 94 years of age, she is still fighting for justice and acknowledgement not only for the South Korean women, but also women of other nationalities who were kept as sex slaves.

It is often through the persistence of family members that war atrocities are acknowledged, let alone owned by perpetrators.

Consider Fairfax correspondent Jewel Topsfield's moving article about the families honouring nurse Kath Neuss and the other nurses of the 8th Division Australian Imperial Force, gunned down in the massacre.

In what was a voyage of discovery in more ways than one for Kath's nephew, Michael Noyce, Topsfield writes:

When Sister Bullwinkel returned to Australia she contacted all the families of the nurses who died. She conveyed some of their remarkable final words before they were slaughtered. Mr Noyce will read these on Radji beach on Thursday.

Those may well have been the last words uttered by any of her sisters that Vivian Bullwinkel heard that day and that, for her, reverberated through the decades.

TIME TO SCREAM FOR JUSTICE AND THE TRUTH

Bullwinkel went on to have a magnificent nursing career back home in Australia, collecting a swag of honours that I know she graciously and always accepted on behalf of her dead comrades.

Her entry in the Australian War Memorial website is inadequate and the lack of information and detail needs to be addressed.

Ironically, in view of the order "not to squeal" about the rapes at the war crimes tribunal, she was appointed the first female trustee on the Australian War Memorial Council.

It's time to revisit the Bangka Island Massacre. Time for a real investigation.

Time to squeal and scream for justice as well as the truth.

Vivian Bullwinkel testifying at what became known as the Tokyo War Crimes Tribunal – ordered not to mention the rapes. Okay it seems, to mention the war. (Image via The Advertiser)

Don't forget. Subscribe to IA for less than $5 a month.