The best Australian TV in reality 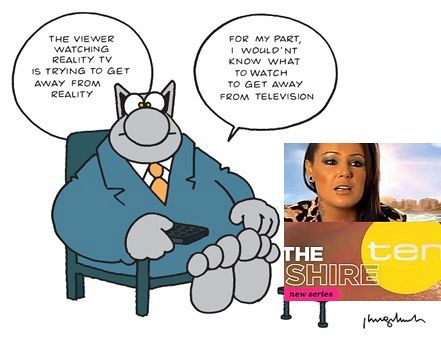 If you’re old enough, you might remember a time before reality TV. In these halcyon days, viewers only had five channels to watch (if they were lucky) and evenings were filled with scripted drama, British comedy and variety shows hosted by Don Lane and Daryl Summers.

The term ‘Reality TV’ itself is a misnomer. Many genre favourites such as The Hills (starring the entirely plastic Heidi Montag and her creepy husband Spencer) are heavily scripted with story arcs planned across twenty two episode seasons. Hysterics are encouraged. Contestants are chosen for their ability to break down in tears at the drop of a hat.

Sutherland Council were apparently seeking legal advice but the show is still going ahead — followed by the sure to be classic...

Have you ever wondered what it was like to be Lara Bingle? If so, this is a show for you.

Come on, you know you love it. The dramatic music. The crying contestants. The constant shots of the MasterChef Clock TM. The hosts, rich in their punning and wordplay. The dishes that you would never in the world want to try cooking at home, until you attempt it and completely fuck it up, almost poisoning your entire family (true story).

Ads for MasterChef this year suggest that it makes people into superstars — which is fine if you consider having a show on SBS makes you a superstar. Other winners (and not-winners, because there are no losers on MasterChef) include Bachelor of the Year Hayden Quinn and three-time cookbook writer Julie Goodwin.

MasterChef isn’t as bitchy as My Kitchen Rules and not as mental as Iron Chef, but it does show you that ordinary people can cook extraordinary things if they’re put under enough pressure. They might also set fire to their hair, so it’s worth watching for that.

2. The Voice (now showing on Channel Nine, and they’re very happy about that thank you very much)

According to the Neilsen TV ratings, over three million people watched The Voice the other night. That’s a lot of people, even when you consider that it means that nineteen million people didn’t watch it. Maybe they were reading the paper, or playing Angry Birds on their iPhones.

What makes The Voice different from every other talent show, you ask? Performances are judged on voice alone (hey, clever title!) while the judges sit with their backs turned, seated in chairs that would make Ming the Merciless feel comfortable. When the judges like the sound of someone’s voice, they hit a big red button, spin around in their chair and jump out of their seat, either dancing on the spot of running over to hug the singer.  It’s all very dramatic, and it’s fortunate that producers managed to find four of the most enthusiastic people on earth or it would all feel very forced.

After spinning around and jumping up and down, judges then have to convince contestants that they should join their team. This led to an unfortunate period where singers chose anyone but Aussie songstress Delta Goodrem, despite the fact that she has had more number one Australian hits than at least two of the judges. She eventually left in disgust, which is commendable — but she eventually came back and met a blind girl, so everything was all right.

That’s right! Big Brother is back, and now it’s on Channel Nine! The network whose ‘current affairs’ show A Current Affair spent hours trashing the early series as mindless trash is now spruiking the new series as Big Event Television and letting you know how you can be a part. That’s right, you!

Previous hosts Gretel Killen (many successful seasons, somehow finding a way to decline in quality) and Kyle and Jackie O (one disastrous season) have been replaced by dancing queen Sonia Kruger. It seems there will be a change in format, so don’t hold your breath for shower cams and night vision dancing doonas. Perverts.

If you’re interested in being a housemate this year, you can still catch the auditions in Sydney (this weekend, April 18th), Hobart and Melbourne. You might also want to take a long hard look at yourself, but that’s just my opinion.

Hosted by quintessential renaissance man Stephen Fry, QI is a quiz show featuring a panel of rotating guests and comedian Alan Davies, who you might know from shows like Jonathan Creek. Often shown completely out of series order, which means that in the space of three hours Fry puts on thirty kilos, gets six haircuts and changes colour twice. All with a refreshing dash of sexual innuendo.

If you’re looking to select a good episode to start with, best guests include David Mitchell, Jimmy Carr, Jo Brand, Phill Jupitus and Ross Noble — who once derailed an entire episode with his insane yet profound ramblings. Needless to say, it was hilarious.