MORRISON: How good is my chicken coop, Mike?!

McCORMACK: Even a good Wagga boy like me hasn’t seen a coop this good. Was it expensive?

MORRISON: A bit on the pricey side.

McCORMACK: No matter — 32 years from now you can look back to today and say, What a bargain I got.

MORRISON: Yeah, good point. Let’s get to the sale. May have some good bargains.

They trot off down the road and start checking the wares on sale.

MORRISON: Wow. How good is this?! One of the best Hawaiian shirts I’ve ever seen.

MORRISON: That’s right. The Boy from Oz. How much for the shirt?

MORRISON: $500?! Really?! For a second hand Hawaiian shirt?! Is it one Peter Allen wore?

VENDOR: Not that I’m aware of.

McCORMACK: Years from now you’ll look back and laugh, A great second hand Hawaiian shirt for only $500!

MORRISON: I suppose, but I bought a brand new Hawaiian shirt, with sharks all over it, for only $10 when I was recently in Hawaii.

McCORMACK: (Quietly to Scott) Ask him who he votes for.

MORRISON: Oh, by the way — who do you vote for?

VENDOR: You guys, of course.

MORRISON: Very good, that’s how good that is. For a fair dinkum Aussie like you, I suppose $500 isn’t too much. Okay. I’ll buy it.

VENDOR: Great! And you’ll be chuffed to know my son is president of the local Young Liberals branch, and he’s organising their next fundraising barbeque.

VENDOR: And I’m donating five per cent of sales today to help pay for the meat.

MORRISON: How good is that?! What is your son’s name? I may know him.

VENDOR: I have two boys. Ron and Tony. They’re both members of the Young Liberals, but Ron is the president.

McCORMACK: Scott, how about this wire? Perfect for your chicken coop.

MORRISON: I don’t really need any, Mike. My coop is brand new. I don’t even have any chickens yet.

McCORMACK: But in time you may need more wire, especially if the local wolves have a crack at your chooks. Imagine, say, 32 years from now, how badly you’ll be in need of new wiring.

MORRISON: Good point. (To the vendor) How much for the wire?

VENDOR: Take it or leave it. Remember, five per cent of all sales are going to directly support the LNP and, in time, you will need to replenish the chicken coop wiring.

While the vendor wraps up the wire, the PM fossicks for more bargains.

MORRISON: Mike. Come and have a look at this.

MORRISON: Have a look at this. What a ripper of a chain saw. How much?

McCORMACK: For a second-hand chain saw like that?! Scott, I’ve got better ones than that back in Wagga — all for less than $200 each.

VENDOR: Scott — err, Prime Minister, think of the opportunity this presents. Governments are accused of thinking purely short term. If you extend your thoughts out for ten to 11 election cycles, say around 32 to 33 years, the span of Jesus’ life on Earth, you’ll be viewed as a visionary.

MORRISON: Mike. He does make a good point there: 32 years from now, $1,200 for a chain saw will look like chicken feed.

McCORMACK: True. And, five per cent is going to help finance the barbeque.

VENDOR: Will that be all?

MORRISON: Yes. That should about do it. I’m not made of money, after all.

McCORMACK: Scott. Have a look at this. Not a bad looking guitar.

MORRISON: Leave it, Mike. A guitar. Come on! What good is a guitar to the economy? Doesn’t compare to the utility of a chain saw.

McCORMACK: Yeah. Reckon you’re right — 30 years from now an old guitar like this one will be completely useless and not worth a cracker. 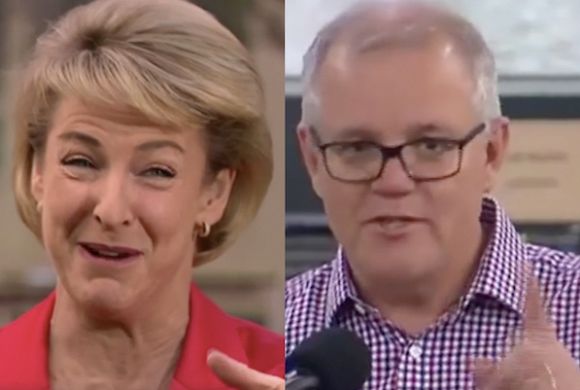 Scott and Michaelia's curry for WA

PM Scott Morrison invites Michaelia Cash to The Lodge in Canberra, to share a curry and plot tactics regarding Western Australia.