Racism did not die with Bill Leak

Bill Leak may have been the poster boy for "free speech" anti-Section 18C nutters, but his death has not heralded the end of racism and bigotry, writes John Passant.

The Australian, the newspaper for which he cartooned, has been one long eulogy for him — complete on the weekend with a wraparound four pages of adulation.

This cult of Bill is driven by The Australian’s campaign against what it calls "political correctness" and what I call human decency. This is centred on Section 18C of the Racial Discrimination Act.

To remind readers, this is Leak's racist cartoon, which The Australian published, last year: 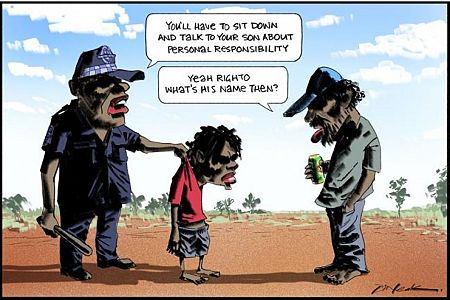 It became a cause célèbre for the reactionary right's false debate about free speech.

It is unlawful for a person to do an act, otherwise than in private, if:

(a) the act is reasonably likely, in all the circumstances, to offend, insult, humiliate or intimidate another person or a group of people; and

(b) the act is done because of the race, colour or national or ethnic origin of the other person or of some or all of the people in the group.

Section 18D makes it even more innocuous. It basically exempts a range of fair comment discussions from 18C. Almost all comments in the mainstream media are exempt under Section 18D.

According to lawyer Michael Bradley in Crikey, Leak’s racist cartoon almost certainly does breach 18C but 18D would exempt him. The complainants dropped their case in November last year.

It wasn’t just Indigenous Australians who were Leak’s targets. He also singled out Muslims, LGBTQI people, the Safe Schools programme and others.

Leak’s death has elevated him to hero status among the "free speech" nutters. The adulation of his racist cartoon and of him under the guise of free speech explains the real target of those praising Leak. It is "the other" — those outside the traditional white racist ruling class stereotype of what is an Australian.

What the reactionaries want from their campaign against Section 18C is the unfettered "right to be a bigot" and to push racist, sexist and Islamophobic ideas even more. Their "freedom" to abuse these targets is already pretty wide. Section 18C and 18D are very weak "protectors" of marginalised groups — or have "limited operation" as Professor George Williams puts it.

The recent Parliamentary Inquiry made no recommendations to change section 18C.

That hasn’t stopped those who want to organise around Islamophobia, racism and racist ideology — the ideology of othering that attempts to shift the blame for the crimes of capitalism onto the victims of capitalism rather than to blame capitalism itself.

To do this, the reactionary section of the ruling class want media voices that push the boundaries of racial hate, sexism and Islamophobia, unhindered by minor inconveniences (to them) of government attempts to protect, however meekly and inadequately, minorities like Muslims, Aboriginal people and LGBQTI people, and majorities like women.

Repealing Section 18C of the Racial Discrimination Act is at the forefront of their crusade to unleash a torrent of racial and other abuse to divert attention away from ongoing and growing inequality in Australia, record low wage growth and the unemployment time bomb. 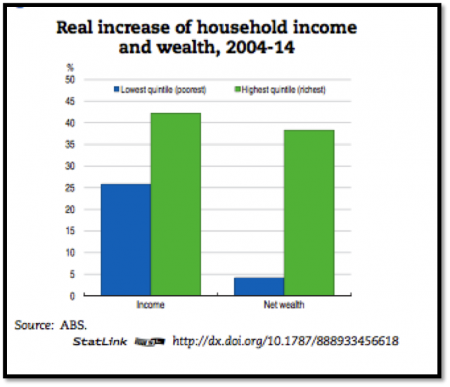 ‘ ... implied light-skinned people who identified as Aboriginal did so for personal gain.'

‘Federal Court Justice Mordecai Bromberg found Bolt had breached the act [sic] because the articles were not written in good faith and contained factual errors.’

So one of the shining lights of the reactionary right in Australia had his wings slightly clipped. Once. It hasn’t stopped Bolt appearing almost daily since then in print and on TV to air his views. (Yes, Murdoch subsidises Bolt in his newspapers and on the Fox TV channel Sky "News".) I have a weekly column in Independent Australia. Mainstream media shuns me. I will leave it up to readers to judge our relative merits.

Bill Leak had free speech for the same reasons as Bolt.

These "free speech" campaigners are remarkably silent on all those laws that do actually silence people.

'I recently examined the statute book to identify other laws that impinge upon democratic rights, including freedom of speech. Disturbingly, I was able to pinpoint 350 laws, most of which have been enacted over recent years. This shows how the self-restraint once exercised by parliamentarians in this area has been lost. It has been replaced with a new permissive approach in which it has become routine to pass laws that undermine freedom of speech.'

Where are the free speech troglodytes on these issues?

We should not pin our hopes on Section 18C stopping racism. It is not just that the section is weak and ineffective. Even if it did stop racist abuse, it would still be ineffective in stopping racism. This is because racism is systemic; it did not die with Bill Leak. To challenge racism we have to challenge the system that produces it.

Some have been celebrating Leak’s death. I am not going to criticise Aboriginal and Torres Strait Islanders and other oppressed people for celebrating the death of one of their oppressors. I would also remind people of the comment of Glenn Greenwald some time ago in relation to the celebrations when Margaret Thatcher died.

In The Guardian, he wrote:

'This demand for respectful silence in the wake of a public figure's death is not just misguided but dangerous. That one should not speak ill of the dead is arguably appropriate when a private person dies, but it is wildly inappropriate for the death of a controversial public figure, particularly one who wielded significant influence and political power.'

However, for me, the main game is defeating racism and its powerful resurgence driven by ruling class political figures like Malcolm Turnbull and his ministers, especially Peter Dutton. It is also driven by the Labor Party when it joins in the demonisation of asylum seekers and their imprisonment in concentration camps here and offshore, and when it supported the racist Northern Territory Intervention. As a consequence, the likes of Pauline Hanson are given the green light to use racism and Islamophobia openly.

Australian capitalism is founded on the indigenocide of Aboriginal and Torres Strait Islander people. Racism is the system’s societal bedrock.

This means that we have to fight othering in all its guises — the racist Northern Territory Intervention, the imprisonment of asylum seekers, the theft of Aboriginal children, the Centrelink robot-debt attacks, the dehumanising of Muslims, the attacks on poorly paid workers and the demonisation of 457 visa workers. The list of those "outsiders" under threat is almost endless.

There is a cartoonist we can celebrate. He cartoons as Eaten Fish. He is an Iranian asylum seeker imprisoned on Australia’s concentration camp on Manus Island. There is no freedom for him. Unlike Andrew Bolt, he has not acted unlawfully. Let’s fight for the freedom of imprisoned cartoonist Eaten Fish and all the refugees and asylum seekers we imprison.

The best way to give Bill Leak the send-off he deserves is to unite and smash the systemic racism, Islamophobia and homophobia he pushed and publicised.

Signed copies of John Passant’s first book of poetry, Songs for the Band Unformed(Ginninderra Press 2016) are available for purchase from the IA store HERE.