Talk of the Town: Puppy factory storm brews in Finley

As Victoria acts to close down the puppy factory industry in Victoria, factory owners are looking to move north into NSW, where the laws are still lax. Peter Wicks reports on one disturbing example.

THERE IS A STORM BREWING in the town of Finley in Southern NSW.

As has been previously reported in The Age, one of Victoria’s largest puppy factories is fleeing north to NSW as Labor prepares to put legislation through parliament to shut down this industry in that state.

On the weekend, I published an article that showed how this move was evidence of a campaign of deception by the leading pet industry lobby group PIAA, who have been shown to be lying to Victorian politicians in a bid to see the publicly supported legislation voted down.

Further queries and investigation has raised serious questions regarding the approval process for the development application. There have also been disturbing allegations made of links to council plans to destroy a war memorial hall against public wishes.

Allegations involving improper procedure, favours done for influence and residents left in the dark may see this matter before the NSW minister for local government, or even referred to ICAC.

The puppy factory hoping to make the move is Banksia Park Puppies, whose owner Matthew Hams is a member of PIAA’s board and who has been lobbying hard to carry on the industry in Victoria.

In NSW, there are weak laws that allow puppy factories to thrive no matter how deplorable conditions. Once a property has had the initial approval from council as a mass breeding facility no further inspections are required to ensure industry standards and animal cruelty laws are being followed. This means that even after being approved for 100 breeding dogs, as he has in this case, someone like Matt Hams can suddenly have 500 dogs on his property until someone discovers this by chance and lodges a formal complaint. Currently, Hams has 150 breeding dogs and has told media of a desire for 300.

Matt Hams and Banksia Park Puppies have not chosen Finley as destination at random. Hams is well aware of the area and the Berrigan Shire Council's shortcomings in regards to matters concerning animal welfare. He is well aware of this because he has a very close contact who lives in Finley. Her name is Pam Edwards and, you may not be surprised to learn, she is a puppy farmer, who operates a short drive from Finley’s town centre.

Pam Edwards has also reportedly been very strong in pushing and supporting the Council’s agenda when it comes to the destruction of the town's War Memorial Hall. The War Memorial Hall is much-loved by the local community and it also has obvious connections to many in the community, who have members of their family who lost their lives in our countries defence.

One close associate and ally of Edwards is Ross Whittaker, who has been extremely heavily involved in efforts to tear down the hall. One wonders why he has taken such a personal interest it the sites redevelopment.

In a bid to find out what was really going on with the concern around the council approval of the development application linked below, I sent an email to Berrigan Council general manager Rowan Perkins, another to Mayor Bernard Curtin, as well as to every current councillor seeking to find out who was across the matter. 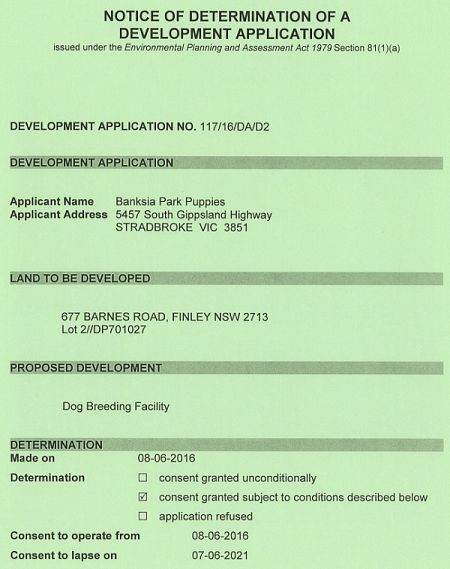 For those voting in the Council elections this weekend, you may be interested to know that not a single one of the current councillors responded. Perhaps a fresh batch is needed?

I asked Council GM Rowan Perkins a number of questions and asked for documentation on a several key points.

Perkins did not respond himself, however I did receive a response via Laurie Stevens, Berrigan Councils development manager.

There were elements of my email that Council refused to respond to and there was documentation they failed to provide or acknowledge.

Some of those queries I made are below quoted below in red:

'I have spoken to locals in the area who are not happy with the prospect of a puppy factory in the area for all kinds of legitimate reasons. None of these locals were aware of the development application and all I spoke to would have protested it. I am also aware that the development application was not advertised in local media in the usual and legal manner, hence why locals knew nothing of it.'

Council's response to this was quite telling:

I knocked on each and every one of those neighbour’s doors and nobody I spoke to had received notification from Council or been paid a visit from anyone from Banksia Park Puppies. In fact, below is an image of a Facebook post from one such neighbour I visited, who has an adjoining property to the proposed puppy factory.

The post is in response to The Age article being featured on the Facebook page for Oscar’s Law:

“I am also seeking confirmation that the signature of Camillus O’Kane is that on the application, and if not I’d like confirmation on who initialed it on his behalf and if in fact he has seen the document at all.”

This query was not responded to or acknowledged. It seems strange that a decision with the likelihood of being controversial would not have been before the town planner, instead of being initialed on his behalf as the application determination indicates:

“I am also concerned regarding the suspicion of locals that this approval is connected to the decision to demolish the local War Memorial Hall. This suspicion is only strengthened by the knowledge that a relative of the Hams, another puppy farmer named Pam Edwards has been heavily involved in the campaign to demolish the hall.”

There was no mention in the response of the War Memorial Hall, which does not surprise me at all. It appears the Council's free pass to a puppy farmer has highlighted to me some extremely questionable behaviour that requires further investigation and I will be certainly referring what I have learnt thus far to ICAC. However this will have to be explained in another article at a later date.

“Given the property also borders Edward River Council and they have residents also voicing concern. I was hoping you could forward me any correspondence between the two councils on this matter without the need for a Freedom Of Information request.”

No such correspondence was provided or referred to

In regards to Pam Edwards, council’s response was:

“With regards to Pam Edwards I understand that she has a small number of animals which have the occasional litter however she does not operate on a commercial basis.”

This response raised my eyebrows.

So clearly council are aware of Pam Edwards and her small number of animals that have the occasional litter. This came across to me as council defending someone whom I’d referred to as a puppy farmer, as anyone would jump to the defence of a friend or colleague.

So let’s have a look at Pam’s activities that aren’t on a commercial basis. Let’s start with her property, of which an aerial shot is pictured below.

The picture clearly shows several dog sheds and yards — enough to hold around 40 breeding dogs, which is hardly a small number; in fact, it is a number most would consider a commercial quantity. These sheds don’t come cheap, you wouldn’t build them as houses for a few dogs, that’s for certain What these sheds are is a substantial commercial investment.

Maybe that explains why sources allege that Pam regularly heads down to Nagambie to sell unvaccinated puppies to a middleman to supply to pet stores. Perhaps these retail stores don’t operate on a “commercial basis” either?

This makes me wonder how much the council know about Pam Edwards and her supposedly non-commercial puppy farm.

These also lead to other questions, like does she have an ABN number and does she pay tax on her alleged income from the puppy farm?

The real question is what are the Council going to do about this?

As I said at the start, there is a storm brewing in Finley and those involved have Matt Hams and his friends to thank for bringing it to our attention.

The responsible thing to do would be to reverse the decision, allow the neighbours to have a say, and perhaps allow the decision be made by the Land and Environment Court.

Rest assured, there will be more to follow on this matter.