FOI documents indicate the death of Manus Island refugee Faysal Ahmed was pre-empted by the Immigration Department before his transfer to Australia — a day before he died. Kellie Tranter reports.

WHEN AN ADVOCATE for asylum seekers detained on Manus Island and Nauru suggested to me that asylum seekers only get air-lifted to Australia when they are going to die I thought it was hyperbole.

Documents released under Freedom of Information legislation suggest otherwise, confirming that bureaucrats in Canberra had prepared media talking points in the event of the death of Mr Faysal Ahmed before his transfer to Australia — a day before he died.

Another Manus refugee dies as Turnbull dishes out hypocrisy to the homeless https://t.co/yJu24kOMFD @IndependentAus

Yet by 1.22pm on 23 December 2016, the Department of Immigration and Border Protection (DIBP) media operations had already emailed various ministerial advisers, noting:

'For awareness, please see attached draft contingency talking points regarding the refugee on Manus who is being transferred to Australia after suffering a seizure and fall. The transfer is likely to happen at 4pm today. We haven’t received any media inquiries as yet, and the attached haven’t been fully cleared however sending them to you for your early awareness. Once fully updated and cleared, we’ll send to the whole CC list.'

'Departmental statement if Mr Ishak Ahmed passes away: A 27-year old Sudanese refugee sadly died today from injuries suffered after a fall at the Manus Regional Processing Centre. The man is believed to have fallen after suffering a seizure which resulted in a serious head injury. The man was taken to IHMS Clinic on Manus for urgent treatment. He was then airlifted to Australia for further medical care. The man died XX at Royal Brisbane and Women’s Hospital. The Department is not aware of any suspicious circumstances surrounding the death and expresses its sympathies to his family and friends (if appropriate). The death will be reported to the Queensland Coroner. No further comment will be made at this time.' 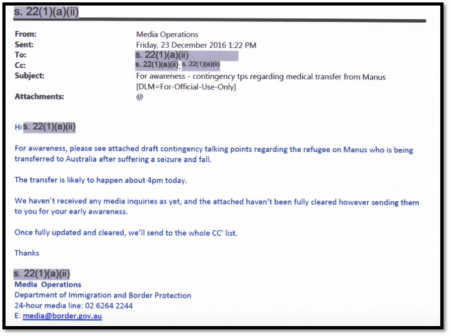 Minister for Immigration Peter Dutton was quick to sledge Fairfax in recent times:

“I thought the productivity of Fairfax went up last week with the strike. I don’t think lives were affected one way or another. I think people realise you can live without reading Fairfax newspapers. I think it’s a better way to lead your life — that would be my advice.”

Despite this, his ministerial advisers became rather excited about the Fairfax coverage of Mr Ahmed’s death.

At 9.52am on 28 December, a ministerial adviser in Peter Dutton’s office sent an email to DIBP media operations, in relation to Mr Ahmed’s complaint letter published in the Sydney Morning Herald on 26 December.

‘As discussed, the following link is where the complaint letter appeared, Can you advise if you received and if so, provide us with your response.'

An email thread then followed to ascertain whether or not Mr Ahmed’s complaint form was received.

An email dated 28 December 2016 from the Manus health services manager to an unidentified recipient stated:

I am unable to confirm whether we received the complaint pictured in this article as it does not have an FC number allocated to it, I can therefore only assume it had not, when it was photographed, been submitted to BRS [Broadspectrum Ltd] for processing. If you are able to confirm with the Complaints team whether it was received by them? I cannot check Faysal’s record as it has been locked, but according to our complaints register, the last complaint we received from him was on the [date redacted]. 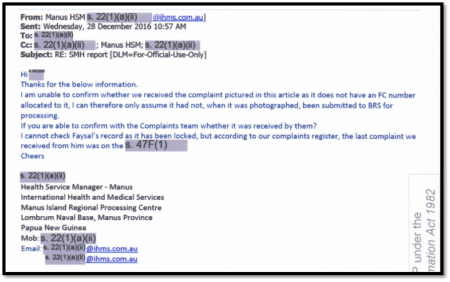 At 11.30am, an email was from the Manus Regional Processing Centre Australian Border Force operations lead to Manus operations asked:

‘I understand you want all enquiries to go via Immiquery, which for all complaints we have done so. However on this occasion can we check with Complaints team if they received the copy which is subject of media reporting? Just want to confirm it was received and the FC reference.’

A 12.40pm, an email from the Manus feedback and complaints coordinator to an undisclosed recipient at Broadspectrum, in answer to the question whether or not Mr Ahmed’s complaint form was received has been redacted.

An email on 29 December 2016 from the Manus operations manager, stated:

‘Note the response below from the Complaints team. I have also added a couple of his [Mr Ahmed’s] recent complaints that we did receive recently [redacted]. The last complaint received by Faysal was [redacted].’

The Queensland Coroner is yet to make any findings in relation to Mr Ahmed’s tragic death. But given the apparent paucity of accurate contemporaneous records, as demonstrated in the non-redacted emails referred to above and the drive to keep hidden any material potentially incriminating to the authorities involved – as evidenced by what has been redacted – the coroner would have to look very circumspectly at any information provided by any of them.

Discovering the true story behind any event affecting any government authority – and particularly any event involving unpopular policies or death or injury to those in their “care” – ought not be reduced to a treasure hunt for titbits of relevant information coupled with inevitably necessary speculation to flesh out the narrative.

Our Government, in all its manifestations, should be putting to its citizens “the truth, the whole truth and nothing but the truth”, rather than spin doctored versions of what happened and in some cases – like Mr Ahmed’s – what had not yet happened.

Accountability in government is becoming more elusive and more illusory with every passing day.

New from @KellieTranter: The era of post-truth: Look no further than Manus and Nauru https://t.co/f9znNr365Q @IndependentAus