On your bike, Lance

Lance Armstrong will be seen making his "confession" to Oprah Winfrey later today. Fellow Texan James Moore says he should just ride away. 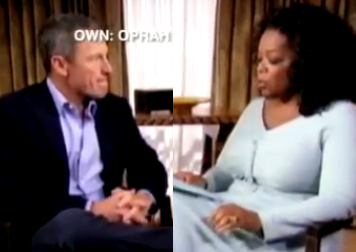 HOW I'D LOVE to not think about Lance Armstrong. Again. Ever.

But I live in Austin. And have lived here since Willie was singing at the Armadillo World Headquarters and George W. Bush was skipping out on National Guard service. We have a bikeway here named after Lance and he’s got a prominent bike store downtown and a cancer foundation and there is a city full of sycophant Lance lovers and politicians who would forgive him for polluting Hill Country swimming holes. Or dumping rock star girlfriends when they get cancer. Just because he is Lance. And taught us all that it’s okay to put on Spandex and ride skinny tire bicycles and beat our chests about greatness. Just work hard.

And lie. And cheat. And bully people who know you are lying and cheating.

I simply do not understand Lance Armstrong apologists. The arguments they make are absurdist in the extreme. Don’t we need to be concentrating our legal resources elsewhere? Oh, wow, big shock, an athlete doped and cheated. The people who trivialize Armstrong’s cheating would not tolerate similar behavior by their own children. But Lance gets a defense most cheaters and lawbreakers don’t. He is able to raise what one critic calls, “The Magic Cancer Shield”. Because he’s done so much for so many others, can’t we just let it go?

“There ain’t no way to hide them lyin’ eyes.”

Nope. We can’t. Because we shouldn’t.

Lance Armstrong betrayed the mythology of the American dream. All we Americans wanted to believe in him. He was the All-American boy with the All-American name. He overcame cancer. Won the toughest endurance sport ever devised. Whipped the tar out of the cheese-eating surrender monkey Frenchies in their own sport. And then he founded a charity to help those afflicted with cancer so they could write their own comeback tales.

Anyone who thinks Lance Armstrong’s current apologia is more than self-serving is more naïve than people who think it’s normal to ride a bike up a mountain faster than most athletes can ride one down. The federal whistle-blower lawsuit filed by former teammate Floyd Landis has the potential to financially destroy liar Lance. Landis claims in the suit that the U.S. Postal system was defrauded of more than $30 million dollars by Lance, Landis, and their teammates because they used drugs and blood-doped.

If he wins the case, Landis could get triple damages, which is close to $100 million. That’s the approximate value of Armstrong’s fortune. He’d be wiped out to pay the court claims. And Landis would be comfortable for the rest of his life. Armstrong’s attorneys are reportedly scurrying to reach a negotiated settlement with Landis, who Lance called a liar more times than he called him a teammate or a friend, as well as the U.S. justice department. They need to work out a deal quickly, because today's the last day the justice department will decide whether to join the lawsuit.

Thursday is also the first day of Oprah Winfrey’s two-day broadcast of Lance’s admission, but not apology. In the pre-recorded broadcast, Armstrong has apparently admitted to doping, but blamed the sport and its culture for his behavior.

It is unlikely to show him expressing true contrition or apologising.

According to reports, when he stopped by the offices of his Livestrong Foundation before taping with Oprah, he apologized for the stress he had caused the organisation’s staff. He did not, however, apologize for being a cheater, liar, or bully.

He’s likely to have taken the same approach with Winfrey. A vague acknowledgment that he got caught up in what cycling was during the 90s and the first part of the past decade. Lance as the victim of a culture. It’s like Roger Clemens and Barry Bonds not knowing what they were taking. It’s just how it was in baseball. Lance won’t talk about how he ran the sophisticated cheating scheme and forced his teammates to get involved or get lost. Because this isn’t about true contrition. It’s about Lance trying to rehab his image for money. And to compete again.

Cycling interests like USADA reportedly want to use Lance to testify against the big dogs in the cheating era. What will he give them if he talks? Team sponsors and coaches and doctors and underwriters were guilty, too. They all loved Lance’s ride to glory because they made money off it. Let him fill his body with chemicals. It’s his dream. And we make bank, baby. Plus, works even better that Lance is arrogant enough to lie and deny and we can support him. Armstrong’s enablers had to know, just as Lance did, that his house of lies could not stand forever. But it was profitable enough to make it worth the effort. And so alluring that Lance seems to have never even considered the possibility that his original cancer might have been caused by the steroids he was using prior to his illness.

What value is anything said by Lance Armstrong?

He has already perjured himself once during a lawsuit when he denied doping. And he has called Floyd Landis, Tyler Hamilton, and everyone he ever rode with discredited liars. Funny that it turned out that Lance was even a better liar than his mates. Always had to be the best, didn’t ya, big guy? There might have been a supplement he took that fell into the category of LEDs, Lying Enhancing Drugs.

Numerous organizations and sponsors will all ask for a return of their money because of Armstrong’s fraud. The State of South Australia is planning to demand Lance return millions in appearance fees. The Sunday Times of London will seek the $500,000 it paid him in a settlement. He’s likely to be sued again by SCA, a Dallas company that Lance took to court to pay him a $5 million dollar bonus. SCA had refused on grounds that Armstrong cheated.

Any apology from Armstrong needs to be made personally to people like Betsy Andreu and her husband Frankie. Or Greg Lemond, the first American to win the Tour de France. Or Emma O’Reilly, the masseuse who reported Armstrong’s use of drugs. Armstrong later implied she was just a woman of disrepute with other men. Or journalist David Walsh who wrote “L.A. Confidentiel” and whose employer was sued by Lance. Lemond had a bike brand with Trek that was doing well for 13 years until he called out Armstrong for cheating. And Trek, an Armstrong sponsor, stopped producing the Lemond series of bikes.

Possibly no one took more grief from bullyboy Lance than Betsy Andreu. Her husband Frankie was one of Lance’s best friends and rode with him until the two of them testified that they heard the troubled Texan admit to a doctor he had used performance-enhancing drugs. The confession came in Indianapolis when Armstrong was being treated for cancer. Lance constantly attacked the Andreu’s publicly, made it all but impossible for Frankie to get sponsors or even work, and suggested that Betsy was simply troubled and jealous of Lance’s success. Instead, she was simply a truth-teller who refused, unlike many people, to get wrapped up in the lie being told by Lance Armstrong. She won. He was defeated by a diminutive, principled woman, who was the first to stand up to him.

And now Lance Armstrong just needs to ride away.

(This story has also been published in the Huffington Post.)