This week the Senate is set to debate the "Media Reform" Bill. The Turnbull Government's aim is to update legislation that has an "analogue" outdated feel in a "digital" media environment. However, as Doc Martin reports, there is one glaring omission — any attempt to control Rupert Murdoch’s media empire.

THE ALP and the Greens are opposing one of the key changes the government is trying to get through Parliament in its media reform bill.

While there is some agreement that the so-called "reach" rule, covering market share, should be amended, both the ALP and the Greens have flagged their opposition to changing the ‘two-out-of-three; rule which prohibits one company from owning both broadcast and print assets in the same market.

There are three key changes proposed in the legislation, "the 2 out of 3" rule, the "reach" rule and provisions to require more local programming in regional markets following any broadcast licence merger as a result of the other two changes.

However, as I’ve previously argued in IA, these changes won’t really increase media diversity because the elephant in the room – Rupert Murdoch’s NewsCorpse – manages to step around them with ease.

Two out of three ain’t bad

However, Labor and the Greens have moved amendments in the Senate to block this change. A spokesperson for the ALP acting shadow communication minister, Mark Dreyfus, told IA that the government’s plan would make the concentration of media ownership worse.

In a statement given to IA, Labor argues that scrapping "2 out of 3" won’t benefit consumers:

The abolition of the two out of three rule would lead to fewer voices being heard in an already narrow media landscape.

Media concentration in Australia is amongst the highest in the world, and that the majority of voters rightly disapprove of changing media ownership laws to allow a single company to control a newspaper, TV network and radio network in the same area.

“The government wants to dump the media regulations known as the 75% reach rule and the two-out-of-three rule. The…” https://t.co/ruw65hoTLT

Current legislation prevents any one commercial television licence holder from having coverage of more than 75 per cent of the population. The "practical effect" of this rule, according to the Explanatory Memorandum accompanying the Bill – Broadcasting Legislation Amendment (Media Reform) Bill 2016 – is that it prevents any merger between cosmopolitan licence holders and regional networks. But this separation is essentially a fig leaf anyway because of the programming links between rural and metropolitan networks, and because of the new national digital channels managed by the big three TV stations, Seven, Nine and Ten.

The third tranche of changes – new rules requiring commercial television licence holders to broadcast a prescribed amount of "local" content each week – are designed to ensure diversity in regional areas.

Over the past ten to 15 years, there has been a steady decline in the amount of original and "local" programming produced outside of the metropolitan centres. One of the biggest concerns of regional viewers and voters has been the closure of local news operations outside capital cities. The new rules would mean that the amount of local content would have to increase slightly if a licence changes hands — a situation known as a "trigger event" in the legislation.

Turnbull's media reform bill all about helping media moguls — not the public. https://t.co/j5h4ZfT37Z

A weak response to the digital revolution

There is general agreement that the media landscape has changed dramatically and continues to evolve because of the internet and new digital media platforms, but the Turnbull Government’s failure to deliver on its National Broadband Network (NBN) promises means that access to new media is uneven across the country.

Many Australians can’t readily access content online anyway, because they don’t have quality, reliable internet access, thanks to the Turnbull Government’s second-rate copper-based NBN and stuff-up of the satellite installation process in rural and regional areas, the Labor spokesperson told IA.

The Coalition introduced the Media Reform Bill in the last Parliament and it is evidence of the government’s inability to effectively manage parliamentary business that has seen it delayed for nearly 12 months.

Mark Dreyfus’ spokesperson told IA that the government has failed to address the real problems caused by outdated media regulations:

@randlight @johndory49 Is Malcolm like Dorian Gray? Sold his soul to Ruppie & will forever appear favourable in his papers....

Labor has argued that in over a year since announcing this legislation, there could and should have been a comprehensive, evidence-based inquiry to support genuine media reform, by looking into the ownership and control rules, content rules and licence fees in the context of the contemporary digital media environment.

According to the Labor spokesperson:

‘The media landscape continues to undergo dynamic change. We need a comprehensive vision and the execution of sound principles-based policy to ensure our media laws support a both thriving democracy and a competitive media sector.'

Labor and the Greens expect their amendments to pass in the Senate and a spokesperson for Greens Senator Scott Ludlam told IA that the government might even accept scrapping changes to the 2-3 rule in order to salvage something from the Bill.

Labor is willing to work with the government to see the repeal of the outdated 75 per cent reach rule and the introduction of new local programming requirements following a trigger event.

We moved amendments in the House of Representatives that could have seen these changes sail through Parliament last year, but the Government arrogantly dismissed this offer. If the Bill is put for debate in the Senate we will again move this sensible amendment.

The pressure is now back on the government to deal with a hostile Senate; the opposition is holding out an olive branch of compromise, but it has not yet been accepted.

But what about Rupert?

News Corp’s vast subscription broadcast network, Foxtel, is not caught under the broadcast legislation, so news escapes the controls of both the reach rule and 2/3, even though technically it operates in a national market where the News Corp broadsheet, The Australian, is circulated, easily encompassing more than 75 per cent of the population ("reach", in the legislation).

Conveniently for Murdoch, both The Australian and the Australian Financial Review are excluded from regulation under the audience reach and 2/3 provisions of the Broadcasting Services Act 1992.

This is how this is explained away in the memorandum accompanying the proposed changes:

An "associated newspaper" is one that that is "linked" in terms of circulation with the relevant licence area. Importantly, this excludes the national newspapers, The Australian and the Australian Financial Review, and as a consequence, the ownership of these papers is not regulated through the media control rules.

This is an important loophole for NewsCorpse and the Murdoch clan, and it is the reason why Lachlan Murdoch is able to be involved in News Corp, the Nova radio network and Channel Ten — even though this might seem like a technical breach of the rules.

The broadcast regulator, the Australian Communication and Media Authority (ACMA) and the Australian Competition and Consumer Commission (ACCC) considered the arrangements between Foxtel, News Corp and the Ten network.

In 2015, they both decided that there was no conflict in the arrangement because, despite his close ties to all three entities, ACMA declined to find that Lachlan Murdoch exercised ‘control’ as defined in the Broadcasting Act.

‘The ACMA considered that, while Mr Murdoch was in a position to exert influence on Ten, that level of influence fell short of “control” as prescribed by the BSA,’ it said in a statement at the time.

The ACCC said there would not be a decrease in competition despite closer ties between Lachlan, Foxtel and Ten.

'While the acquisitions will lead to a greater alignment of Foxtel’s and Ten’s interests, and will increase the degree of influence Foxtel has over Ten, the ACCC considers that the proposed acquisitions, on their own, are unlikely to result in a substantial lessening of competition.'

Two years’ on, and the Murdoch clan continues to exercise influence over both the politics and the practice of media regulation. As Turnbull’s eager courting of Rupert earlier this summer shows, the old man only needs to lift a finger to get his needs met from a compliant Coalition government. 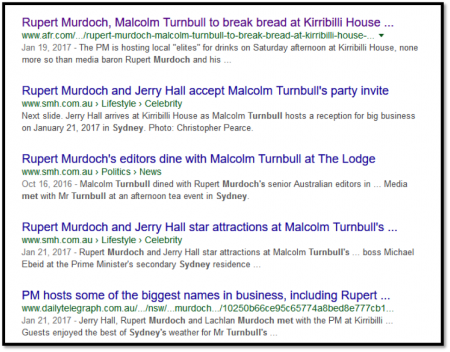 Murdoch and his minions get access to Turnbull that we would never have.

Media Sauce: When too much media reform is barely enough https://t.co/ReWFlS7nUx @IndependentAus