The lightness of footballer Nathan Broad's penalty for the online trafficking of intimate photos makes a mockery of his victim, says contributing editor-at-large Tess Lawrence.

Insofar as gender politics is concerned, Monday's press call said very little but said it all.

The 24-year-old Richmond Tigers defender and former apprentice plumber has copped a laughable "sentence" that is so mild it makes a mockery of the parasitic online trafficking of intimate photos of a woman he claims he "liked and respected". Past tense.

“I sent a very private picture without this young woman’s consent. I am ashamed and embarrassed. I made a very bad drunken decision.”

For his crimes, Broad's punishment was almost an endorsement. He has merely been suspended for the next three home and away games in 2018. So what? His home club and the AFL are away with the faeries.

Given that the woman's naked torso was photographed wearing his Premiership medal and the photo posted mere hours after the Grand Final victory over the Adelaide Crows, it is understandable that like the joyous erupting of the city of Richmond, thousands of Victorians, players and supporters, Broad and his partner were in post final euphoria.

ENJOY THE GRAND FINAL WIN. BE HAPPY. BUT DO NO HARM

Good stuff. Enjoy. Be happy. But do no harm.

Ironically, on Grand Final day before the last siren went, Shayne Hope, writing a background piece on "Broadie"  in The West Australian, referred to his earlier days of partying and drinking being behind him, and quoted his nan, Evelyn, describing him as being very “loyal and trustworthy ... a caring sort of a boy ...”

Hope's harbinger article also quoted former Swans teammate Tallan Ames, talking about a watershed moment for Broad when they were in Thailand several years ago.

... I think we’d had a few too many Tiger longnecks sitting on a beach in Ko Pha Ngan ... A few of the boys were sort of at the crossroads after a pretty solid year and Broadie was a fringe player back in those days ... I was the elder statesman on the trip and I just said, ‘hey look, I was in your position many years ago and there is a time when you’ve got to make a call, but there’s always a scenario where if you just give it one more crack to really understand where you’re at, you might come out the other end feeling that extra year can set yourself up ... He took the advice on board from there and had a ripper year in 2015.

... He pulled his head in in a few ways that got him straight on track and it obviously worked out for him.

We’re all entitled to have a few beers and do a few other bits and pieces when we’re that age … but you can’t have the best of all worlds when you want to make a name for yourself ... He definitely took the right turn and came out in leaps and bounds ... He went into more of a moderated way of living.

Obviously, Broadie didn't have the time on Grand Final Day to read Hope's article and refresh himself on his mate's wise words.

Regardless, there have been endless workshops and remedial talks and consultations with footballers about their "women troubles".  It ain't automatically women who are the "trouble".

CONSENT IN THE AGE OF VIRAL TECHNOLOGY

What consenting adults do freely is one thing, but where there is no consent it is another matter entirely. And consent in the age of viral technology can be fraught with future ramifications and – as we know in terms of social media – tragedy.

Further, in this case, the woman concerned voiced her non-consent and on his own admission, Broad agreed to delete the images. But he lied and betrayed her.

“… By sending the picture I lied to her and broke her trust.” His words.

Without a sense of irony, he argued for the woman's privacy:

"This young woman deserves to have her privacy respected. To the media ... the longer this story keeps running the more suffering it will cause her and her family. I am the one who deserves to be punished but this woman does not deserve any more pain ...”

The woman was treated like a body. A nobody. A thing. A trophy. A naked fleshly backdrop for a Premiership Medal.

Three weeks is a weak misogynistic response - let's punish Broad but not too much. Get real @AFL. https://t.co/u1U40dwSrB via @theage

Haven't we "obscene" and heard all the trite and contrite before? Watched the ushering in and out of players and club officials reading out deftly written contrived statements, taking no prisoners and taking no questions from the press?

Broad's statement was only six paragraphs. It probably took a phalanx of QCs to write. It would have taken even more QCs to rewrite it had it been written by Attorney-General George Brandis.

A lawyer and the AFL's first female club president, only last year she proved she was "the right stuff" and handballed the Tigers to their first premiership win since 1980.

The West Virginian-born O'Neal survived an aggressive attempt by the "Focus on Footy" (FOF) group to dropkick her from the presidency and take Peggy down a girlie peg or two. It was an own goal for the FOFs. They've crawled back into their man cave.

In 2014, O'Neal chaired the Victorian Government's Inquiry into 'Women and Girls in Sport and Active Recreation', that resulted in a five-year game plan.

O'Neal now convenes the Change Our Game champions program — one of the several initiatives spawned by the plan.

Her statement came after Broad's mea culpa and included the undertaking that:

"The Club – in conjunction with the AFL – will not allow such behaviour to go unpunished and, as a result, Nathan will be suspended for the first three home and away games of the 2018 premiership season."

"We are incredibly sorry for the distress Nathan’s actions have caused a young woman who deserved better ... "

"The young woman’s anonymity is of paramount importance now, and into the future, and we ask that everyone respect that.”

Would that be like the respect that boofhead Brendan Fevola had for Lara Bingle when he sent his mates a photo of her naked in the shower?

Brendan #Fevola could be in more hot water over a nude picture of model Lara Bingle. Watch here http://media.theage.com.au/?rid=58967

NOT SINCE PSYCHO HAS A SHOWER SCENE PROVOKED SUCH ...

I wrote in IA:

Not since 'Psycho' has a shower scene provoked such public discussion.

This is how I assess things. A creep called Brendan Fevola – an over-rated footballer and human being – does the dirty to a girl he's bonking and takes an illicit photo of her naked in the shower. She's a stunner, a trophy bonk; he's cheating on his wife and kids. But hey, his silly willy gets an outing and he's got something for show and tell the boys. And boy, does Brendan show. And does Brendan tell. Hey, mate ... cop an eyeful ...

We have to consider the disheartening fact that of all the people that initially knew of the mobile phone photo, none saw fit to act against it.”

Did anyone involved in the distribution of Broad's photo(s) other than the woman concerned, act against it?

I wrote then, as I do now, that we need to address the issue of these societal and sexual psychopaths — since it is true that the sports arena is a crucible that merely reflects the wider community.

... As a communications ethicist and consultant who specialises in communications forensics, I suggest that Ms Bingle's media consultant and legal team investigate application to the Court to seek Orders for the forensic tracking of the mobile phone "thread" from Fevola, so that all mobile phones, emails, computers, etc, that not only received the illicit photo of Ms Bingle, but also transmitted them to others, be cited in any legal action and also be liable to pay their share of any damages that may be awarded by the Court. Too harsh? I don't think so.

This story ain't done yet. What happened to Lara is date rape drug stuff. It could and does happen to any girl, woman, any boy, man, or child. This is about us and modern technology. 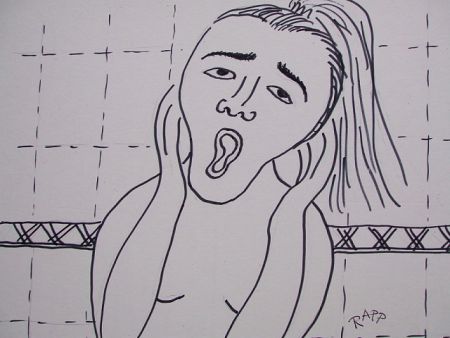 Illustration by Katharina Rapp based on a 'Munch' idea by Tess Lawrence.

Ditto to all the above in relation to the Nathan Broad case.

Again, I suggest to Peggy O'Neal and the AFL that you investigate the trafficking of Broad's photos on social media and mobile phones — and find out who on-sent the Broad photo to whom; suss out the viral chain and name and shame those who did. They are accomplices.

If you really want to help to deter this form of photographic pack rape men-tality, you would relentlessly pursue this avenue and clean up your own act in-house — and not wait for anyone to complain to the police.

The reality is that Richmond and the AFL have squatted on this for weeks. Salacious rumours have been allowed to fester and the woman's identity – that has long been guessed and revealed – has been well and truly outed and her reputation viciously torn to shreds.

Australian Rules, in particular, seems imbued with a six-pack mentality. Does the godlike status accorded to Australian Football League Premiers give them a need to justify and validate their sexual pulling power?

Let's zoom in a little closer. In fairness, one has little or no control over what images/emails/attachments are sent to us or posted on social media. And sometimes one opens emails that you wish you had simply deleted.

But hey, if you get one from a Grand Final teammate, of course, you're blooming well going to open it.

French feminists who set up anti-harassment phone line for women close it after three days https://t.co/ShH6j7Hrnr

GET OVER IT. NAKED SELFIES THE CUNNILINGUA FRANCA OF ONLINE MEDIA

RICHMOND TIGER HAS TO BE GOT BY THE TALE

IF LEOPARD DOESN'T CHANGE SPOTS, TIGER MUST CHANGE ITS STRIPES

This combined with the burgeoning and equally bullying practice of governments, institutions and utilities in forcing young and older alike, to surrender our privacy and private details – often on the pretence of inter/national and individual security and spurious welfare inquisitions – means further corrosion of our privacy.

The awful reality of data gauging, sharing and outsourcing to private, sometimes corrupt agencies and call centres is gradually stealing the individual's identity and reducing us to mere algorithmic equations that the majority of us do not fully comprehend.

That is why Richmond Football Club and the AFL need to do more about non-consensual illegal, postings — and track down all the traffickers connected with the Nathan Broad matter.

It shan't surprise me if some of the traffickers are dads and have daughters of their own.

The Richmond tiger has yet to be got by the tale.

HOT TOPIC | Should @Richmond_FC’s Nathan Broad have been suspended for more than 3 matches..? #sun7 pic.twitter.com/os4dZPvkWm