THE TRAGIC Christchurch mosque attack, which claimed fifty lives and injured fifty others, sent shockwaves of distress and sadness around the world. Muslims in New Zealand are considered as moderate and peaceful citizens who have integrated respectfully over the years to a society and country who welcomes them and the diversity they bring.

Being our neighbouring country, we as Australians have felt this recent act of terror on a personal level. This incident prompts us to ensure that we continue to embrace and take pride in our interfaith and interracial communities, where we encourage our differences to unite us, not divide us. 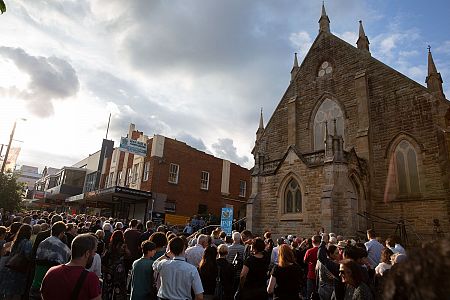 The city where I live united together on 18th March to stand in the face of terrorism. Hundreds gathered at the lower end of Wollongong’s Crown Street Mall, where leaders from Christian, Muslim, Buddhist, Bahai and other faith backgrounds stood among families, children, local politicians, the media, local mayors and police to honour the victims of the Christchurch massacre. We were all united in grief.

It was comforting to see over 900 people attend the peace vigil, which was such an emotional event.

This congregation acknowledged the generous responses of the victims’ families and the calming, measured and thoughtful responses of Muslim leaders. They choose to act with dignity and grace during this distressing time even though many were personally affected. This further attests to the peaceful nature of the Muslims in New Zealand.

"Racism exists, but it is not welcome here." New Zealand Prime Minister Jacinda Ardern received a standing ovation as she addressed the crowd during a national memorial service honoring the 50 people who died in the mass shootings in Christchurch https://t.co/GME6ZOM8TU pic.twitter.com/FDEaU5MVLW

Another leader who choose to act with the same kind of compassion and considered response was New Zealand’s young female Prime Minister Jacinda Ardern. Her task was to console an entire nation reeling from the worst mass shooting in New Zealand’s history. Through her actions, she set a new benchmark in leadership by putting all differences aside and sharing her love for humanity.

By promising to change gun laws within ten days and fulfilling that promise, she changed the course of history not only for New Zealand, but for the entire global community. I have never seen or heard such a genuine expression of power and control from any contemporary leader in our world.

Through her genuine compassion and support, people who were previously strangers, have become her admirers and friends. She has earned the title of the best contemporary representative of ideal human values and she has earned our love, respect and prayers.

This leads me to my role as a passionate educator and the critical role education plays in developing a global tolerance and understanding for all humankind.

Where do we go from here?

Just as our leaders have acted with courage and determination at this time, we must do the same as educational leaders.

Conflicts arising from religious, cultural, linguistic, gender and economic differences have resulted in intolerance of others locally and internationally and it is our duty to ensure that our youth learn that there is no place for prejudice in this world. Furthermore, in our globalised world and age of knowledge, there is an increasing trend to fear the unknown.

It is the undeniable responsibility of us as educators, with our communities, to increase awareness of our similarities and celebrate what makes us all unique and different.

Two approaches being used to combat such issues in our modern world are Global Citizenship Education (GCED) and Interfaith Dialogue (IFD) programs. Education, particularly school education, has a critical role in raising awareness of global issues. Educators and schools are an effective and sustainable way of connecting individuals, cultures and communities across borders.

Head of the Department of Religions at the German University: Interfaith dialogue is of crucial importance
.
.#MuslimCommunities pic.twitter.com/XKTqQz9EiO

It is imperative that schools and tertiary institutions initially recognise and then incorporate GCED and IFD into their curriculum and teach students about respect, tolerance and interfaith dialogue. This is something all nations must strive to achieve.

Both programs have their own merit but they are inextricably linked and they compliment each other. Ultimately we are all global citizens and we need to be respectful of each other and we need to start learning this from a young age.

Through GCED and IFD, educational institutions can actively participate in shaping the globalised world and addressing some of the issues that it brings. Issues arising from differences in cultures, faiths and backgrounds can only be overcome by enabling individuals from various backgrounds to communicate, cooperate and collaborate through an effective platform.

The horrendous attack on the mosques in New Zealand negatively impacted citizens of all faiths and backgrounds. The unity and support for the victims of this dreadful massacre is a reminder that the multi-religious harmony enjoyed by Australians and New Zealanders is an exception rather than a norm in the world.

To continue the united front of our communities, it is essential that we focus on educating the youth and new generations about GCED and IFD.

Today after an interesting session with people of different views on religious understanding both intra and inter. A session discussed on how to bring about religious intolerance down in order to promote peace among the people.@AmeerLukman10 @Algambiawiy pic.twitter.com/brPqONLaY7

On a personal note, I believe that the concept of interfaith dialogue and understanding must not only be recognised and included but embedded in schools’ syllabi and programs. Interfaith dialogue has the potential to address some of the challenges and barriers to GCED programs, and hence support governments and nations in addressing the issues arising from globalisation. IFD allows us to focus on common grounds, rather than our differences.

Although, there remains a substantial amount of work to overcome the challenges in this field across the education sphere, particularly higher education, the challenge is achievable and essential for world peace. Let’s give our future generations the hope, courage and guidance they deserve from us.

Dr Mehmet Aslan is a school principal and a freelance writer based in Shellharbour, NSW.

Yes, thank goodness for Independent Australia and others and social media. The Murdoch backed LNP government are keen to use #Christchurch to attempt to nobble social media.