John Haly reports on the lack of moral compass displayed in the legislative and policy direction of both Abbott and Turnbull with respect to women.

LEGISLATED LAW consists of the rules and sanctions to which a society agrees. But legislation may itself be immoral or moral — such as the facilitation of slavery in which Australia once engaged, or the apparent abolition of slavery.

The founders of many western countries believed that emerging legislation would often require a constitution for a baseline moral imperative. It was this that would guide the emerging politics of their fledgling nation. Centuries later, the limitations of their predictive capacity of how a nation would evolve are evident.

Australia’s founders, for example, would not have contemplated the right of women to vote, or to be treated equally in private or public endeavours. Let’s face it, England was setting up an offshore penal colony – much like Australia's 21st century treatment of refugees – so women’s rights were not high on the agenda. The struggles of women only a century ago to acquire the right to vote – as depicted by the current movie The Suffragette – remind us that political legislative reflection of society’s morality can be slow to catch on. So, in the 21st century, how does our legislative morality stack up on the subject of the protection of women?

When Prime Minister Malcolm Turnbull appeared to have reversed Tony Abbott’s harsh budget cuts by returning $100 million in funding to support domestic violence sufferers, it seemed the political morality had begun to shift. Few focused on the fact that Abbott had cut $300 million in financing of legal aid, shelters and other support services for domestic violence.

In Abbott’s first fortnight in office in 2013, he:

His Government’s asylum seeker record was particularly harsh on women. He started by separating a refugee mother from her newborn baby. Thereafter he, hid information about the Government’s treatment of asylum seekers and the sexual assault and pressuring of women for sexual favours by the guards. These failures of the duty of care were later revealed by the government’s own Moss Report, after the government had disparaged Gillian Triggs’ earlier similar account.

Then, the independent Immigration Health Advisory Group, which had been actively lobbying for attention to the health needs of female asylum seekers, was disbanded.

Abbott also suspended the Wage Connect program — despite its good outcomes for unemployed people, particularly women attempting to return to the workforce after raising children.

He converted Start-Up Scholarships to loans and increased the debt of 80,000 students by $1.2 billion.

The end of wage inequality … news!

As for wage inequality, that appears to be disappearing. Much like the “stop the boats” policy, it was not that the inequality or boats stopped but only that the reporting stopped. 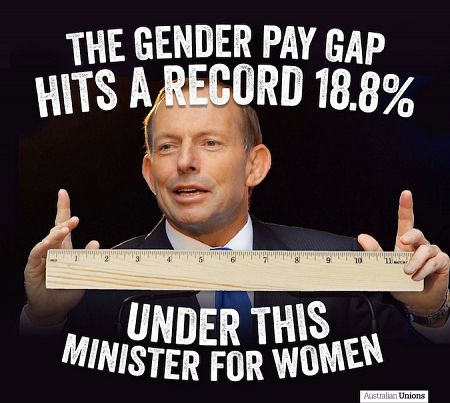 Minister for Indigenous desperation and deprivation

Abbott’s failures towards Indigenous people are a matter of very public record, especially as he was Minister for Aboriginal affairs. When he abolished the position of Coordinator General for Remote Indigenous Services, he removed a role that managed dealings across a range of different government portfolios. This increased the risk that women and children’s health and safety issues would deteriorate.

The AusAID graduate program eliminated 38 jobs when it was abolished. The program had also contained equity requirements, which promoted female graduates.

When he defunded the Public Interest Advocacy Centre by $34M it returned prioritising access to the law to those with the deepest pockets and the fattest bank balances instead of promoting public interests issues for economically disadvantaged groups, such as women.

Women were also more greatly impacted by Abbott’s scrapping of the Home Energy Saver Scheme which helps women from low income households lower their electricity bills by an average of $300 less a year. Interestingly, he pronounced his greatest achievement as Minister for Women, the throwing out of climate legislation as it allegedly created a $550 a year benefit for the average family. This "achievement" was somewhat undercut by killing the Home Energy Savers Scheme and the savings of $550 a year never eventuated.

Abbott also extended his reach to harm the interests of women overseas by cutting Australia’s contribution to overseas aid, initially by $4.5 billion and then even more later. These programs supported those in extreme poverty and included the participation of girls in schools, micro businesses predominately run by women and interventions against domestic violence and women’s health.

It is worth noting that Tanya Plibersek asked Malcolm Turnbull:

“Can the Prime Minister confirm how much he will restore to the foreign aid program after the cabinet he was part of cut the budget by $11.3 billion?”

He refused to answer and as yet, nothing has changed. Which leads us to the question of what has really changed now that Tony Abbott is out and Malcolm Turnbull is in?

From Abbott to Cash —which woman chose this?

Turnbull’s first reshuffle was to introduce more women on the Government’s front bench — although this flies in the face of his record on appointing women to boards and the small number of women in his previous shadow cabinet. So is this a renewed genuine interest in women or a politically strategic face saving?

Either way, is increasing the numbers of women in politics really a major women’s issue? I am not sure the current female incumbent is doing a better job. Instead, women are more likely to be seeking representation that results in being considered with equity and fairness in society, finance, politics and leadership. The distinction therein, does matter!

The reference to “start” presumes there is more to come. Everyone who can read the list of items being funded realises that it’s not refunding anything Abbott cut. It is not refunding the women’s shelters Mr Abbott closed. The crippling of Community Legal aid was hardly positive news for women. Abbott’s wavering on defunding, then reneging, only to propose defunding later on, of legal support entities resulted in many closures.

There were few (possibly no) women’s groups desperately asking for phones, locks or security cameras and yet, that was what was offered.

Interestingly, the Turnbull Government’s latest private health insurance survey is exploring allowing private health funds to discriminate against people on the basis of age, gender or health status. Already the items removed from the Medicare Benefits Scheme target children’s surgeries and the removal of pap smears, blood tests, urine tests and imaging services that will have a direct impact on women’s health issues — not to mention the plan to phase out Family Tax Benefit (FTB) payments to the tune of $260.4 million. In addition, the government has decided to:

The Government is not only making childcare less affordable, it is not addressing access. A recent report demonstrated that city childcare centres couldn’t cope with the demand, undermining the ability of women to return to work.

Why are we engaging in this penny-pinching from women and children when there are billions in subsidies to mining, elite schools and private health insurers? Changing the tax laws to stop tax avoidance by companies would earn billions more than what is being cut. How can anyone suggest these cuts don’t represent a discriminatory bias?

Surely though, the government voice for women is the Sex Discrimination Commissioner? Unfortunately, however, the last commissioner, Elizabeth Broderick, left the post in early September, before Turnbull replaced Abbott. Gillian Triggs was assigned to act in that role temporarily but no full-time replacement has been announced under Mr Turnbull’s leadership, despite many questions. Many will be aware of how responsive this Government has been to Gillian Triggs in her primary portfolio, so one can expect her to receive the same response in this part-time job — perhaps overburdening her is part of a strategy.

For a Government that expresses such concern for women’s issues, what sort of legislative morality is Mr Turnbull exhibiting? Certainly there have been no significant changes in policy from that which Abbott initiated. When I say “significant”, I am making a concession for domestic violence support, despite it being only one third of the funding preciously cut.

But how significant was that concession? Given domestic violence refunding added support for our current death toll of two women a week but revoked none of the cuts Abbott made, does this constitute a significant legislative change in support of women? Should it be seen as a manipulative change to elicit applause from women because it was differentiated from Abbott’s moral compass?

If the legislation and policies have remained predominately unchanged in direction since Abbott left, what is the direction of moral compass exhibited overall by the legislative and policy direction of the Turnbull Government in regards the women of Australia?

The John Graham feature image is available from the IA store.