Despite being listed as a vulnerable species in Queensland, NSW and Federally, the destruction of koala habitat and colonies continues unabated, writes Sue Arnold.

Koalas are loved by most, but not all, Australians. Politicians and developers regard the species as a downright nuisance, in the way of major projects and developments. If the juggernaut of “progress” rolls on, there’s a strong likelihood of extinction in NSW and major regional extinctions in Queensland.

In spite of being listed as a vulnerable species in both States under the Commonwealth Environment Protection and Biodiversity Act in 2012, the destruction of habitat and koala colonies continues unabated.

According to the most recent Commonwealth government population estimates, in 2010, Queensland koalas had experienced a 43% decline. The highest density of koalas occurs in South-East Queensland, where development has been unprecedented as has koala mortality.

According to the Richard Branson Koala Conservancy based on Makepeace Island:

'South east Queensland and particularly the Noosa region were previously a strong hold for koalas. We understand some local populations have dropped by 90% in the last two decades and without leadership and urgent action, local koalas will continue to head towards extinction.'

Unfortunately, the Branson Conservancy focus is research, not habitat protection or the acquisition of critical habitat areas.

At a koala conference in 2009, veterinarian Jon Hanger and Jo Loader, then of the Australian Wildlife Hospital, made clear the urgency of the situation.

In their paper, they wrote:

'... regulators and legislation at all levels of government continue to fail to address koala declines in any meaningful way. Although the principles and intent of ecologically sustainable development (ESD) are espoused commonly in government policy and statute, their application (in terms of effective and measurable outcomes) is virtually non-existent. As a consequence, the localised extinction of koalas is commonplace, and the tipping points for wider, or regional, extinction seem to be looming.'

In Queensland last year, the Government allowed 21,000 mature koala trees to be cleared so the Moreton Bay Rail Project from Petrie to Kippa Ring could proceed.

281 koalas died in the area as a result of the project. Many disoriented koalas were attacked by dogs when they tried to find their home ranges.

The project’s own data shows:

Only 28 koalas were relocated during the project which saw the removal of 62 hectares of koala habitat. Nine of the translocated koalas died.

“Relocating koalas is really dangerous and problematic. Koalas know when they are not home. They get on the ground and walk for miles looking for where "home" used to be exposing them to dog attacks.”

In NSW, the situation can only be described as dire. A report published by the NSW Chief Scientist Mary O’Kane last last year claims to be an 'independent review of the decline of Koala populations in NSW'.

However, the Review committee is dominated by NSW bureaucrats (including the Forestry Corporation and Roads and Maritime Services (RMS)) with the exception of the Australian Museum, a Queensland scientist who is a consultant to RMS, and Professor Kathy Belov of Sydney University.

There are no community organisations or NGOs represented. Qualified Koala experts with relevant field experience have been completely excluded.

The report concludes there are approximately 36,000 Koalas left in NSW. Koalas must have been breeding like rabbits since 2010 as the Federal Government’s Species Profile and Threats Database (SPRAT), the most current available document on koala population estimates, states 21,000.

It is simply impossible for koalas to have increased by 15,000 in the last six years. Community groups up and down the State report major declines and extinctions, rendering the estimate of 21,000 as highly unlikely.

Apart from the Pilliga Koalas, which appear to be headed for early extinction, the review fails to examine key populations in northern NSW that are in substantial decline and provide case studies of Government mismanagement.    These are some of the highest carrying capacity in the State and critical to overall Koala survival.   For example, the NSW Scientific Committee Report, published in May this year, declared that Koalas from Tweed to Brunswick Rivers to be endangered, has been dismissed by Government and ignored by the “independent review”.

The review completely fails to address the primary cause of catastrophic Koala decline in the state. Government mismanagement and a failure of legislation and enforcement to properly protect a State and Federally listed vulnerable species.

In the very near future, a nationally recognised koala population in Ballina will be placed at risk of extinction as a result of the Pacific Highway Upgrade. Designated a State significant infrastructure legal challenges under State and Federal legislation are disallowed.

David Milledge, an experienced local ecologist, has authored a review of the RMS’s koala plans for the Ballina Upgrade section where a nationally recognised important koala population is in the path of the project.

'This section of the Upgrade will destroy koala habitat, bisect the population and cause its early demise. So called mitigation measures are untested and likely to accelerate the destruction. With curious logic, the construction is heralded by the RMS as beneficial to koalas, claiming the roadworks “will slow the rate of eventual extinction".'

'The review fails to deal with the ramifications of a suite of environmental legislation which the Baird Government has repealed, including the Threatened Species Act, plus sections of the National Parks and Wildlife Act as well as the Native Vegetation Act putting 2.2 million hectacres of koala habitat at risk.'

'The review fails to explain how the NSW government can provide habitat protection for Koalas under the new laws when its Chief Scientist claims that there is insufficient information to identify all habitats and colonies.'

A cursory examination of records held by community organisations, environmental groups and published papers would demonstrate that there is sufficient information to identify all habitats and colonies. Protecting these habitats is the primary issue.

At the Federal level, the Government undertook to develop a National Recovery Plan, which was to commence in 2014.

As of January 2017, there is no Recovery Program and the politically driven destruction of koala habitat continues unabated. 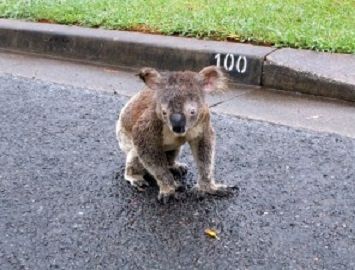 Pass the test. Subscribe to IA for less than $5 a month.