Sue Arnold's reporting on the koala death trap created by a highway upgrade in Ballina has attracted censorship by the NSW Roads and Maritime Services.

WHEN the Roads and Maritime Services (RMS) heavies a small local newspaper to pull an article featuring a well known Aboriginal Elder’s opinion over the desecration of native species and their habitat at the Ballina Pacific Highway Upgrade, things must be getting pretty bad in the NSW Government.

The Chairperson of the Bundjalung Elders Council, Mickey Ryan, together with Al Oshlack, who founded the Lismore based Indigenous Justice Advocacy Network paid a visit to the upgrade site last week, having received many calls of concern from their constituency.

As the koala is the focus of many Dreamtime stories for coastal Aboriginal tribes, the plight of koalas caught up in the massive destruction of habitat for the highway upgrade is an important issue for many Aboriginal elders. Not only koalas but also other native species impacted by the construction are a focus of concern.

After the visit – which was extensive as both men checked out a significant area of habitat burned out by a major fire in September – as well as exclusion fencing and escape hutches, I wrote an article for our local paper, the Byron Echo, reporting on their experiences. Not long after publication, the article was pulled from the webite.

On querying why the article had been removed, I received the following message from the online editor:

'Hans (Lovejoy, the Byron Echo Editor) was contacted by the RMS who claimed some errors of fact in the story. We have taken it offline for the time being to give them time to respond.'

Perhaps this extraordinary censorship by the RMS explains the ongoing silence by the mainstream media over the Ballina travesty.

The article which first appeared in the Byron Echo:

A field trip to the Ballina Pacific Highway Upgrade site last week was an emotional and moving experience for Mickey Ryan, Chairperson of the Bundjalung Elders Council. Horrified by the sight of hundreds of burned hectares in koala habitat, exclusion fencing to prevent animals moving back and forth from their habitats, Mickey was outspoken in his condemnation of the Roads & Maritime Services and the NSW government. 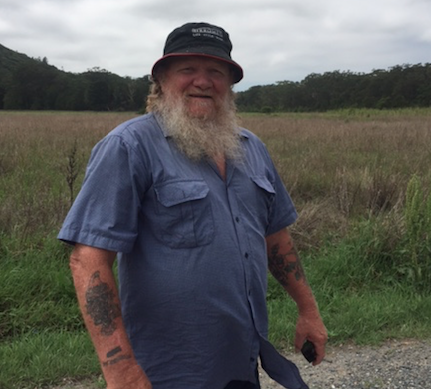 Putting up exclusion fences in a burned area where everything is so dry, there’s so much fuel and no escape route is plain wrong. Another major fire could break out any time. The way the fences are set up animals can’t get over them.  The escape hutches are ridiculous; no koala is going to use them. The RMS have created a death trap, the fences and escape hutches are amateurish. Animals that don’t climb wouldn’t be able to get over.

Witnessing the situation broke my heart, for this to be allowed is just not on. Seeing the reality here brought tears to my eyes. I ‘m told that almost 600 feed and shelter trees have been collared and ring-barked, I can see they’re dying.  All these trees are to be clear-felled, where are koalas going to get their food and moisture needs? It’s shocking to realise we’re in the middle of breeding season. What kinds of stress must be happening to these animals?

The site of the burned area along Old Bagotville road is one of the saddest things I’ve ever seen. The fences appear to have been designed to ensure animals have no chance to escape. These fences are preventing koalas from getting to their food on the other side of the road.

If you don’t have trees, you don't have rain. I ‘m seeing damage to koalas’ habitat everywhere. Things have got worse in the last couple of years you can see koala colonies dwindle. I used to see them everywhere, now I m flat out spotting any.

My people had an Aboriginal Reserve in the l920’s at Modanville. When I was a child, my grandma used to take me there. The trees were full of koalas, we would cuddle them. It was a wonderful thing to do.”

To deliberately kill their food supply by ring-barking trees is just slaughter. All I could think about what who would allow this murder of native animals? What minister would allow this?

When asked what Mickey would say to the NSW Premier Gladys Berejiklian if he had the chance, Mickey was straight to the point:

Have a look around you. Get your head out of the sand and see what’s going on! Our wildlife is becoming vulnerable everywhere. We’re losing the soul of the country. What’s happening here is downright murder?

Al Oshlack from the Indigenous Justice Network accompanied Mickey Ryan on the field trip. He was similarly horrified by the desecration.

Looking at a majestic ancient fig tree reduced to stumps by the RMS, Al Oshlack noted that the area has the highest proportion of sacred scar trees in the State:

“It’s a very sad day to see they’re all going to be trashed.”

Given the recent fine of $15,000 imposed by Council on a Main Arm local landowner for cutting down five koala feed trees, a rough estimate of the value of trees which the RMS will clear fell at the Ballina Upgrade site comes to $1.8 million. “

Unfortunately for the RMS, wildlife ecologist and expert on koalas and potoroos, David Milledge recently submitted an extensive report to the NSW and Federal governments, which confirms all the statements of concern made by Mickey Ryan.

In his report, 'Immediate impacts of wildlife and koala exclusion fencing', Milledge writes:

The wildfire resulted in extensive loss of koala foraging and shelter habitat. Loss of koala habitat from canopy incineration, canopy scorch and food tree collapse. It is not known if the exclusion fencing resulted in the deaths of any individual koalas during the wildfire, although this could have occurred as any animals fleeing the fire towards habitat to the north west of Old Bagotville Road could have been trapped by the fencing.

The on-going, cumulative impacts of the wildfire in combination with the effects of the Koala exclusion fencing and clearing and disturbance from construction of the Pacific Highway upgrade are likely to be more severe than the fire event itself.

These include the barrier effect of the exclusion fencing across an identified use/movement corridor for Koalas constraining or preventing individuals moving from burnt habitat to unburnt habitat to access essential resources.

Unfortunately the effects of the wildfire, in combination with the impacts associated with construction activities for the Upgrade now pose a major risk to the viability of the Koala and Northern Long-nosed Potoroo populations. The loss of food and shelter resources for both species caused by the wildfire, together with constraints to the movements of individuals due to the exclusion fencing and increased predation rates can be expected to substantially reduce their populations.

Further, the fencing as it currently exists is likely to actively increase the risk of koala mortality. The fence now represents a barrier to any movements of individuals that may have survived the fire but now need to find feeding resources west of the road. It also presents a barrier to movements of animals that may attempt to recolonise the burnt area as it regenerates in the future. 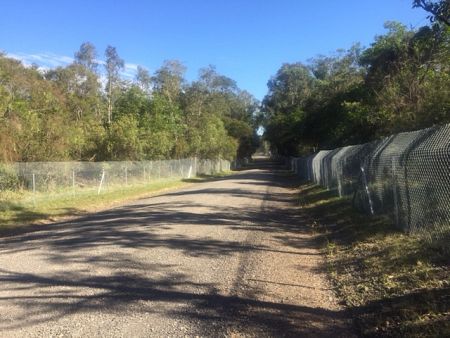 Mickey Ryan is shocked by the censorship — and angry. But his dedication and concern for the fate of koalas and other native animals caught in the RMS web of destruction will not be discouraged by the efforts to silence him.

“ There will be no surrender.”

Firefighters have been working around the clock in an attempt to contain and out-of-control bushfire, burning south-west of Wardell. pic.twitter.com/YGlhw7rtvl