There was all sorts of shenanigans at the Union Royal Commission today as Kathy Jackson spitefully ran roughshod over legal process, even throwing a sex bomb into the fray. Peter Wicks from Wixxyleaks reports.

TODAY, THURSDAY 28 AUGUST, was the day that the Trade Union Royal Commission finally entered Jacksonville and got a glimpse at the ugliness inside.

On Wednesday morning, yesterday, I sent out a tweet shown below that many asked me about and many thought I was crazy for making the suggestion of — however I though it warranted putting out.

In putting that out, I’d kind of hung myself out to dry if I was wrong, and those who have sought to defame me and brand me a bit of a loon would have been stocked up with ammo for a year.

However, it turns out my information was correct — and once the information came out officially, all manner of chaos ensued.

Three things were quickly made clear once the application was filed by Kathy Jackson's lawyer, David Pritchard SC, to not allow cross-examination by HSU National Office lawyer Mark Irving because Kathy Jackson had a sexual relationship with him over 21 years ago.

There are a few points to make about today's display.

Firstly, Jackson seemingly has little self-respect, airing her dirty laundry in such a public manner.

Secondly, she has no respect for the law whatsoever and thinks she is above scrutiny.

And thirdly, that she has no respect for legal procedure and certainly no respect at all for the Royal Commission. 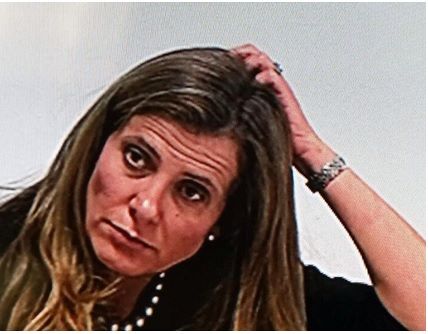 Kathy Jackson on the stand at TURC today (28/8/14): the pearls disappeared after the break.

Kathy Jackson’s ridiculous application set out to intentionally risk the integrity of the entire Royal Commission — all so that she could attempt to dodge the same scrutiny she expects others to suffer through.

I do not wish to dwell on this matter, as it was clearly designed to distract the media from why she finds herself in the witness-box under scrutiny. The Commissioner went so far to refer to it as a tactic, which damaged her credibility.

As Commissioner Heydon pointed out, Mark Irving has been the legal representative on this matter for the HSU National office for two years. It is beyond ridiculous that this issue was not raised long ago if it were indeed an issue and not left to be raised the morning cross-examination was due to start.

I don’t intend to play the game by Kathy Jackson's distorted rules.