How the ‘Kardashians of Aussie Communism’ kept up with the Jones'

The strange and twisting tale of the Yugoslavian spy, the Nazi hunter, the ABC journalist and the twice written book. Branko Miletic reports.

As a former ABC Radio National journalist, author, ALP media advisor and Communist activist, Mark Aarons hails from one of Australia's most prestigious left-wing dynasties. Over the decades, no less than his father, uncle, grandmother and grandfather were all at one stage or another leaders of the Communist Party of Australia.

For the fragmented Australian Left, the Aarons family could be considered as the Kardashians of Australian Communism.

Frequently a polemicist for a number of Eastern European Communist regimes, by his own admission, ASIO alone holds some 3,200 pages of documents on Aarons dating from the late-1960s up to the early 2000s — when he left Australia and settled near the Croatian resort town of Rovinj, either to retire or perhaps to escape the constant glare of the security services.

With a population of some 15,000, Rovinj on the Adriatic coast also once housed a branch of Yugoslavia’s "Foreign Office" equivalent.

After Yugoslavia’s 1992 break-up, Rovinj became a haven for former Communist spooks, including one who moved in similar circles to Aarons called Dorde Licina, a man who publicly rejoices in his notoriety as an operative of Yugoslavia’s secret police, known by its acronym as the UDBA.

Licina, when not working for one of the world’s most brutal secret police forces, which Amnesty International says murdered over 90 dissidents outside the borders of Yugoslavia during the Cold War, spent his time writing cheap novels, including one called The Twentieth Man, a 1979 piece of agitprop pulp fiction that is still available for download on the internet.

The book chronicles a range of anti-Yugoslav dissidents in Australia and their (fictitious) attempt to assassinate Yugoslav Prime Minster Dzemal Bijedic during his (actual) visit to Australia in 1973.

For his part, Aarons developed a reputation as something of a "Nazi hunter", lobbying the Hawke Government for a permanent Australian World War II war crimes tribunal.

Known as the Special Investigations Unit (SIU), this tribunal ran from 1987 to 1992, involved dozens of investigations and cost $120 million of taxpayer’s money.

That is the equivalent of today’s $250 million, which was the actual cost of the far more successful recent Royal Commission into Institutional Responses to Child Sexual Abuse.

In terms of a return on investment, the SIU was a colossal failure. Despite its high-calibre legal team and bipartisan political support, the SIU chalked up zero convictions for all this public largesse.

In the end, it required the political spine of then Prime Minister Paul Keating to finally pull the plug on the unit in 1992.

Then there was Aarons’ support of ALP member for the NSW state seat of Georges River and eventual State Attorney General Frank Walker, who in 1982 used parliamentary privilege to accuse a man of being a "Nazi war criminal".

Interestingly, a similar accusation against the same individual can also be found in Licina’s 1979 book.

When the individual in question, ethnic newspaper publisher Fabian Lovokovic, produced a birth certificate, Australian passport, and school documents showing that in mid-1945 he was still a school student in the local equivalent of Year 10, Walker’s accusations evaporated, as did Aarons’ support.

Despite Lovokovic repeatedly challenging both Aarons and (the late) Walker – even as recently as February 2018 – to make the allegations in public and outside of parliament, both declined, neither seemingly having the stomach to test NSW defamation laws.

There is also a curious entry on pages 26 and 27 of his 2001 book about suspected World War 2 criminals coming to Australia, War Criminals Welcome — a book that was promoted ad nauseum by the likes of the ABC’s Tony Jones.

Aarons spends almost an entire page there writing about two Australians – Steve Kardum and Angela Stojic – born in 1972 and 1969, respectively.

What someone born in Sydney in 1972 has to do with 1940s wartime Europe is unclear, nor why they need to be mentioned in a book about Nazis or war crimes, however a reasonable person might infer that this may be an attempt to "Nazi-shame" both with events that occurred on the other side of the world more than a quarter of a century before either were born.

Aaron’s latest collaborator in his seemingly endless "Balkan war", is ABC stalwart and Q&A host Tony Jones, whose relationship with Aarons goes back some 20 years, which makes the fact that Jones who along with his journalist wife Sarah Ferguson also lived in Rovinj in the mid-90s open to a number of interpretations.

Early in 2017, in his first foray as a "fiction author", Jones wrote The Twentieth Man, which incredibly not only bore the same title as the book written by the ex-spy, Dorde Licina, but also shared a similarly transparent plot and many of the same protagonists — some renamed, others not.

Without a hint of irony, in the acknowledgement page of his version of the The Twentieth Man, Jones thanks Aarons and Licina for their help.

While Jones did fatten up the storyline with an array of one-dimensional and clichéd characters like Anna Rosen (left-wing Jewish feminist), Martin Katich (hot-headed eastern European), Tom Moriarty (grizzled outsider), and Al Sharp, (incorruptible policeman), essentially Jones’ version keeps true to the same meandering plot as that of Licina’s book: a bunch of so-called "Croatian terrorists", who were not only plotting to invade Yugoslavia but have also hatched a plan to kill a Yugoslav PM during his planned Australian visit.

From a literary perspective, Jones’ The Twentieth Man is hardly Proust or Hemingway, prompting one former Fairfax editor to tell IA:

“Didn’t his publishers read the manuscript before they published it?”

But the $64 question is why would a well-known and highly-regarded ABC journalist who shares a postcode with current Prime Minister Malcolm Turnbull engage in what was little more than the "rebirthing" of Communist propaganda.

Jones was confronted by IA at his first book signing outside Ryde Municipal Library in August 2017 and asked:

His response eschewed the very journalistic principles he himself may once defended, replying simply:

While Jones’ version of the The Twentieth Man has real-life historical characters, like George Negus and Lionel Murphy, presumably for the purposes of extra credulity, Jones ignores thornier issues like the fact that Yugoslav PM Dzemal Bijedic allegedly was assassinated via a plane crash, although not at the hands any Australian-based terrorists, but allegedly by his own colleagues in a power struggle within the Yugoslav Communist Party in 1977.

Whatever the real reason behind Tony Jones’ Communist propaganda-inspired "literary career", or why he chose to move to a resort town filled with out-of-work spies, or why he was followed in his relocation by his friend Mark Aarons, it seems much like the Kardashians, the scion of the First Family of the Australian extreme Left just can’t bear the thought of being out of the public limelight for too long.

As we have seen with the Kardashian family, fame can be quite intoxicating.

And it’s not just Aarons that seems to crave media attention, as according to sources within the ABC, Jones is currently writing a sequel to The Twentieth Man.

The Twentieth Man by Tony Jones is published by Allen & Unwin (RRP $32.99) 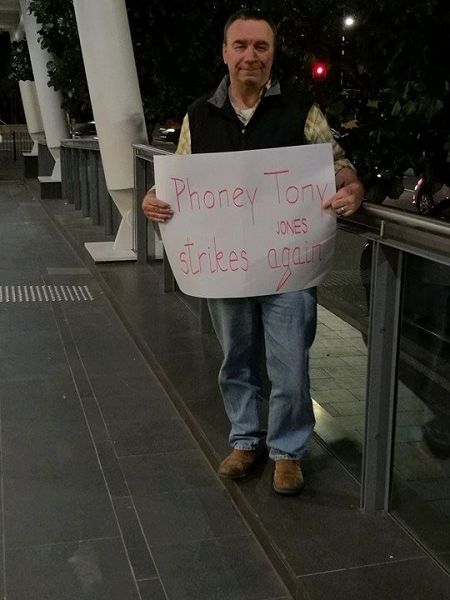 The Twentieth Man by Qanda's Tony Jones say McMahon plotted against Gorton from Isle of Capri Italy p 29. It was actually Isle of Capri on Gold Coast. He was staying with Lib powerbroker Eric Robinson.