Lachlan Barker looks at a sizzling week of sport in Australia, which saw Australia winning the cricket and picking up its first major piece of soccer silverware. 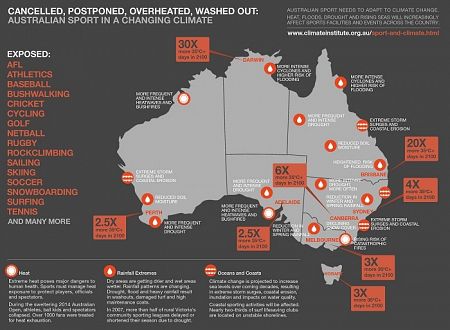 (Image via climateinstitute.org.au. Click on image to see it full size)

IT IS A TRUTH universally acknowledged that a government in possession of large fossil fuel reserves will want to mine them to the last molecule.

This somewhat odd start to sport for this week has been engendered by a report that came out this week from The Climate Institute describing the effects of climate change on sport.

In this report, The Climate Institute outline the danger to sport that climate change can provide here in Australia, particularly in summer.

Sports mentioned in the report include:

I was certainly aware of this during the Tour Down Under, held in South Australia in 2014. This event sees cyclists get out on the road and ride for 100+ kilometres a day, uphill and down dale, with sprint points during and at the end of each days racing. Now that’s a hard enough cardio load to output, even for these trained professionals, but in 2014, the load was added to immeasurably by the heat.

Three days before the event began, the temperature in Adelaide was 44.2 degrees, with predictions of more heat wave conditions to come on race days.

Despite these horrendously hot temperatures, there were no hospitalisations among the riders, but they were clearly suffering. These temperatures also hit the spectators lining the road, making just watching from under a shady tree a less than pleasant experience.

The other major event in that sizzling January was the Australian Open tennis held in Melbourne. On one day the temperature reached 43 degrees, and there were reports of plastic water bottles softening and losing shape; players were clearly suffering and even night matches were more remarkable for the visible sweating of the players, than the nuances of the tennis played.

The men's tournament was eventually won by Serbian World #1 Novak Djokovic over Scotland's star Andy Murray, while the women's was won by dominant American Serena Williams over Russia's Maria Sharapova.

Come forward to this year’s Asian Cup soccer and the heat began to enter the headlines. Australia’s last group game was against Korea Republic (formerly South Korea) in Brisbane on January 17. The match kicked off at 8pm, and the temperature at kick off was still 28 degrees, add the steamy Brisbane humidity to this and you have some idea of the cauldron into which the two teams went out plunged.

There was some talk of delaying this fixture to allow the evening to cool a bit more, but 8pm was the best viewing times for the commercial broadcaster of this event so, rightly or wrongly, the match went on at the scheduled time.

However, this followed hard upon a club fixture in Perth where player welfare was put at severe risk.

The match was played on 6 January and was scheduled for kick off at 5.30pm western time. However, the temperature at 5.30pm that day – the hottest in Perth for 23 years – was 40 degrees. There was talk of delaying the game to allow cooling, but the commercial broadcaster overruled these safety considerations and the match went ahead to provide best viewing times on the Eastern seaboard. A clear conflict between the monetary desires of commercial networks and player safety.

So the future of sport in the Australian summer could be a night time, or at least a dusk, one. Summer sports like cricket, tennis, cycling and soccer could now be riven with rescheduling, as participant welfare has to be taken into account. Players collapsing in the heat, vomiting on the court and suffering to provide broadcast television is clearly not a good look, and so it is to be hoped that the best broadcast time to get ratings will be the secondary consideration and well being of participants the first.

But that is the elite level; at amateur level things are also problematic. While a third grade cricket match in the western suburbs of Sydney is never going to be on TV, the fact is that player welfare will have to be taken into account and we could see a bizarre reversal of the traditional order of things, where amateur sporting fixtures have to be cancelled because the weather is too sunny.

Final note on this is that perhaps it is a possibility this report on Sport and climate change by the Climate Institute could be what it takes to get through to the Abbott Government we have a problem here.

Silly old scientists have made no impact on the Federal Government, but perhaps little old sport may. Perhaps next time an Abbott Government member’s child comes home and says “cricket was cancelled because it was too hot”, then maybe we’ll finally see some action on climate change.

As for the actual sport, the big event was Australia winning its highest ever soccer honour, the Asian Cup. Saturday night came around, and the Socceroos went out onto the park to play Korea Republic in the final. It was a great match, well-played by both teams, with fortunes swinging back and forth and far too much tension than most of us would like.

Australia opened the scoring in the shadow of half time through Massimo Luongo. He made a little space for himself and then sliced a powerful shot low and hard into the microscopic amount of space between the near post and the Korean keeper, the classic psychological blow, score, then walk off for half time, one team with the spirits buoyed, the other downcast.

The second half then began with the tireless Koreans working with all their might to get the equaliser, the tension mounted to unbelievable levels and I would suggest that in the last ten minutes I checked the time remaining 100 times. Then just when Australian fans were starting to contemplate hands-on-the-silverware, the Koreans scored, through Son Heung-min in the last minute of regulation time.

Talk about returning psychological serve. This was a body blow.

So we went to extra time and, if the regulation time was tight and unbearable, extra time was doubly so. The match went on, end-to-end with no break to the deadlock, until minute 105, when Australia grabbed what was to prove to be the winner.

Tomi Juric fought and fought again in the corner of the penalty box, hard against the byline with his Korean marker. He went over twice, and every moment you expected the ball to go into touch. But then like a phoenix, Juric emerged from the tussle with the ball at his feet, he tip-toed - balancing precariously - along the byline, and slotted a ball into the middle, where James Troisi thumped the ball into the roof of the Korean net.

It was another goal in the shadow of half time, this time in extra time. The players took their break, then returned and Australia defended for the remaining 15 minutes of extra time. Finally the whistle blew, and Australia had done it, won the Asian Cup 2015 2-1 after extra time.

It was a great win and a tribute to Ange Postecoglou the Australian manager; he had moved his team through the tournament with a tactical panache that the great Guus Hiddinck – former manager of the Socceroos – would have admired.

It was a great feeling in the end, but we can only hope the next time we win a trophy it can be done without causing near heart failure for everyone involved.

On Sunday night a rampant Australia, after losing four early wickets and looking vulnerable early, picked up yet another piece of cricket silverware, beating England in the final of the one day pre-World Cup tri series, which also involved India. The Australia's are looking hot favourites for the ICC World Cup, which is coming up later this month and being played in Australia.

One worry to come out of this tournament, however, has been the injury to all-rounder James Faulkner, who once again blasted runs at the death for Australia. He went off during England's chase with a side/rib strain and, with captain Michael Clarke also in doubt, Australia has two of  it's biggest weapons under a serious injury cloud.

The pressure is rising like the temperature for the home team.

RT @climatereality: A bare mountain in the winter is a sad sight. Get educated & take action: http://t.co/uRd2cFhvTP pic.twitter.com/yCP1nTjBJv