Hateful bigotry will tear our nation apart creating new divisions rather than healing old ones. Junaid Cheema appeals to all of us to choose hope over hate and give Muslims a 'fair go'.

DISGUST, DISDAIN and anger are understatements to describe the reaction we feel towards the sadistic crimes of ISIL. It seems no evil could compare to the acts of this criminal cult. Criminals who derive pleasure from the pain of their victims.

Disgust, disdain and anger are also understatements to describe our reaction to the sadistic crimes of the likes of Melburnian Peter Scully who operated a global pedophile ring and inflicted unspeakable sexual terror on girls as young as one. He taped his horrific crimes, terrorising his victims for the pleasure of his global viewers. Some girls survived the terrifying ordeal, others died. Pedophilia is a global industry, many Scullys hide in our midst, waiting to commit unspeakable crimes against our children, terrorising their victims, deriving pleasure from their pain.

The terror of global pedophilia is not a deflection from the evil of global terrorism but a reflection that evil in its essence is the same, regardless of the manifestation. Both these evils are hideous perversions of otherwise pure human expression — in this instance the spiritual and the sensual. Both these evils are global networks, both terrorise, both murder, both shatter lives, both are driven by hate and both are cancers that must be cut out. 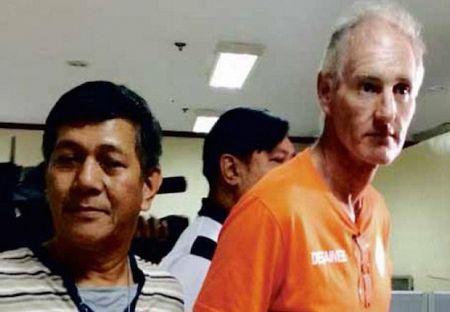 Peter Scully arrested in the Philippines for child porn-related offences

Cancers which must be cut out clinically rather than exacerbated by blunt bigotry.

The issue of terrorism since 9/11 seems to be getting progressively worse. Collectively blaming and antagonising the 1.6 billion Muslims in the world isn’t helping. To put in perspective, this population is equivalent to the entire global population at the beginning of the 20th century. It would be absurd to condemn all Muslims for the crimes of a criminal cult.

Evil exists, but addressing evil through hateful bigotry only creates more evil. Bigotry is contrary to an individual's right to a 'fair go' in this country. Australian Muslims are the most horrified by ISIL's crimes, because this ‘death cult’ of criminals has hijacked the Islamic brand. But what is the result? Islam is held responsible. Those who have a vested interest in promoting hate present Australian Muslims through the prism of extremism, constructing pseudo historical and pseudo social facts.

Brandis reflects on 'right to be bigots': http://t.co/0ZqPdavSgd a liberal perspective in case you're undecided

Every day, Australian Muslims are torn between the impostors who hijacked Islam and the bigoted Islamophobes who malign Islam through a flawed lens. Each serves as propaganda for the other, each re-enforces the other.

For those of us who truly choose hope over hate, know there is light in this darkness. Last weekend I witnessed just such a beacon of light and an example of the authentic character of our nation. Distinguished Australians from all walks of life including senior leaders from both major political parties and media personalities, united in celebrating the first anniversary of the IMA (Islamic Museum of Australia).

This Museum stands not just for a particular community group but as a testament to the Australian multi-cultural story. The story of a nation built on brave immigrants who have contributed the best of their cultures.

To commence the IMA celebrations a distinguished first Australian welcomed all those wishing to make a rich contribution to this great land. The Foreign Minister, Julie Bishop, praised the Muslim community for its rich contribution to Australia. The leader of the opposition, Bill Shorten, concurred, making the brave point

‘Friends, I understand Islam is a religion of peace.

I have heard many Muslim leaders say this - and I know they mean it.’

At the IMA anniversary dinner I attended, ABC presenter Jon Faine, united with the Muslim community in expressing his disgust with the current bigotry correlating it with his own experiences of anti-Semitism.

These distinguished Australians united all Australians on that day, advancing the cause of this nation, demonstrating genuine leadership. Unification which is truly based on the premise of hope, not bigoted hate masquerading as unity.

Fear and bigoted hate might attract a following but it's inherently evil and a cancer to our nation. In a highly interconnected and interdependent world, hateful bigotry has grave consequences and is contrary to the character of a nation built by brave immigrants. Some may proudly profess the right to be bigots, but the reality is we cannot afford to be bigots, for hateful bigotry is tearing this beautiful nation apart.

I’ll ride with you:

Ms Hanson: How can we be One Nation if you pit Australian against Australian?

Unity in diversity and the Gosford Anglican Church example

31 August 2016, 11:30am A service at the Anglican Parish of Gosford where many faith leaders including ...
Join the conversation
comments powered by Disqus
News updates