WE REALLY HAVE TO hand it to Tony Abbott — the Prime Minister who just doesn’t get it.

The man who holds the nation’s highest political office is our most unpopular leader ever — and it is no wonder why. Simply recounting the story of 12-year-old Claire Falls and her letter to Abbott is enough to explain why he is so despised.

Clair is a vision impaired soccer player and is passionate about her sport. Consequently, she is upset  the Abbott Government taken away the entire government contribution to the Australia's Paralympic Football Team — a measly $175,000.

I say taken away, but stolen might be a better description.

Because Abbott was able to find $1,000,000 for the Australian Ballet to enable them to buy a Melbourne mansion a residence for their ballet students. (Of course, the co-chair of Australian Ballet is Sarah Murdoch, wife of Lachlan Murdoch and daughter-in-law of Rupert Murdoch, and the Pararoos don't have a Murdoch on their board.)

#pmlive #auspol Abbott's Budget: Single mum be damned so he can give 1M$ to Sarah Murdoch's ballet school! http://t.co/jotwryQdtn #DDnow

He was able to find a few million to fund the recent tour of Australia by William and Kate, and another $150,000 for a two night tour by the playboy prince who likes dressing up in Nazi uniforms, and romping around Vegas in the nude. Harry's holiday in Australia last year appears to have been arranged to allow Abbott’s daughters to spend some quality time with him.

So, young Clair wrote to Abbott, describing her own plight and that of the poor Pararoos:

Claire's letter to the Tony Abbott

I love playing football and am playing my fourth season this year. I was diagnosed with low vision last year when I was playing with my junior league team. Having low vision for me means that I don’t have any 3 dimensional vision or depth perception. This obviously makes playing the game I love very, very hard.

Yesterday I read the article about the Pararoo’s funding going from $175,000 a year to nothing I couldn’t believe it!

I know that is not a lot of money to go around when it comes to supporting sports. I can see that because professional women in sport still have to work to make ends meet, and I know that there is even less for athletes with a disability. I even know that there is only a very small amount dedicated to blind sports.

Yesterday when I read about the Pararoo’s funding being cut off completely I couldn’t help but be angry and sad and disappointed.

I was upset to listen to the video on the Australian Sports Commission Website about how funding gets divided up, and I it makes me feel angry to think that football should ever be about winning medals or to read that funding was cut off because of the Pararoo’s ranking.

The Socceroo’s world ranking is at 62nd the Matilda’s are 9th, are they going to have there funding axed too? Of course they aren’t there would be a huge outcry!

Since when is sport meant to be about how many medals a team wins? What would happen if every Mum or Dad said to their kid ‘I’m not going to pay your football fees unless you win’?

Now that I have had time to adjust to my low vision it its not so bad but I still have to work ten times as hard as my new teammates to get the same results. For me there is no other option in football that suits my needs other than to play in a mainstream league, But the thing is their are some kids out there that have much bigger limitations than me.

If the Football Federation and the Australian Sports Commission are taking away the money for our countries only Paralympics football team that allows athletes with a disability to play, what hope is there for us kids? What do we have to aim for? What happens to our hero’s? How is that promoting encouragement, respect or inclusion?

My question and challenge for you is, if I can get 175,000 supporters to pledge and provide $1 each will you match it dollar for dollar?

She received a reply that simply boggles the mind.

God only knows who the fool was is in his office who wrote the reply for him, but Abbott signed the letter personally, so it had his full seal of approval.

Thank you for taking the time to write to me.

One of the most enjoyable things about being Prime Minister is hearing from young people like yourself.

I congratulate you on taking an interest in our system of government.

We are a great country and a great people.

One day it will be the responsibility of you and your generation to lead our country.

It says something positive about you that you were willing to take the time to write and share with me your thoughts about the issues that face our country.

Our democracy truly rests on the idea that every individual counts and everyone can have his or her say on the issues that matter most to them.

Thank you for your correspondence and I send you my best wishes.

Day by day this Prime Minister stuffs up. He has spent countless hours wringing all he can politically out of what he clearly hopes will be his Tampa moment – the MH17 tragedy – and has taken his eyes off the concerns of everyday people.

Abbott should realise discrimination against disabled athletes is unacceptable and, indeed, 80,000 concerned Australians have already signed a petition decrying his arrogance and heartlessness, and demanding the money be reinstated.

His reply to young Claire underscores what kind of man we are dealing with — and that's looking even sicker as the days roll on. 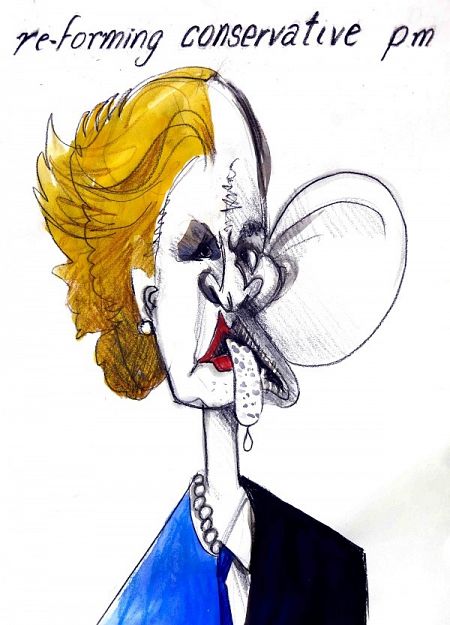 See more cartoons and animation by Matt Bissett-Johnson at mattbj.blogspot.com.