SUBSCRIBE   DONATE LOGIN SHOP
SUBSCRIBE   DONATE
How we prevented a Morrison dictatorship
How Howard screwed the Libs
U.S. site tries to ruin what makes fairy bread great
Bloody Idiot of the Week — Episode 28: Get used to it
Morrison's 'politics of retribution'
Health

Great pretenders: AHPRA, the AMC and the specialist medical colleges

The deceivers in the upper echelons of the Australian medical fraternity are on their way to being unmasked, says Dr Leong Ng.

(At the outset, it must be declared that the author writes this piece with tongue in cheek – for bogans, wealthy bogans and the rest (non-bogans) alike – following the modern Australian tradition of healthy disrespect for authority (and pretend authorities), and being seriously mindful of the unsuccessful non-amendment of s18c of the RDA.)

IN THE EARLY PART of the swinging '70s, when I was a young undergraduate medical student in UK, I generally mixed with non-medical friends, who later became diplomats, professors, luminaries, leaders and politicians — but we all had in common a desire to know how de-stress even in the most dire circumstances. One of my medical classmates even became a comedian-actor and pop star; another, a musician.

One favourite was a movie called American Grafitti and the part of the piece which stuck was about the art of pretending — after all, most health professionals should wield a dose of it!

It greatly helped me during my clinical studies in Cockney East End of London – a humbling and stark contrast from the ivory towers of my ancient alma mater. Others were the short anecdotes by Georges Mikes (of How to be an Alien fame).

The point is this: pretence is generally harmless but effective — then ineffective, after a while. But, escalated, it may be toxic. Even the great Dr Richard Asher wrote about this "art" in medical practice, in an anthology called Talking Sense (republished recently) and the great ways of pretending. Enduringly, we certainly know that it works well in sales-personship.

Fast forward to the transition of the millennium: readers are pointed to a non medical seminal work by political sociologist, Robert Alford.

He showed that reforms with “corporate rationisers” in place do not lead the improvement of the health outcomes of New Yorkers.

At the end of 2016, my Australian born senior colleague and I wrote a response to a brilliant British Medical Journal article about issues of informed consent for chemotherapy.

We felt we had to do it in the wake of what we believed as unjustified attacks on at least two senior Sydney based oncologists .

I was then contacted by a patient advocate, Dr Charlotte Williamson, a trustee of the internationally little known Picker Institute, which advocates for proper patient autonomy.

We discussed the Australian-UK commonalities between health care delivery and management — after all, I can lay claim to be a "whingeing pommy bastard". Charlotte pointed me to several very important articles that are now in my submission to a current Senate Inquiry.

One key message is that Australian journalist Adam Creighton pointed out in December 2016 that the number of health bureaucrats has now swelled into explosive proportions (my words). 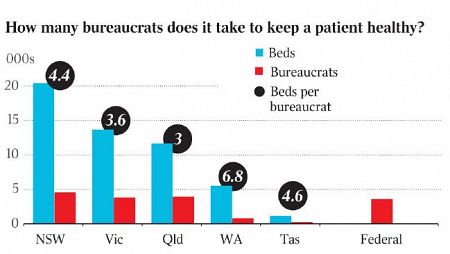 Their sheer numbers are no different, for example, of how misinformation is, or can be transmitted, stepwise — as gleefully illustrated here.

(I am serious hereon.)

However, the Australian public (and many fearful professionals) are finally waking up — or, at least becoming bolder. Dr Larry Huntoon, an international expert on sham peer reviews was encouraging in his numerous publications (linked from submission 91) from the USA.

Following the foundation of the Health Professionals Australia Reform Association, the entity became formally affiliated, on invitation, to the American Association of Physicians and Surgeons (AAPS) in early 2016. Critics say this is a "rightwing" organisation. I do not agree.

In April 2016, HPARA held its first Convention and the invited keynote speaker was Dr Huntoon. His was one of the many published and non-published presentations.

Now, events appear to have resurrected the ghost of Dr Thos Bonham, a little known London physician from the turn of the 16th century.

His case was not only celebrated as the Western world’s first apparent judicial review, but more importantly, led to the nurturing of the American Constitution and many law students’ debates about the meaning of natural law.

But what has that got to do with Australia?

Republicanism or the monarchist position? They are both related, I would humbly submit. More subtly, look at the entities, which acts as judge, jury and executioner: AHPRA, specialist colleges and perhaps the Australian Medical Council.

In more recent times, we have endured the distractions of Mr Trump’s comedy shows — even to the extent of having the Trans-Pacific Partnership summarily rescinded, perhaps a good thing for Australia.

Now, for example, the Therapeutic Goods Administration (TGA) shall not be a poodle of the FDA! This submission (no 5 and 5a) shows that uncritical copycat approvals are deeply concerning as are widespread sham peer reviews.

But watch this first!

The Fuhrer appeared furious! Narcissists, they say, just cannot be outdone (do read between the lines and let your imaginations go wild).

Moving back to Inquiries galore — several were announced this time.

An important Senate Inquiry, being announced in February 2016, was already in the running, was caused to be hung by the double dissociation. This great pretence did not prevent the Inquiry from being buried. Another parallel inquiry also shared the same status — that on Lyme and Lyme-like disease (and the intense bullying by Government-backed narcissists).

The second half of 2016 saw some exciting developments from these two Inquiries. The nouveau Australian Senate resurrected it and more. Maybe commentators on the double dissolution will now state that it has backfired politically!

Currently, we live in very exciting times (as we always do in Australia). A current Senate inquiry is receiving bold submissions of concern in the public domain about the great pretenders. It would be improper to add further commentary at this time so that alleged tortfeasors are democratically given their right to explain in writing and before the Committee.

We must be delighted that Australia has moved forwards with an embedded Bill of Rights in the Succession to the Crown (Request) Act 2013 – 2015 (Commonweath and various jurisdictions).

But, the mystery roundabout turn of the Commonwealth Act, with a proclaimed “shelf life” of 2 days in March 2015, raises questions for the Australian Government’s duty of candour by politicians (who are, essentially, public servants).

For the non-cognoscenti, any act, though having passed through both houses of Parliament and receiving royal assent, cannot be law unless proclaimed.

Is the Government concerned about its treatment of asylum seekers or, is there something else related to this? In any case, the road of progress to a republic still needs respect for basic human rights, which the medical mafia desperately lacks.

Subscribe to IA for just $5. It's good for you!

The OHO Act 2013 revisited – is it really protecting the public?

Great pretenders: AHPRA, the AMC and the specialist medical colleges

10 March 2017, 3:30pm The deceivers in the upper echelons of the Australian medical fraternity are on ...
Join the conversation
comments powered by Disqus
News updates