Do we want to stop governments flouting the law? Are you serious Senator Brandis?

Our chief law-maker, Attorney-General George Brandis, says the Abbott government is above the law and wants to appeal our rights as citizens to challenge this in the courts. As these self-same citizens are also voters, has he now completely lost the plot?  Lachlan Barker reports.

THERE HAS been a lot going on in recent weeks while we wait for the Abbott government to implode.

It would be hard to come up with a more turbulent period for any Australian government in living memory. Indeed most comparisons are to the final days of the Whitlam government.

It started with #choppergate and the expenses scandal swirling around speaker Bronwyn Bishop. Then came the Dyson Heydon controversy at the Royal Commission into trade unions. And now Kathy Jackson has been ordered to pay a staggering $1.4 in compo to the Health Services Union (HSU). As Peter Wicks reports there could be more trouble to come for Kathy, the former pin-up girl of the federal government whom Abbott lauded as “heroic”.

But here in the environment world, the news has been dominated by the Federal Court Case’s decision on Adani’s Carmichael Mine in Queensland.

The court set aside the application after the federal Environment Minister Greg Hunt breached the Environmental Protection and Biodiversity Conservation (EPBC) Act by failing to consider conservation advice by the Department of Environment on the impact of the mine on two vulnerable species — the yakka skink and the ornamental snake. 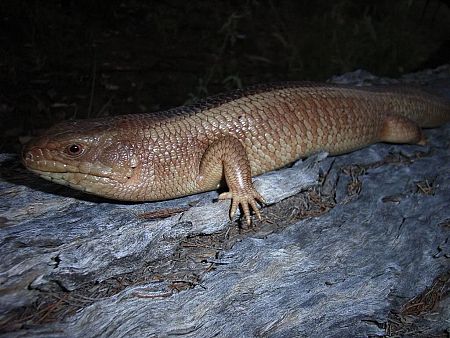 The yakka skink, one of the "vulnerable species" that has caused a political storm around Adani’s Carmichael mine

Better legal heads than mine have outlined the situation clearly, and this article republished here at IA from The Conversation is worth reading along with Geoff Cousins’ in The Age.

The essential point, however, is that all the Mackay Conservation Group did is what any citizen currently has the right to do: to insist that the federal government comply with the law!

Having stuffed up, the government chose to go on the attack with Attorney-General George Brandis now declaring he’ll change the law to stop members of the community insisting governments comply with the laws of the land (not to mention advice by their own departments).

Brandis proposed changing the EPBC so that only those "directly affected" can challenge a decision.

Even here, defining who or what is "directly affected" is already the cause of much discussion.

However the usual suspects – the pro-mining lobby – led by, in this case the Queensland Resources Council (QRC) have joined with the federal government bleating that this use of the courts by citizens is going to cost jobs, trotting out again and again the debunked figure of 10,000 jobs (the actual figure is 1464 provided by Adani’s own expert).

On checking petitions put out by both camps (mining v. public), it is clear the public hasn’t been taken in by the myths, inflated figures and outright lies.

In the government’s camp is the Queensland Resources Council’s petition to support Brandis’s attempts to reduce a citizen’s democratic right to insist governments comply with the laws of the land.

This petition has this scream of outrage on its web page:

‘Enough is enough! Billions in revenue and tens of thousands of needed jobs in new Queensland mines are being stopped by activists exploiting legal loopholes.

Sign this petition if you believe governments should have a system that supports jobs and investment.’ 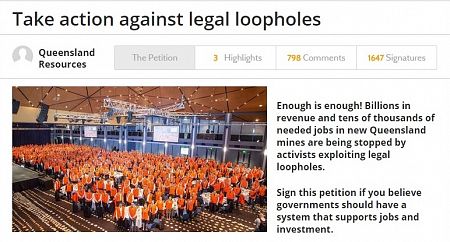 The QRC might be worked up, but no one else appears to be in a lather about it.  At time of writing, it had only 1662 signatures. The petition went live on 5 August, thus, it took two weeks to get this level of support.

Over in the people’s camp, the petition set up by the Environmental Defenders Office (EDO) of Queensland was headed: 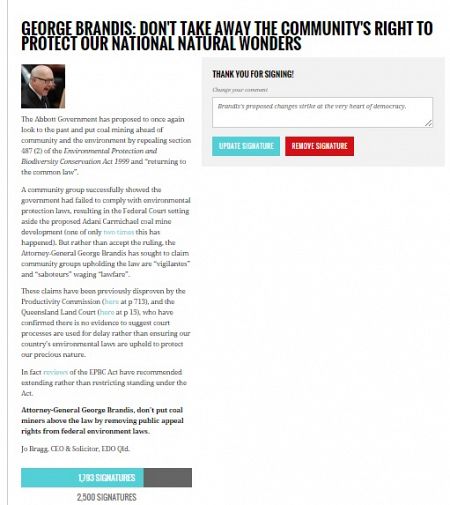 The EDO petition went live on 19 August, and captured more signatures than the QRC’s total in just over a day.

As I write, 2358 people have signed the EDO petition supporting the rights of the citizenry to challenge the government in court.

Indeed, they have signed to support democracy fifteen-fold faster than the pro-mining petition.

If that’s not a clear indicator of where our hearts lie then I don’t know what is.

Hey just a reminder Senators - those pesky citizens who currently have the right to stop elected leaders flouting the law also VOTE! #auspol

The state of play is that Brandis is planning to bring the proposed changes to parliament this week or next. The Greens and Labor oppose the change and the amendment is already doomed as independent Senators weigh up the likelihood of getting re-elected by trashing the rights of citizens to mount a legal challenge if the government of the day flouts the laws of the land.

Govt has now decided which bits of its enviro laws it wants to axe - and it's not what Brandis just told the Senate http://t.co/ph2RG7eamr

Stand up for democracy! Subscribe to IA for just $5.